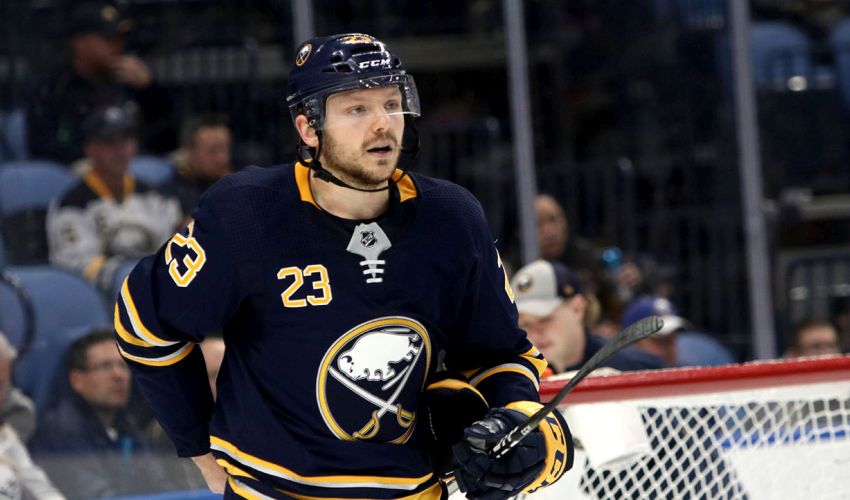 Not surprisingly, Reinhart, who has played 331 regular-season NHL games, has never sniffed the postseason.

But last spring, Reinhart, 23, played some meaningful contests as Team Canada captured a silver medal at the World Championship in Slovakia. In 2016, fresh off his rookie season, he won a gold medal at the tournament.

“It’s an exciting opportunity,” Reinhart said Wednesday following a late-summer skate inside Harborcenter. “You finish early here and get a chance to go over there. The goal is to play some meaningful games. …

“The goal going into it is to feel your best when it comes down to (the meaningful games at the World Championship). … I thought I did that.”

So far, Reinhart, who compiled three goals and five points in 10 outings for Canada, has only played high-stakes games as a pro at the World Championship. That’s the biggest reason he will be starting this season with another new coach, Ralph Krueger, who was hired in May to replace Phil Housley.

Reinhart refused to dwell on the past Wednesday.

“You want some stability with (coaching),” said Reinhart, who has also played for Dan Bylsma and Ted Nolan. “With that being said, my focus is on Ralph and coming into this year.”

During the World Championship, Krueger quickly made a positive impression by visiting Reinhart and captain Jack Eichel.

“It shows a lot,” Reinhart said of Krueger’s presence overseas. “He wants to learn. He wants to get involved as soon as possible. (I) had some good talks with him there and in Vancouver at the draft as well. We’re all excited about the opportunity to work with him and I think that feeling is mutual.”

He added: “First and foremost, (Krueger is) a good person. He’s easy to talk to. He goes out of his way to make it known what he wants out of you.

“We’re only going to learn that more as we get going here into camp. We’re looking forward to that communication and leadership that’s going to come from him.”

Reinhart, one of the longest-tenured Sabres, has been demonstrating more signs of leadership. In June, he asked general manager Jason Botterill if he could join the team’s higher-ups in Vancouver, his hometown, for some of the NHL Draft festivities.

“I know how overwhelming that (draft) experience is and you’re meeting so many people,” Reinhart said. “I think if you can meet someone who is kind of established on the team, it just provides that much more comfort, to have someone there who has been through that experience as well.

“It wasn’t too far out of the way for me. I thought it would help out being there, and (I) obviously wanted to show my commitment to the Sabres’ organization from being around as much as possible.”

Reinhart wasn’t around a year ago at the start of training camp. A holdout cost him about five days before he signed a two-year, $7.6 million contract. He will be a restricted free agent again following the upcoming season.

Despite the late start, Reinhart enjoyed a solid season, scoring 22 goals and setting career highs with 43 assists and 65 points in 82 games.

But like a lot of his teammates, he started slumping late in the miserable campaign. Over an 18-game stretch from late February into early April, he mustered only two goals and five points.

The Sabres, meanwhile, completely imploded, losing 15 out of 16 games at one point.

If the Sabres improve this season or even contend for that elusive playoff spot, Reinhart will almost certainly be at the forefront.

“There are certain goals I set for the summer and coming into here,” Reinhart said of his offseason. “With both the staff here going into the summer and all my guys back home, I think we accomplished that. It gives me a lot of confidence moving forward into camp.”

Notes: Sabres rookies will practice for the first time this afternoon. They open the Prospects Challenge tournament Friday against the New Jersey Devils at Harborcenter. Center Jack Hughes, the first overall pick in June, is on New Jersey’s roster. … Sabres veterans report for their training camp physicals next Thursday. … Former Sabres winger Drew Stafford will be attending the Minnesota Wild’s camp on a professional tryout, the team announced Wednesday. Stafford, 33, spent the last two seasons with New Jersey.