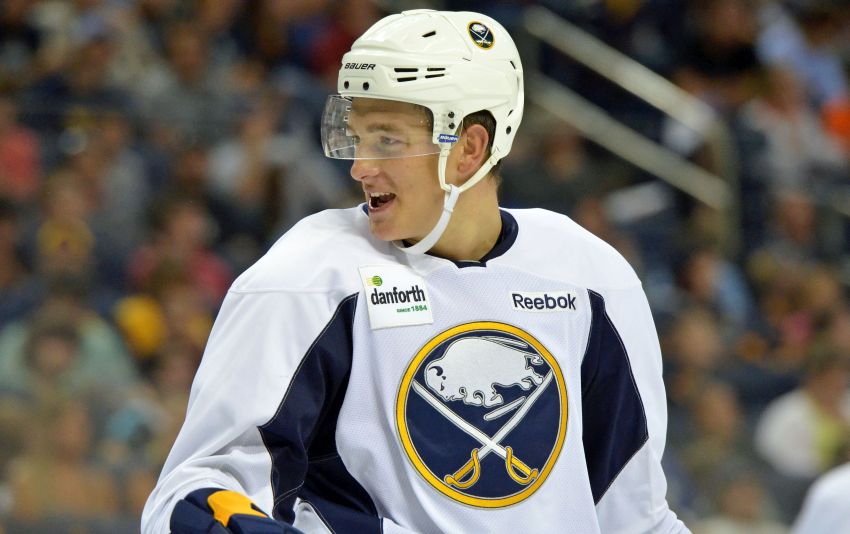 BUFFALO – After a seven-game NHL trial as a rookie early last season, Sabres prospect Nikita Zadorov feels ready for primetime. The 19-year-old defenseman believes an impressive training camp could force the Sabres to keep him.

“I’m a year older, a year stronger – everything,” Zadorov said earlier this week. “I have experience.”

Zadorov will be at least a few games richer in experience by next week, after the NHL Prospects Tournament in Traverse City, Mich. The Sabres open at 4 p.m. today against Carolina.

Their 24-man roster for the eight-team tournament features an array of youngsters. There are four first-round picks, including slick center Sam Reinhart, the No. 2 pick in June, and Zadorov, the No. 16 selection in 2013.

Some game action in a Sabres jersey will be special for Reinhart, who could crack the opening-night lineup.

“Ever since the draft, I’ve pictured myself putting it on for real,” Reinhart said. “It’s pretty close, and I’m looking forward to it.”

Then there are prospects like winger Jordan Samuels-Thomas, a 2009 seventh-round pick the Sabres acquired in July. At 24, he’s the oldest player on the roster. No one else was born before 1993.

Putting a jersey on for his first professional action will be a memorable experience.

“I know when I actually throw it over my head I’m going to have a big smile,” Samuels-Thomas said. “I’m going to try to keep it. But it’s something you work toward your whole life, right? I’ll definitely appreciate it a lot. It’s a huge blessing to have this opportunity.”

Most tournament prospects aren’t competing for NHL jobs this season, so Zadorov’s in a unique situation. He faces a stiff challenge during the next month.

The Sabres have a logjam on the blue line. Coach Ted Nolan detests playing teenagers. And Zadorov, of course, is still very raw. His penchant for hitting often gets him out of position.

“They want me to find timing, when should I hit, when should I stay back, don’t hit, don’t rush – everything,” Zadorov said. “I think it’s going to come with experience. Every game I’m going to be better.”

The Russian spent two months this summer in Buffalo skating and packing weight on his 6-foot-5 frame. He’s listed at 238 pounds, 19 more than last season.

“It’s maybe next (the) step to (a) different level, finally to make the NHL and play here and be ready,” Zadorov said about the summer.

Zadorov said his brief experience “showed me everything about the NHL.”

The rest of the tournament schedule:

Notes: Training camp will open Thursday when veterans report for physicals and testing. The first on-ice sessions are Friday. … Toronto has invited former Sabres defenseman Henrik Tallinder to training camp on a tryout.