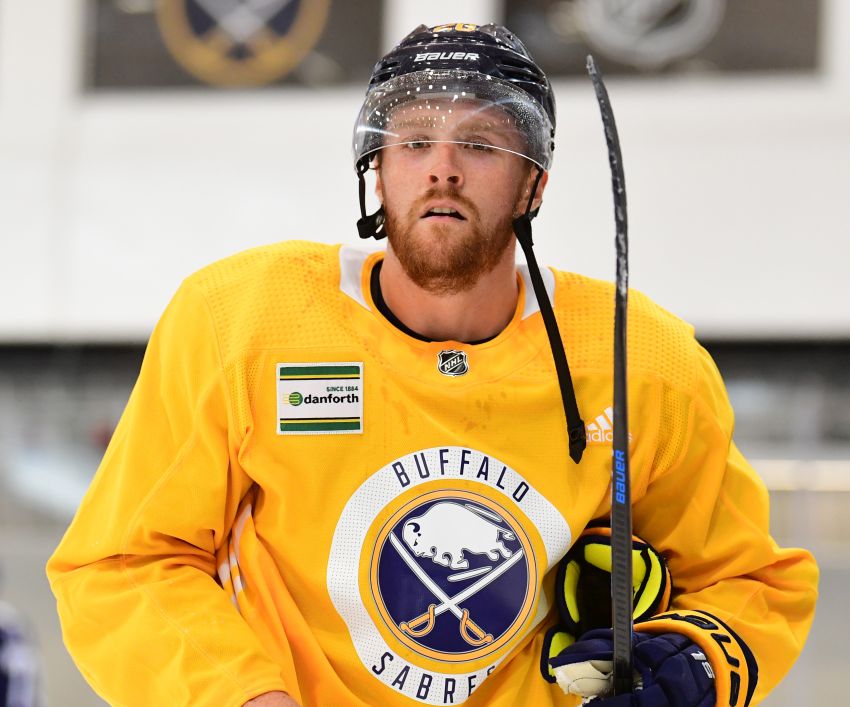 BUFFALO – Scott Wilson couldn’t even walk yet. Still, after breaking his right ankle, the Sabres winger wanted to enjoy some hockey-related activities.

So instead of staying idle, at about the four-week mark of his recovery, Wilson, 26, started going on the ice and shooting pucks … from a chair.

“As basic as you could think of it, that’s pretty much what it was,” Wilson said prior to Saturday’s 3-2 overtime loss to the Boston Bruins inside KeyBank Center.

“I’d be sitting in a chair and shooting and all types of different things,” Wilson said. “We tried to mix it up just so I didn’t put any pressure on it.”

At about the six-week mark, the cast was removed and Wilson could put a little pressure on the ankle.

“Then you graduate to standing,” Wilson said.

Wilson, who broke his ankle in practice Sept. 30, was hellbent on making his rehabilitation a positive experience.

“As soon as you start getting negative about injuries or feeling sorry for yourself, I think that’s when people start to spiral downhill,” Wilson said. “That’s one thing I’ve learned over my injuries is just you got to stay positive.”

Wilson just rejoined his teammates for practices. Even in just a handful of sessions, he can feel a difference from his work.

“With hands and shooting-wise, I feel the best I’ve ever felt,” Wilson said.

Wilson, who hasn’t played a regular-season contest since April 7, believes he’s about two weeks away from game action.

“Trying to get that timing back is probably the biggest thing, I think, when you’re hurt,” Wilson said. “Your injury might be healed, but I think your brain needs to catch up to speed a lot more than most people think.”

In a dreary 2017-18 season, Wilson was one of the Sabres’ only surprises, compiling six goals and 14 points in 49 appearances following his December arrival from the Detroit Red Wings.

After some short summers – he won two Stanley Cups with the Pittsburgh Penguins – Wilson used the long offseason to his advantage, packing on 15 pounds. He was expected to be a strong contributor again on the fourth line when he broke the ankle for the second time in two years.

“Aside the from the injury, I’ve had even more time to refresh,” Wilson said. “I said at the beginning of the year, last summer was kind of the first summer that I had with some serious time and not just eight weeks or whatever. So I’m just kind of mentally recharged.

“My ankle’s starting to feel good every day. It’s definitely a little bit of an uplifting feeling.”

“Zemgus has done a terrific job,” Housley said. “I think with Larsson and him together, they have a unique chemistry, and whoever we put down there with them, they’re almost like a fix-it, so to speak.

But Pilut, who turns 23 today, struggled in Thursday’s 4-1 loss in St. Louis. So defenseman Nathan Beaulieu, who was playing well before an upper-body injury shelved him five games, replaced the Swede against the Bruins.

In other lineup news, goalie Linus Ullmark was still feeling ill, so the Sabres recalled Scott Wedgewood from the Rochester Americans prior to the game.