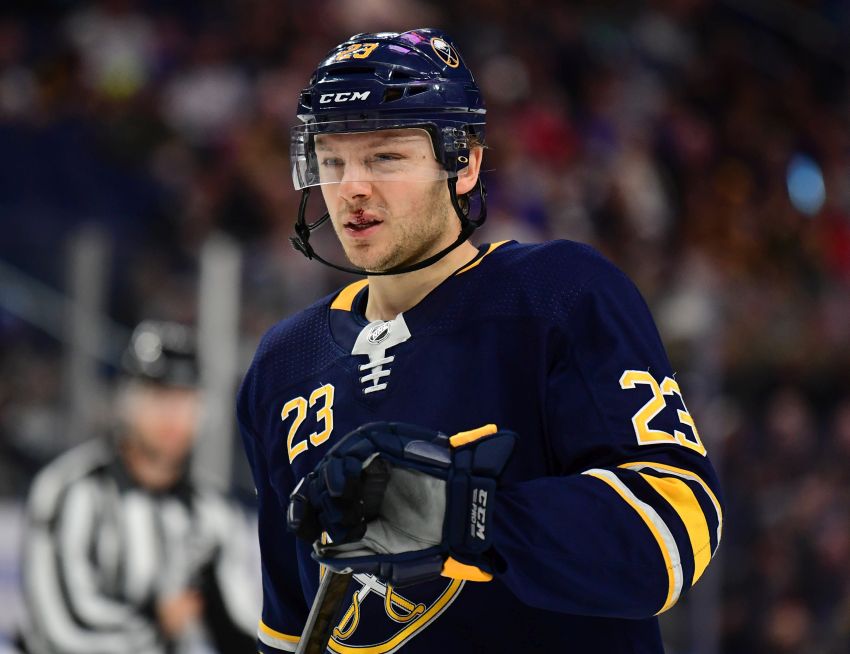 BUFFALO – Sam Reinhart and Jack Eichel have been Sabres teammates for 263 games over the last three-plus seasons.

In that time, Reinhart, 23, has compiled 67 goals and 151 points. On two occasions, the winger enjoyed a three-goal outing. In five other games, he recorded three points.

But Saturday afternoon’s 4-3 come-from-behind shootout win against the Vancouver Canucks might’ve been Reinhart’s best performance ever, according to Eichel.

“I thought Reino played awesome,” Eichel said. “I thought this was one of the best games I’ve ever seen him play. He was dominant.”

Dominant might be stretching it a bit. Still, Reinhart performed splendidly late, igniting the Sabres’ two-goal comeback in the final 2:27 of regulation.

Reinhart tied the game 18:13 into the third period, burying defenseman Rasmus Ristolainen’s rebound past goalie Jacob Markstrom from low in the left circle. That was his only shot of the game.

Prior to scoring just his second goal this season, Reinhart assisted on linemate Jeff Skinner’s tally.

“For whatever reason, those pucks haven’t been finding me, but it was nice for one to find my stick there tonight,” said Reinhart, who missed on his shootout attempt.

Reinhart looked so good earlier Sabres coach Phil Housley promoted him to the top line beside Eichel and Skinner, breaking up one of the NHL’s best lines.

Housley shifted Reinhart – “I thought Reino was going,” he said – to give the Sabres some life in the third period.

Reinhart has started slowly this season, at least goals-wise. Of course, that is nothing new. Last year, he enjoyed a monster second half, finishing with 25 goals and 50 points.

Through 17 games, he has compiled 12 points. In Thursday’s 6-5 overtime win in Montreal, he registered two assists.

The Sabres are 8-0-0 this season when Reinhart registers a point.

Reinhart left the game in the first period after Rodrigues hit him in the face with the puck. He returned for the second sporting some stitches on a bloody lip.

Eichel, meanwhile, left with a lower-body injury four shifts into the contest. When the captain did not come out for the beginning of the second period, it appeared his afternoon was over.

But Eichel skated out several minutes into the period, drawing cheers from the crowd inside KeyBank Center.

The Sabres traded defenseman Taylor Fedun to the Dallas Stars for a conditional seventh-round draft pick in 2020 on Saturday.

Fedun, 30, registered five assists in nine outings with the Rochester Americans this season. He played 34 games with the Sabres over the last two seasons, compiling eight assists.

The Princeton product has scored two goals and 15 points in 46 career NHL appearances.

Fedun’s departure means the Amerks, who possesses perhaps the AHL’s best depth, have nine defensemen on the roster.

Over the past three weeks, the Sabres have taken a different approach to winger Tage Thompson’s development.

In Thursday’s win, Housley thought the play of the Sabres’ fourth line, which he said has been “very, very good,” dipped a little bit.

The 6-foot-6, 205-pound Thompson has compiled one assist in 10 outings this season. Housley said he has patiently waited for his opportunity, spending time with coaches after practice.

“He’s a terrific teammate,” Housley said. “He comes to work every day, he does extra to try to get himself prepared. He’s part of the culture. He fits right in with our group.”

Thompson played just under 10 minutes Saturday, recording a minus-1 rating.

As the goalie slid across the crease, he snared Horvat’s shot from the right circle.

“I don’t think I’ve been robbed that hard in a long time,” Horvat said. “Sometimes you’ve got to tip your hat.”