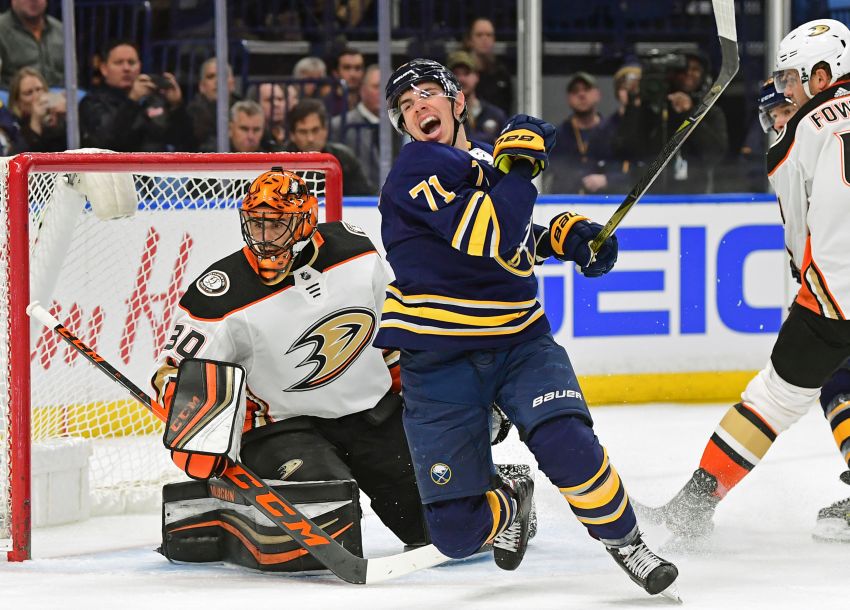 BUFFALO – Evan Rodrigues won’t deny the drought is on his mind. While it might not be eating the affable Sabres center up, he’s aware he hasn’t scored a goal yet this season.

“Second game of the year I get robbed on an unbelievable save,” Rodrigues said Friday inside KeyBank Center. “It seems like I can’t get a break since. It’s going to go in one of these days.”

If New York Rangers goalie Henrik Lundqvist hadn’t slid across the crease and stacked his pads to deny Rodrigues’ backdoor shot Oct. 6, he would’ve had his 13th NHL goal.

“One of these days it’s going to go in and then the floodgates are going to open,” Rodrigues said after the Sabres prepared for this afternoon’s tilt against the Vancouver Canucks. “I know that. Instead of getting frustrated, you have shoot the puck even more, keep it simple, put pucks on net.”

The Boston University product did all of those things in Thursday’s 6-5 overtime win in Montreal. In one of his best NHL games, he registered two assists and pumped five shots on Canadiens goalie Carey Price, tying his career high.

Rodrigues, who was shifted to center Thursday morning, showcased his speed all night.

“I got in some good situations where I could build some speed and get up in the play and make things happen, the ice was good and (I) just seemed to get the bounces, feet were moving,” Rodrigues said. “Just really got to pop one one of these days.”

Still, while Rodrigues hasn’t scored a goal since March 29, he has been generating offense. He has six assists this season and 11 in 18 outings since scoring his last goal.

Rodrigues created both of linemate Vladimir Sobotka’s first-period goals, displaying strong chemistry beside the newcomer and Sam Reinhart. Rodrigues fed Sobotka on a two-on-one 6:08 into the contest before the Czech buried his rebound at 14:40.

“It’s easier to build speed as a center when you’re coming from underneath,” Rodrigues said. “I thought I was able to do that. Reino made some great plays on the wall to get the puck to me in the middle.

“It just seemed like after that first couple shifts of getting some good chances I was feeling it, wanted it more and more on my stick. I wanted to make things happen and that’s the mentality I got to have going into every game.”

Rodrigues grew up playing center before becoming a winger in college. But two years ago, the Sabres moved him to the middle. He has moved back and forth since then.

This season, Rodrigues started as the Sabres’ fourth-line center between Zemgus Girgensons and Jason Pominville.

Sabres coach Phil Housley said he flipped Rodrigues and Sobotka on Thursday “for some more balance.”

“I just felt that Evan did a really good job previously when he was with Zemgus and Pominville,” Housley said. “I think that was our most consistent line, he was in the middle.”

“You have the puck way more on your stick and you’re able to make plays, almost be a passer out there,” Rodrigues said. “That’s what I’m trying to do. I feel like I can compete at both and I’m good at both, so wherever the coach needs me, that’s where I’m going to play.”

Housley said: “I just like the way he plays the game in the middle of the ice for us, the way he disperses the puck, the way he creates speed and you get this push through the neutral zone.”

Offensively, Rodrigues, who scored 61 points in 41 games as a college senior, believes he possesses a higher level.