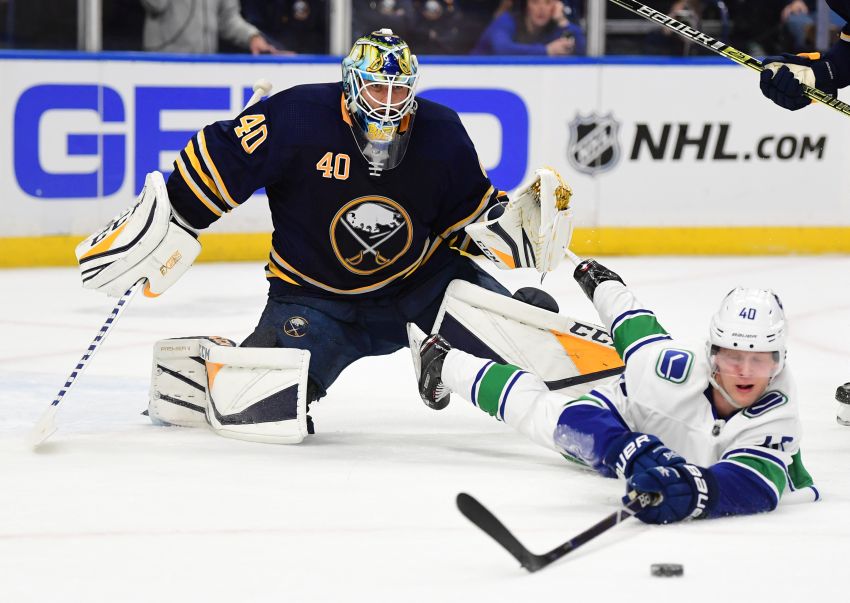 BUFFALO – Who would’ve thought the Sabres, the NHL’s laughingstock a year ago, would suddenly become such a resilient bunch?

Just 17 games into the season, coach Phil Housley has already developed trust among his players, helping the upstart Sabres build an identity and mature.

Take, for example, Saturday afternoon’s wild 4-3, come-from-behind shootout win against the Vancouver Canucks, a game in which the Sabres rallied from a two-goal deficit in the final 2:27 of regulation.

“The resiliency in this group, that never-out-of-it attitude, the ability to continue to fight, it’s tremendous, and it’s been throughout the whole locker room,” Sabres captain Jack Eichel said. “It’s so important in a long season. It’s not always going to be pretty.”

Saturday’s tilt against the Canucks before a crowd of 17,541 was ugly at times. The Sabres imploded late in the second period, allowing two goals in the final 1:44.

Still, they possessed hope until the bitter end. With Sabres goalie Carter Hutton off for an extra attacker, winger Jeff Skinner scored his 12th goal in the last 13 games. Then winger Sam Reinhart followed with 1:47 left in the third period.

The Sabres then killed off a penalty to close regulation and again at the end of overtime.

Eichel and center Casey Mittelstadt scored in the shootout. Then Hutton stopped Nikolay Goldobin to secure the Sabres’ second straight comeback victory. They also rallied in the third period Thursday in Montreal to win 6-5 in overtime.

How rare is a triumph like Saturday’s? It marked only the seventh time in franchise history the Sabres won a regular-season contest by overcoming a multi-goal deficit in the final 5:00 of regulation. They hadn’t done it since winning a 3-2 shootout over the Canadiens on March 24, 2010.

“Our guys have the belief they can come back in any point in the game,” Housley said. “Obviously, we don’t want to put ourselves in that position, but I give our guys credit, they fought right to the end. It was one of those games where you could easily let that one slip.”

Eichel said the message the coaches are trying to relay has “been received very well by the locker room.”

Housley said that identity is “hard work and checking detail.”

“When we do those things really well … we have possession of the puck, we’re attacking,” Housley said.

That Sabres attacked early in what defenseman Nathan Beaulieu called “a weird one out there.” Beaulieu opened the scoring by pinching in and connecting on winger Kyle Okposo’s pass 4:43 into the game.

“The first (period) was fast, second was a lot of whistles and I think it kind of took us until the third period to really get into it,” Beaulieu said. “It seems like we’re a desperate hockey team when we play from behind. …

“I really like the resilience of our club tonight. I thought we showed a lot of heart, a lot of grit.”

Housley said Hutton, who made 36 saves, showed his mental toughness. Loui Eriksson and Jake Virtanen scored late in the second period before Erik Gudbranson put the Canucks up 3-1 early in the third period.

On Virtanen’s goal, Hutton played his angle incorrectly, allowing a soft shot to slide by him. But Hutton settled down, securing his sixth win this season with two shootout saves.

“He’s mentally tough,” Housley said. “I think he’s got a great foundation, which starts in practice, where he works very hard. That relays into the game. There’s going to be times he’d probably want that one back, but he’s a fighter. He doesn’t carry that goal into the rest of the game, he gets composed again.”