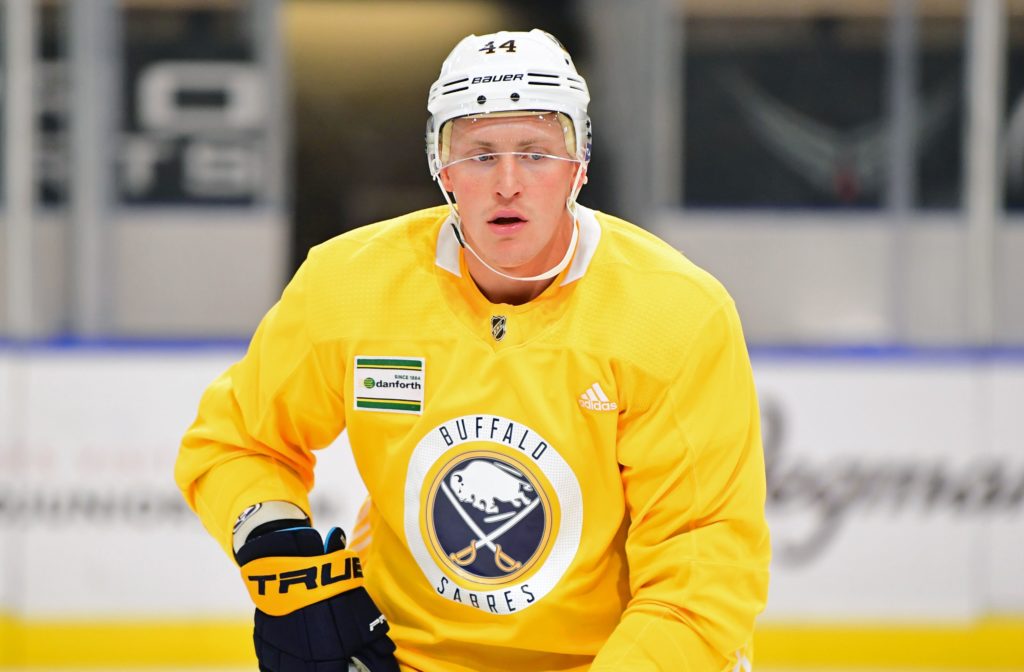 BUFFALO – As Nick Deslauriers morphed into a spare part last season, sitting out regularly as a healthy scratch, the Sabres winger tried using his time wisely.

So during games, Deslauriers would watch former teammate Marcus Foligno, studying how his friend utilized his 6-foot-3 frame in a variety of roles.

Then the Sabres traded Foligno to the Minnesota Wild and lost William Carrier in the NHL Expansion Draft early in the summer, leaving them a little light on muscle up front and creating an opportunity for Deslauriers.

“We need somebody to do it,” Deslauriers, the Sabres’ top fighter, said of playing a heavy style. “I’m ready to take that role.”

Of course, the 6-foot-1, 215-pound Deslauriers, who has stayed with the Sabres since arriving late in 2013-14, has plenty of competition. Right now, a week before the season opener, four or five forwards are competing for one of the final two roster spots.

On Wednesday morning inside HarborCenter, hours before Buffalo’s fifth preseason contest, Deslauriers talked optimistically about carving out a role as a fourth-liner and penalty killer.

“This camp, I feel like I can embrace this role and try to prove that I can be a good PK guy and just bring energy in any kind of way,” Deslauriers said.

But less than an hour after Deslauriers spoke, his battle for a roster spot became a heck of a lot tougher. The Sabres claimed 6-foot-3, 219-pound winger Jordan Nolan off waivers early Wednesday afternoon from the Los Angeles Kings.

Nolan, the son of former Sabres coach Ted Nolan, won two Stanley Cups with the Kings as a gritty fourth-liner.

Still, Deslauriers, an acquisition by former general manager Tim Murray, could have a future here. After all, some of his competition, Justin Bailey and Nick Baptiste, have options to go to the minors. Instead of sitting out in the NHL, the Sabres might want the youngsters to play in the AHL.

Whatever the case, if Deslauriers makes the Sabres, he will likely be new coach Phil Housley’s 12th or 13th forward.

“He’s been excellent in camp,” Housley said. “He’s gotten a lot of responsibility in special teams areas, he’s been killing penalties, which he’s really done a good job. He’s got to bring a physical aspect to the game.”

Clearly, Deslauriers, 26, feels rejuvenated following a career-worst season in which he compiled zero goals and two assists in 42 games. After a knee injury sidelined him five weeks last fall, he had trouble cracking the lineup and earning notable ice time.

“This year, I just want to prove … that I want to be back as a regular,” Deslauriers said.

Rather than staying in Buffalo during the summer, Deslauriers went home to Quebec, where he bought a house.

“It felt good to kind of check out after that season I had,” he said. “I came in better shape, refreshed. I was looking forward to this start, and when all the changes happened, it was kind of a second wind for me. I was really happy.”

Deslauriers’ inability to fight regularly last season – he had only four – frustrated him. Very quietly, he’s one of the league’s most lethal scrappers.

But with fighting decreasing, Deslauriers knows he must evolve. These days, coaches rarely keep a designated fighter. Housley has used him as a penalty killer again this preseason, a role he embraces.

“I feel comfortable,” said Deslauriers, who has 12 goals and 18 fights, according to hockeyfights.com, in his 211-game career. “Even the first game out there it was awkward a little bit. I felt right back at it on the second wave. I love playing PK.”

On the fourth line – Deslauriers played left wing beside center Jacob Josefson and Johan Larsson on Wednesday – he wants to forecheck aggressively to create turnovers.

“When I go in the corner, I’ll obviously try to hurt somebody,” Deslauriers said. “I’m not saying I’m a dirty guy, but just sending a message I’ll be there all night.”

He added: “I love doing the dirty work.”

Deslauriers also believes he can add energy “just by shooting a puck.”

“The last game I had two shots,” he said. “I think last year I probably had two shots in 20 games (he had 26 shots the entire season). So it’s just trying to bring a little bit of everything.”