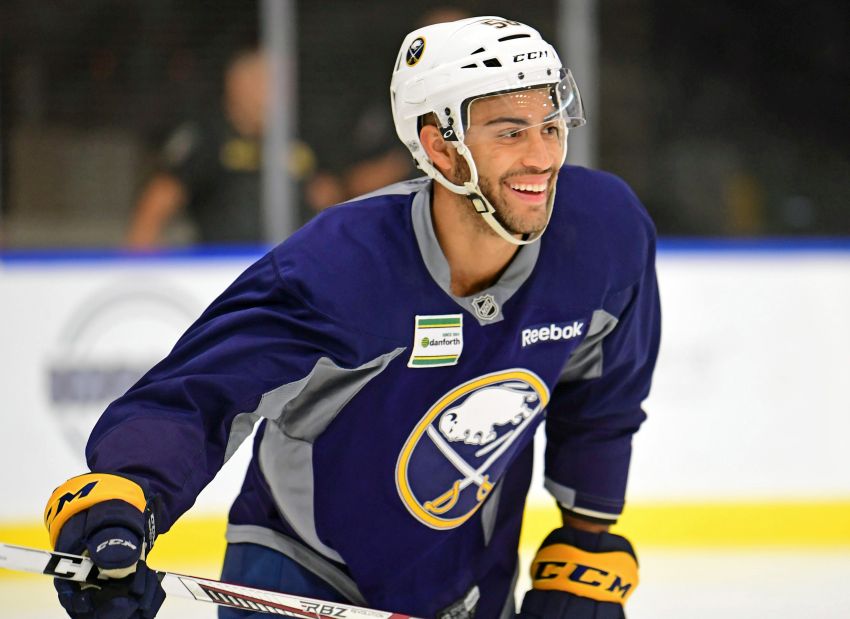 BUFFALO – By March, after seven weeks of regular duty, Sabres winger Justin Bailey said he started getting used to the NHL lifestyle.

Thanks to another torrid scoring stretch in the minors, Bailey traded bus travel and his AHL salary for chartered airplanes and a paycheck almost 10 times larger.

The Sabres wanted Bailey, 22, to thrive, so they awarded him consistent action. He even skated on a top scoring line beside center Ryan O’Reilly and Kyle Okposo for a bit.

It appeared Bailey, who had 23 goals in 56 games with the Rochester Americans, would stick around until the season ended. But he mustered only two goals in 32 appearances with the Sabres.

On March 22, after his 16th straight goalless game, the Sabres demoted Bailey. Shortly after that, the struggling Amerks scratched him.

“Going back down was a little bit difficult,” Bailey said Thursday inside HarborCenter. “I think … for everybody it was kind of the end of the season. … It was just a difficult situation down there as a whole and for me as well.”

The speedy Bailey, of course, is still one of the Sabres’ top forward prospects. He has already morphed into an elite AHL scorer. After compiling 43 goals in his first two seasons, the 2013 second-round pick is expected to graduate to the Sabres this year.

Bailey has a terrific opportunity to impress the Sabres’ new regime during rookie camp, which opened Thursday. The Williamsville native is the most experienced player on the roster for the Prospects Challenge tournament, which starts tonight when the Sabres play the New Jersey Devils at HarborCenter.

After five camps and 40 NHL appearances, the 6-foot-3, 214-pound Bailey knows he must stand out among the other youngsters.

“My goal is to play in the National Hockey League,” he said. “I think anytime you have a chance with guys that are the same age as you, if not younger, you want to really show yourself … as a dominant player, and that’s not just scoring goals. For me, it’s asserting myself in the corner, being stronger than guys, showing that I can play with the weight I put on this summer.”

Bailey still stood out at times with the Sabres, utilizing his speed to create scoring chances. His first NHL goal Jan. 3 against the New York Rangers was a highlight-reel score. He just couldn’t finish most of his opportunities like he did with Rochester.

So what must Bailey do to stick with the Sabres?

“Even his shift lengths, sometimes he looks really good for the first 20 seconds and then I don’t think he finishes his shifts,” he said. “He’s got to be consistent at that every day. It’s hard to get up to the NHL. It’s even harder to stay in the NHL. I think that’s what he’s started to realize.”

Having Taylor back, an influential presence in Bailey’s career, is special. Taylor was an assistant in Rochester during Bailey’s rookie season before getting fired. After a season coaching Pittsburgh Penguins AHL prospects in Wilkes-Barre/Scranton, new Sabres general manager Jason Botterill brought Taylor back.

“He’s someone who was huge for me,” Bailey said. “(My) first year … I struggled, and I wasn’t a happy camper, I don’t think, around Christmas. He was someone who consistently picked me up, consistently told me the good things I was doing day in, day out (and) helped me get out of that funk and have a good rookie season.”

Notes: West Seneca’s Sean Malone is injured and won’t play in the tournament, Taylor said. The forward made his NHL debut with the Sabres on April 8. Taylor wouldn’t disclose the injury. … Bailey has switched from No. 56 to No. 95, the number he has worn most of his career. He was given 56 when he came up in 2015-16. He said a trainer recently asked which number he would choose if he could switch. Bailey found out about the new number when the team tweeted it.