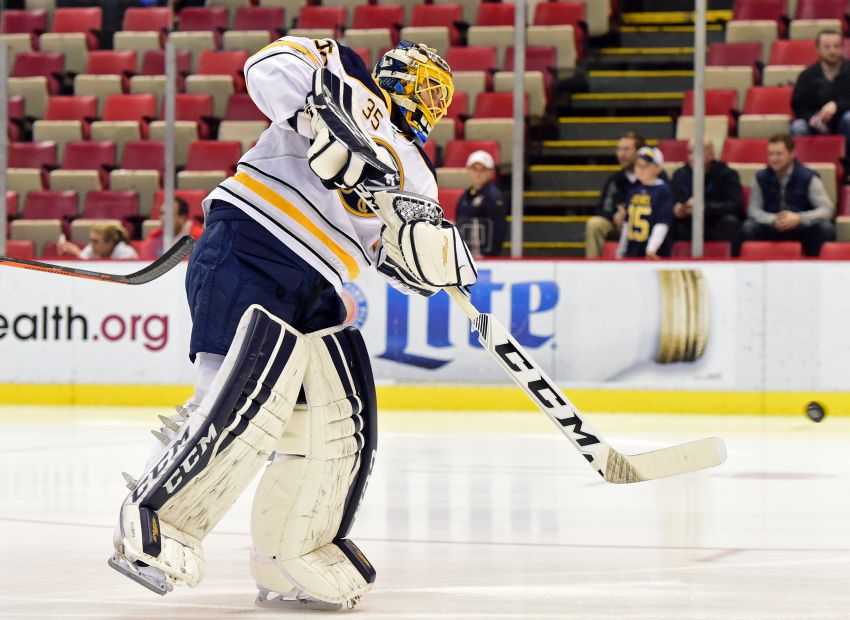 When a bruised finger prevented goalie Chad Johnson from playing April 9, the Sabres recalled the struggling Swede from the Americans hours before their season finale against the New York Islanders.

In his first NHL start since Jan. 12, Ullmark helped the Sabres win 4-3 in overtime. The victory, Ullmark’s only win at any level since March 16, was “huge,” he said.

“It was a terrific game in New York,” Ullmark said Thursday inside the Blue Cross War Memorial. “It helps you think that ‘OK, maybe I’m not so bad’ or something like that. So it helps your confidence come back and you know that, OK, I can win. It’s not a question about I can win in the NHL. I should be able to win in the AHL, and it helps you grow as a person.”

Ullmark, 22, believes he grew a lot in his first North American season.

In a whirlwind first three months, the 2012 sixth-round pick morphed from an unknown – he underwent surgery on both hips a year ago and missed training camp – into the Sabres’ best player some nights. But after returning to Rochester in mid-January, he struggled at times before beginning a slump he’ll carry into next season.

Ullmark’s season hit the skids after his last win 35 days ago, a 42-save performance against the Lehigh Valley Phantoms. In his final nine appearances, he compiled a ghastly .868 save percentage. In four April starts, he posted a wretched 4.29 goals-against average.

“We don’t know, because he came onto the scene real strong,” Amerks coach Randy Cunneyworth said.

After sighing and briefly pausing, Ullmark wouldn’t speculate why his game suddenly dipped.

The adversity has been difficult for the upbeat Ullmark, who loves to smile and talk positively, to handle. He possesses a calm, cool demeanor. A song from the 1994 movie “The Lion King” – “Hakuna Matata,” a Swahili phrase that means “no worries” – inspires him.

“Yeah, it’s been tough,” Ullmark said. “Looking back, (no worries), it’s all about that. There’s nothing you can worry about, and that’s the hard part. If you get into that mindset, you start worrying about stuff that happened before, it’s hard to focus on what’s important.”

While Ullmark enjoyed some NHL success, he understands he needs time to develop. He’ll almost certainly start next season with the Amerks, possibly as part of a tandem with newcomer Jason Kasdorf.

“Hockey’s such a complicated sport even though it’s so easy to understand,” Ullmark said. “So there’s a lot of things you have to work on every day and you just have to think about. No one gets fully learned. I’m still young. I’m not in a rush.”

Some fans were in a rush to anoint Ullmark the Sabres’ goalie of the future. He looked sharp early in the NHL, winning four of his first six starts. After cooling off, he won two straight road starts in January before No. 1 goalie Robin Lehner returned from a high ankle sprain.

Of course, the Amerks, who missed the playoffs, hardly supported him. In his last two starts, for example, Ullmark faced 84 shots.

“He’s had some highs where he’s been unbelievable for us and he’s gone through some spells where it hasn’t gone his way,” Amerks veteran Matt Ellis said. “The thing with him is he continues to battle and he does strive to get better. …

“It’s all part of the progression. He continues to grow. Sometimes you have to go through the struggles to see the light and become better at it.”