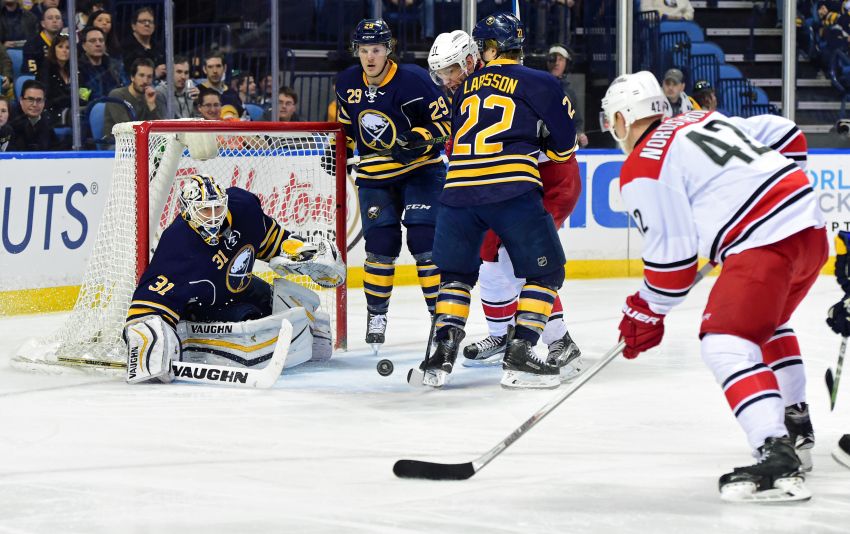 BUFFALO – Some of the faces familiar to Sabres goalie Chad Johnson are gone. Tim Murray, the general manager who originally acquired him, has been fired. So has Dan Bylsma, the coach who played him regularly two seasons ago.

Still, Johnson, who signed a one-year, $2.5 million contract to return after free agency opened today, feels a certain comfort in Buffalo and believes he has “unfinished business” to make the Sabres a playoff team.

By the end of that season, Johnson said fans started embracing him. He felt the campaign “was huge” in establishing himself “as an elite sort of 1B” goalie.

“I won a lot of games and had good numbers,” he said this afternoon on a conference call. “So I think being able to come back and be a part of the organization again and to have that drive to win and get back in the playoffs is special for me. I always felt like there was unfinished business.

“I see the organization going in the right direction. They’re committed to winning. That’s sort of what I want to be a part of.”

The changes, he said, are a “positive” and create opportunities. He knows new general manager Jason Botterill a bit from the Pittsburgh Penguins, who drafted him in 2006.

“A lot of players are still there in Buffalo that I know and have a lot of trust and respect for,” said Johnson, who spent last season with his hometown Calgary Flames. “I think looking at the roster and breaking different teams down going through this process, it made sense for me to be able to come back here.”

Johnson also returned to work with goalie coach Andrew Allen, someone he said “understands” his game and “took it to the next level.

“Having the relationship I have with Andrew was important in my decision,” he said.

Johnson said he left the Sabres a year ago for a better opportunity in Calgary. The Sabres were committed to Lehner as their starter. The Flames, meanwhile, didn’t have an established No. 1.

“It really came down to the best situation for me, really being able to come in and compete for playing time,” he said.

Botterill said the Sabres wanted Johnson back so goalie prospect Linus Ullmark can handle a heavy workload with the Rochester Americans again. The AHL All-Star played 55 games last season. Botterill recently worked out a side deal so the Vegas Golden Knights wouldn’t take the 23-year-old Swede in the NHL Expansion Draft.

“He could probably handle the backup role in the National Hockey League this upcoming year,” Botterill said. “But it’s also as a young goalie, I’m a big believer he needs to be playing.”

Notes: Wheatfield’s Adam Clendening signed a one-way, one-year deal worth $650,000 with the Arizona Coyotes on Saturday. The Coyotes are the defenseman’s seventh NHL organization. … The Calgary Flames traded Sanborn’s Tom McCollum back to the Detroit Red Wings for a conditional seventh-round pick in 2018 on Saturday. The goalie began his career with Detroit. … Goalie Cal Petersen, a former Sabres prospect, officially signed his entry-level contract with the Los Angeles Kings on Saturday.