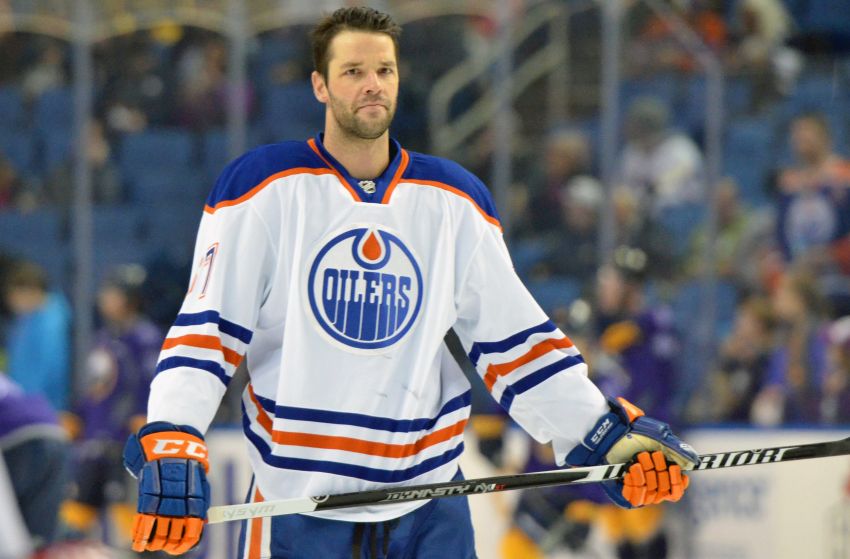 Bringing back 38-year-old captain Brian Gionta is still a possibility, general manager Jason Botterill said Saturday after the market opened. And while Botterill said he feels comfortable with the Sabres’ overall toughness, acquiring more muscle could be a priority.

But after inking goalie Chad Johnson and winger Benoit Pouliot on Saturday, a day after the Sabres obtained defenseman Marco Scandella and winger Jason Pominville from the Minnesota Wild, a clearer picture of the 2017-18 team has emerged.

“It’s a good situation here,” Botterill, who was hired May 11, said Saturday on a conference call. “It’s been a good week for our organization.”

Johnson’s return after a season with the Calgary Flames offers the Sabres a sturdy backup capable of starting. Pouliot gives them a veteran left winger – they needed one after after dealing Tyler Ennis and Marcus Foligno – with a lot to prove.

Botterill has addressed the blue line with three notable additions in recent weeks, including Scandella, the puck-mover the Sabres sorely needed.

“We are very happy with what we accomplished on the back end,” Botterill said.

Botterill, like most GMs, seems open to a deal that would add scoring or help them get quicker up front. But it’s likely the roster come Oct. 5, opening night, will look quite similar to today’s.

As Botterill hinted Friday, the Sabres stayed away from the “big bang” in free agency. He denied an NHL Network report the Sabres made a seven-year offer to defenseman Kevin Shattenkirk, who ultimately signed a four-year, $26.2 million deal with the New York Rangers.

“That’s certainly not the case,” he said of the report. “We never put a seven-year contract on the table. We had some good conversations with the Shattenkirk camp. It was a situation where with we got Scandella in a trade we felt we had shored up our defense. That really was not our priority.”

It remains to be seen if Gionta is truly a priority or if Botterill just being respectful to the veteran.

Botterill said he has discussed the roster’s toughness. Parting with Foligno was difficult because of his grittiness.

“I’m a big believer in trying to have a team toughness mentality out there,” Botterill said. “We have players such as Evander Kane, (Rasmus) Ristolainen, (Zach) Bogosian, (Marco) Scandella who … can certainly finish checks and play a very physical game out there.”

Saturday’s other notable addition, the 6-foot-3, 204-pound Pouliot, was waived by the Edmonton Oilers on Thursday so they could buy out the final two seasons of his five-year, $20 million contract. The 30-year-old signed a one-year, $1.15 million deal with the Sabres.

Pouliot endured a miserable 2016-17 season, mustering only eight goals and 14 points in 67 games, career-low offensive totals for a full season.

“I’m hoping to get a good look in Buffalo and a fresh start,” Pouliot said on a conference call. “I’m going to be 31 years old. I’m not 23, 24 anymore. So I think I’m just looking for the best opportunity for me to extend my career.”

The rest of Saturday’s signings:

– Defenseman Matt Tennyson signed a two-year contract with a two-way deal next season and a one-way deal in 2018-19.

The 31-year-old played 43 games for the Sabres from 2012 to 2014 and also captained Rochester. He spent the last two seasons shuttling between the Pittsburgh Penguins and Wilkes-Barre, their AHL affiliate, a team Botterill ran.

The 25-year-old Criscuolo had 17 goals and 41 points in 76 AHL games last season with the Calder-Cup winning Grand Rapids Griffins.

The Sabres also lost some players:

– Defenseman Dmitry Kulikov, a colossal disappointment last season as he battled a lower-back bruise, signed a three-year deal with the Winnipeg Jets worth $12.99 million, according to TSN’s Darren Dreger.

– Backup goalie Anders Nilsson signed a two-year with the Vancouver Canucks worth $5 million, according to TSN’s Pierre LeBrun.

One thought on “GM Jason Botterill happy with Sabres: ‘It’s been a good week’”