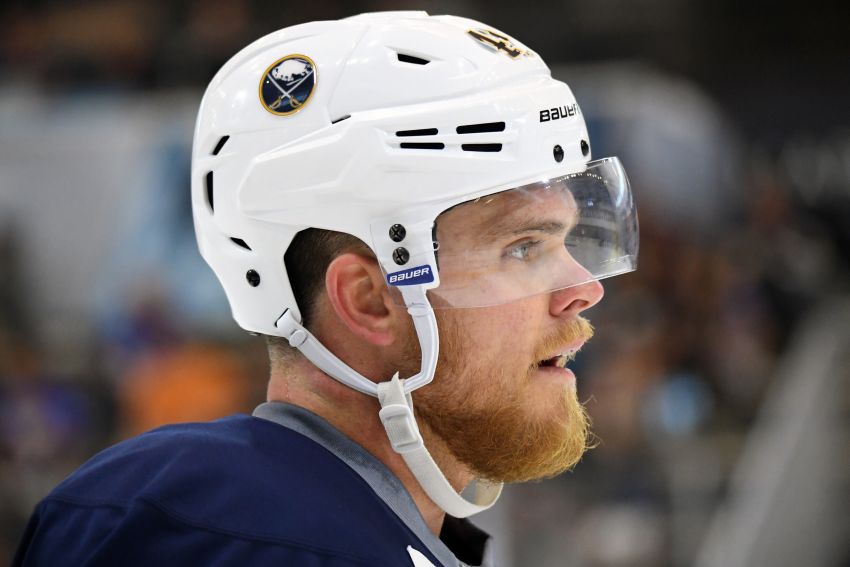 BUFFALO – Sabres winger Conor Sheary, a newcomer expected to skate on a top line, is week-to-week after suffering an upper-body injury during Friday’s practice.

“In the first day (of training camp), he took a hit the wrong way, and we’re just making sure we’re on top of that,” said Sabres coach Phil Housley, who is dealing with three notable injuries just five days into camp.

Meanwhile, depth defenseman Matt Hunwick is out indefinitely with a neck injury. On Friday, the Sabres announced Hunwick would miss the beginning of camp because of an upper-body injury. Housley wouldn’t reveal when Hunwick was hurt.

Malone, 23, was enjoying a strong camp and making a push to earn a spot on the fourth line. The West Seneca native got tangled in front of the bench late in the second period and the left the game against the Blue Jackets.

Sheary, of course, is expected to play significant minutes and score perhaps 20 or more goals.

“It’s disappointing (for) any player that has a really strong chance at making our team being able to contribute,” Housley said. “I feel back for him because it’s a new player coming to a new team. You want to set a good impression. It’s just unfortunate.”

Malone has battled hip injuries over the last few years. A year ago, he missed of all training camp with an undisclosed injury.

“It’s been tough, really,” Housley said. “He’s been battling a lot of injuries the last couple years, especially with his upper body. Just a fluke thing for him, and it’s disappointing, because I thought every day was getting better, and certainly in the game he was bringing speed and tenacity.”

Housley also said defenseman Zach Bogosian, who underwent season-ending hip surgery during the winter, is day-to-day and will probably skate Wednesday. The Sabres have held the veteran off the ice three straight days.

“We’re just trying to monitor that, stay ahead of it,” Housley said.

“Of course, (I’m) going to be nervous,” the first overall pick said. “But when you make the first pass, it’s gone.”

The Sabres will dress most of their top players tonight against Pittsburgh’s junior varsity lineup at KeyBank Center. The Penguins left most of their stars, including centers Sidney Crosby and Evgeni Malkin, at home. Their most notable player is probably winger Jake Guentzel.

Newcomer Carter Hutton will start in goal and be backed up by Scott Wedgewood.

What does Housley want to see from Dahlin?

“Just keep the game simple and let his instincts take over,” Housley said. “Obviously, it’s going to be exciting for him. He’s going to have nerves, he’s going to have anxiety, so just play his game. He’s got very good poise with the puck.

“The thing I’m looking for is just his defensive reads, his gaps, really good stick detail. I think once he settles in, you get those first two shifts under your belt, he’ll feel comfortable.”

The Sabres’ No. 1 power play will feature Dahlin and Eichel manning points with Okposo, Skinner and Pominville up front.