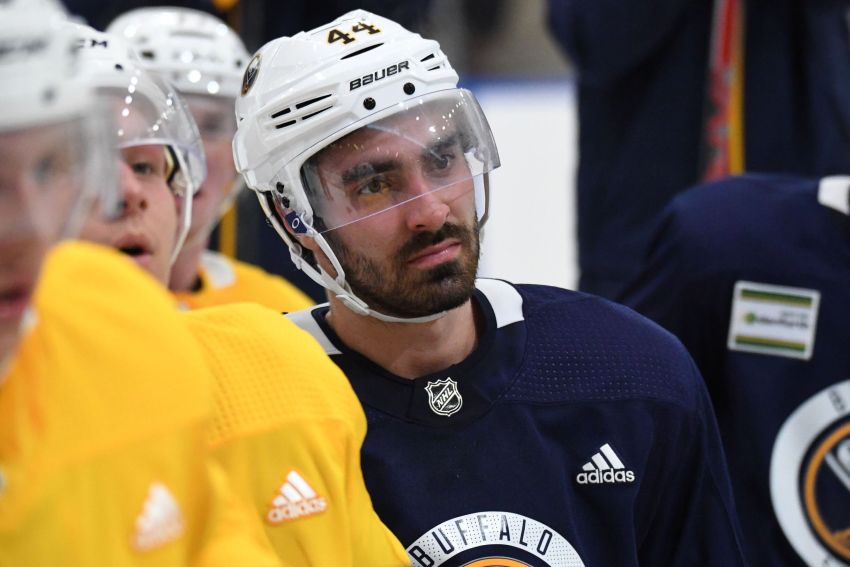 BUFFALO – When Sabres defenseman Brandon Hickey received word he would be playing in tonight’s preseason opener, he said a “whole bunch of anxious energy” started running through his body.

“It’s my first taste of pro hockey,” Hickey said this morning. “I’ve been looking forward to this my whole life. I’m pretty excited to get things going tonight.”

Hickey, 22, is a bit old for a rookie. Despite being picked by the Calgary Flames in the third round, 64th overall in 2014, he stayed at Boston University four seasons.

So Hickey, who was acquired from the Arizona Coyotes on June 14, is more of a finished product than other youngsters. It makes him an intriguing prospect.

Hickey was so highly regarded he earned a coveted spot on Team Canada’s World Junior team in 2016. Given the Sabres’ defense depth, he will likely start the season with the Rochester Americans.

Still, Hickey refuses to believe he’s ticketed for the AHL.

“I’m here to make the team,” he said. “I want to play in the NHL, and I’m doing everything I can, every single day to get there. A lot of people have already penciled me (for) Rochester, but I don’t really listen to that stuff. I’m here to do my thing and show everyone who I am and eventually earn my spot here.”

Hickey signed with the Sabres shortly after the trade. If he wanted, he could’ve waited until mid-August and opted for free agency.

But right away, Hickey felt comfortable in Buffalo. The Sabres have three other BU products.

“Along with all the familiar faces, people I know through the hockey world that are here, really made things a lot easier, added an element of comfort for me and made me really excited for the opportunity I have here,” he said. “That’s something that drew me to here.”

Since it’s the first preseason contest, tonight’s lineup in Columbus against the Blue Jackets features plenty of youngsters.

The following players skated in the game group this morning inside KeyBank Center:

The Sabres host the Pittsburgh Penguins on Tuesday, so defenseman Rasmus Dahlin, the first overall pick, could make his exhibition debut then.

The Sabres will fly to Columbus this afternoon.