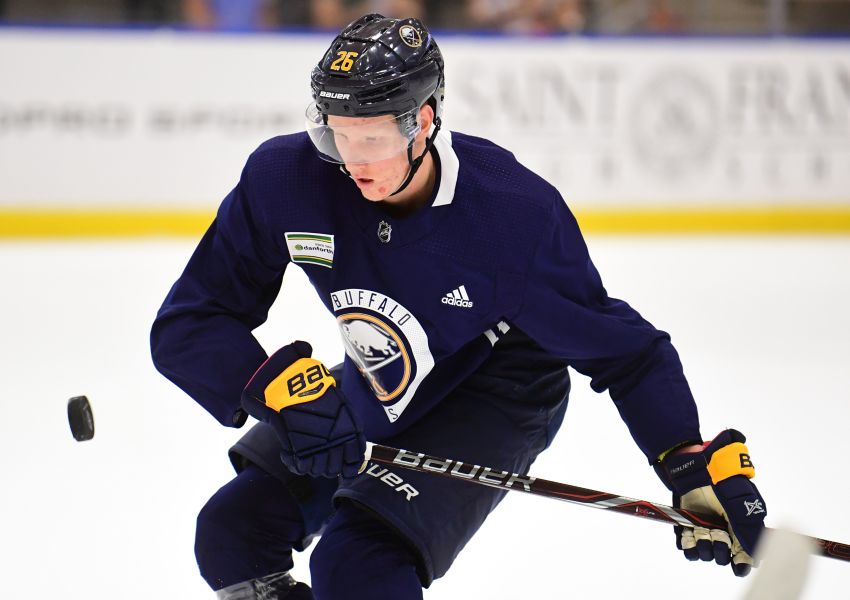 But on Tuesday, before the first overall pick’s NHL exhibition debut, he said he started feeling some nerves.

Then Dahlin, 18, made his first pass, and his first-game jitters disappeared.

“Then I felt comfortable out there,” the defenseman said following the Sabres’ 3-2 win against the Pittsburgh Penguins’ junior varsity squad mostly comprised of AHL players.

Dahlin looked comfortable most of the night, skating 21 minutes, 32 seconds over 25 shifts, mostly beside partner Jake McCabe. Dahlin also played on the power play, manning a point beside Jack Eichel, and killed penalties. At one point, Dahlin juked Dominik Simon with a nifty move few players could pull off.

“I think I could sense the nerves, a little anxiety finally getting to play in the first exhibition game in the NHL,” Sabres coach Phil Housley said. “You could see he was calm, but I thought he needed a little bit more urgency in the first period of just getting the pucks up ice. He got stripped a couple times. Certainly, he created a lot of stuff for us, finding open people.

“The one thing I like, every shot he takes, it seems to hit the net. His development’s where it needs to be right now.”

So is the Sabres’ aggressiveness.

Perhaps watching Dahlin has forced the Sabres’ other defensemen to start moving into the play. More likely, however, it’s just the team having a firmer grasp of Housley’s system in his second year.

On Tuesday, the Sabres’ blue line was much more active than last season, showcasing the attack Housley wants to utilize.

In the second period, for example, McCabe, who has 10 goals in 215 NHL outings, scored in the crease, knocking home Evan Rodrigues’ shot.

“I don’t when the first time our defensemen got a goal, now we got back-to-back goals with defense contributing,” Housley said. “That’s part of our five-man cycle game we talked about and we’ve worked on in camp. Jake’s goal was a direct result of that. …

“Who would’ve thought a defenseman would be right in front of the net? But I like it, it’s great.”

The Sabres announced a crowd of 15,602 inside KeyBank Center. The Penguins left most of their big names, including superstar centers Sidney Crosby and Evgeni Malkin, at home.