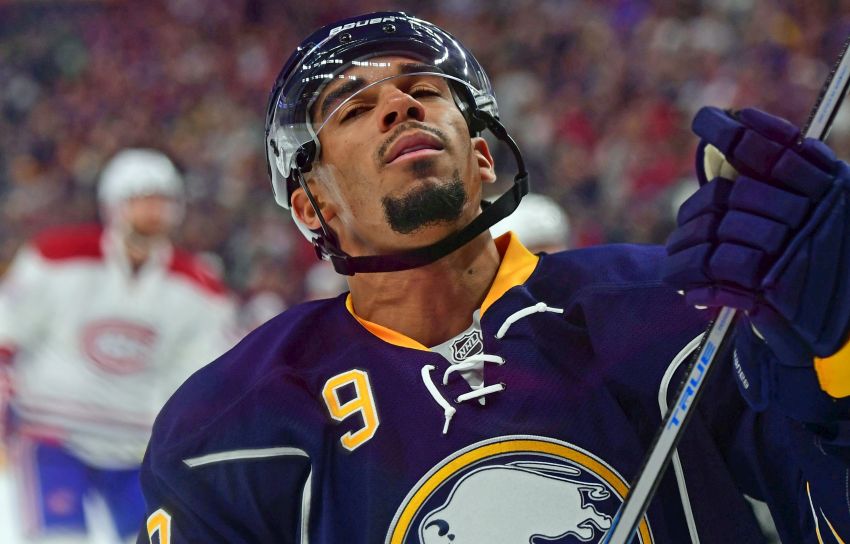 BUFFALO – The injury-plagued Sabres, already down four top players just one game into the season, will be without winger Evander Kane for “weeks” after he broke three ribs crashing hard into the end boards Thursday, coach Dan Bylsma said.

Kane slid on his back following contact from Alexei Emelin late in the second period of the Sabres’ 4-1 loss to Montreal, his left side taking most of the impact. He was transported to the hospital and released shortly after the season opener, Bylsma said.

There’s some good news for the Sabres, however. Okposo, who signed a seven-year, $42 million contract July 1, practiced fully Friday and could play Sunday in Edmonton.

Naturally, Okposo, who said his knee ballooned to “about the size of a beach ball” as it filled with fluid, wanted to make his Sabres debut Thursday.

“You have to kind of calm your mind down and just remember it’s a long season,” he said.

Okposo recently had difficulty just walking. He said the puck hit directly on his bone.

“It was tough,” he said. “Having the conversation about playing, not playing, it was one of the toughest ones I’ve had.”

Bylsma said the Sabres will make at least one recall from Rochester following the Americans’ opener Friday. They could summon a forward and a defenseman.

Update: The Sabres have recalled winger Nick Baptiste, 21, from the Amerks. The 2013 third-round pick has never played an NHL game. He had a goal and two points in Rochester’s 5-4 opening night win over Hershey. Baptiste also enjoyed a notable NHL training camp.

Baptiste had 13 goals and 28 points as an AHL rookie last season.

“It’s malicious,” Bylsma said. “It’s a slew-foot. There’s three seconds on the clock. … They’re not engaged. I was hoping it would be reviewed.”

According to TVA, Shaw will have an “educational meeting” with one of the NHL’s disciplinarians next week to make sure “he’s not crossing the line again.”