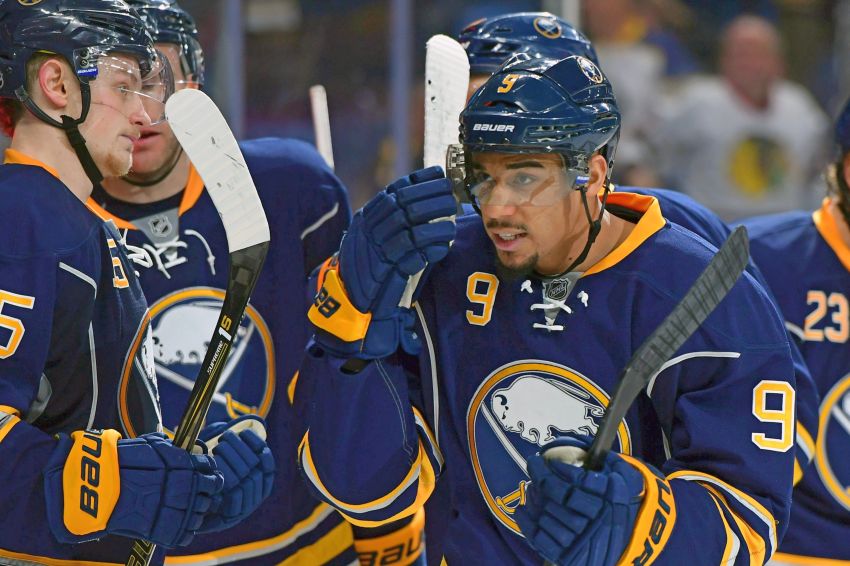 BUFFALO – Looking back, Sabres winger Evander Kane acknowledges that, yes, he probably rushed back to the lineup after breaking four ribs opening night.

Following an 11-game absence over three weeks, Kane returned and generated almost nothing. Seven weeks ago, he was one of the NHL’s biggest disappointments, still goalless in 12 appearances as the calendar turned to December.

But these days, Kane is scorching, having scored 12 times in the last 21 games entering tonight’s tilt against the Detroit Red Wings at KeyBank Center.

Since getting his first Dec. 3, Kane, 25, is tied for third in the NHL in goals over that span. A team-high 11 scores have come at even strength.

“I felt I could play and was able to,” Kane said Thursday about returning so quickly. “I think it just took me a little longer to get back to feeling 100 percent confident with my body and kind of get back in the groove of things a little bit.”

The eight-year veteran found that groove without the benefit of consistent action beside top centers Jack Eichel and Ryan O’Reilly. Sabres coach Dan Bylsma usually plays Kane on the third line and the second power-play unit.

That means Zemgus Girgensons, Johan Larsson and Sam Reinhart have all pivoted Kane recently. He played with Girgensons and captain Brian Gionta in Tuesday’s 4-3 loss in Toronto, scoring Buffalo’s second goal on a one-timer.

“I guess I’ve been a bit of a rover for Dan,” Kane said. “I guess I just kind of come to the rink and see where I am in the lineup and try to make the most of that opportunity.”

So does Kane care who he plays with?

“Of course you do,” he said. “But at the end of the day, it’s not your decision. I just come with the attitude, whoever the coach puts you with, that’s what I’m getting. You want to make the most of that opportunity. Maybe if I got some more, I’d be able to do more.”

Is Kane, who averages 18 minutes, 42 seconds of ice time a game, saying he wants to play more?

“It’s not more ice time, different things,” he said. “It’s all about the opportunity you get. I think I’ve been doing a pretty good job of making the most of it. I think I feel I can do more.”

“With Zemgus now and when it was Lars earlier, it’s a good hockey line,” Bylsma said. “That’s where he’s gotten a lot of his scoring from. He gets opportunities to play with different guys at different times, depending on the game and the situation.”

Kane scored 20 goals in 65 games last season, his first with the Sabres. His penchant for shooting the puck – he often lets it loose from anywhere in the zone – is well-known.

But Kane has started getting inside more frequently this season. Not surprisingly, a chunk of his goals have come around the net.

“You see where he’s effective and a good hockey player with his speed shooting the puck,” Bylsma said. “But I think he’s equaled his total number of goals that he got last year on the inside.”

Kane’s shooting percentage is 11.8 percent, up from 7.4 percent a year ago.

“You got to try to be multi-faceted with how you score,” Kane said.

It was difficult to score any kind of goal coming off the broken ribs.

“It was weird … I could play, 100 percent,” Kane said. “I’m not making any excuses about that. But I think it’s more of a mental thing, too. Coming off of an injury like that, you’re going to be sore no matter what. … It took some time to get back into the rhythm of things, especially when the puck’s not going in the net for you right away, that makes it a little bit more difficult.

“I think after I got the first one out of the way, I started feeling better.”