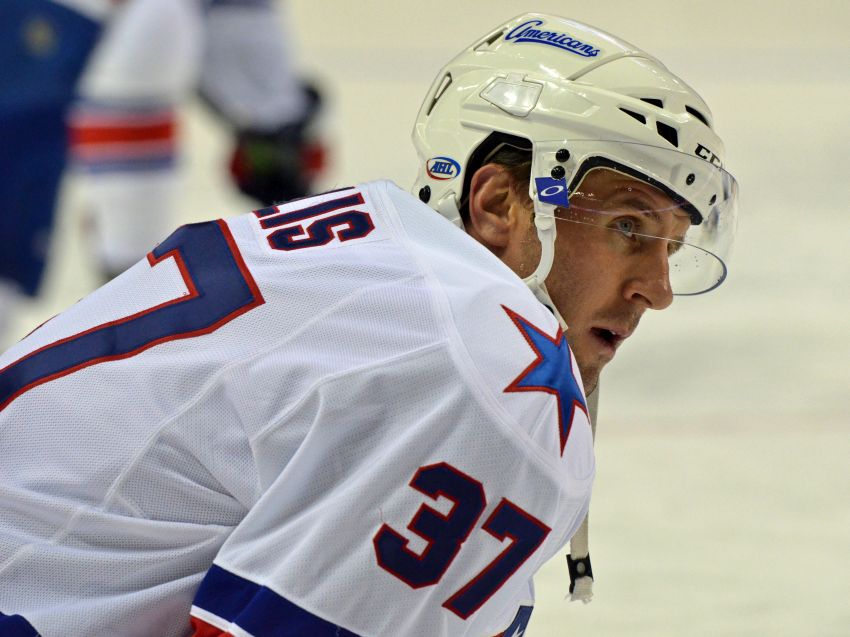 Matt Ellis will have options if he retires. ©2016, Dan Hickling, Olean Times Herald

“I definitely feel like I got lots left in the tank,” Ellis said Thursday inside the Blue Cross War Memorial.

Still, Ellis understands he could be nearing retirement. This season, his first out of the NHL in 10 years, he played only 56 times with the Americans. When the AHL veteran rule didn’t limit his appearances, he often skated sparingly on the fourth line.

With more time on his hands, Ellis said he began thinking “about every possible role you can think of outside of playing.”

Now that the season has ended, Ellis plans to “take a deep breath for a couple of weeks and see what my options are.”

Ellis, of course, has thought about coaching. Given his background – he played 356 NHL games after going undrafted and starting in the ECHL – and strong people skills, he would seem to be a natural.

The Sabres have kept re-signing him, in part, because he’s such a good mentor and role model for their youngsters.

“Definitely that’s something I’d like to visit in the future,” Ellis said about coaching. “I think I have the tools and the skillset where I could get into coaching and do a good job.”

This season was different for Ellis, who joined the Sabres on waivers prior to the 2008-09 campaign. While he played in the minors at least a portion for five of his seven seasons in Buffalo, he always returned and earned regular duty.

But Ellis signed a one-year AHL contract in July, meaning he knew he would stay put in Rochester all season. He hadn’t spent a full campaign in the minors since 2005-06 with the Grand Rapids Griffins.

“It was different in a sense you’re not chasing it, for lack of better terms,” Ellis said about the NHL dream. “It’s not to say that it could never happen. An AHL deal can always be turned into an NHL deal. I guess it came with the realization that you probably are going to be in the minors for the year.

“You kind of settle in and jump in with both feet, whether that’s through play or being a leader, you make this home.”

Ellis jumped in right away, scoring a hat trick opening night. He only, however, scored three more goals the rest of what he called “an up-and-down year.” With too many veterans – AHL teams can only dress six with 260 more games of pro experience – Ellis was scratched consistently until mid-March.

At times, Ellis said, playing so sporadically made it tough to feel engaged daily.

“I still think I’m good enough I can contribute,” Ellis said. “It wasn’t always easy. At the end of the day, I still understood what my role was, what I needed to be, and I don’t think I ever wavered from that – whether it was practice, those nights that I was in.

“From a leadership standpoint or being good with the young guys, those things are part of my fabric, never went away.”

“Those are the moments that you kind of live for at this stage,” Ellis said.

When Bailey, a Williamsville native, was summoned to Buffalo in February, he texted Ellis to thank him for his guidance.

“You take a lot of value in that,” Ellis said. “In talks before, I understand that part of my value is hoping to rub off on these kids, showing them to be good pros, good people. It’s moments like that that make it worth it.”

Ellis said he hasn’t ruled out anything for next season, not even moving to play somewhere else. He has always commuted from his Clarence home to Rochester.

“Should he decide to continue, there should be lots of teams interested,” Amerks coach Randy Cunneyworth said. “I would assume we would be as well. I can’t say enough about his professionalism, his character.”