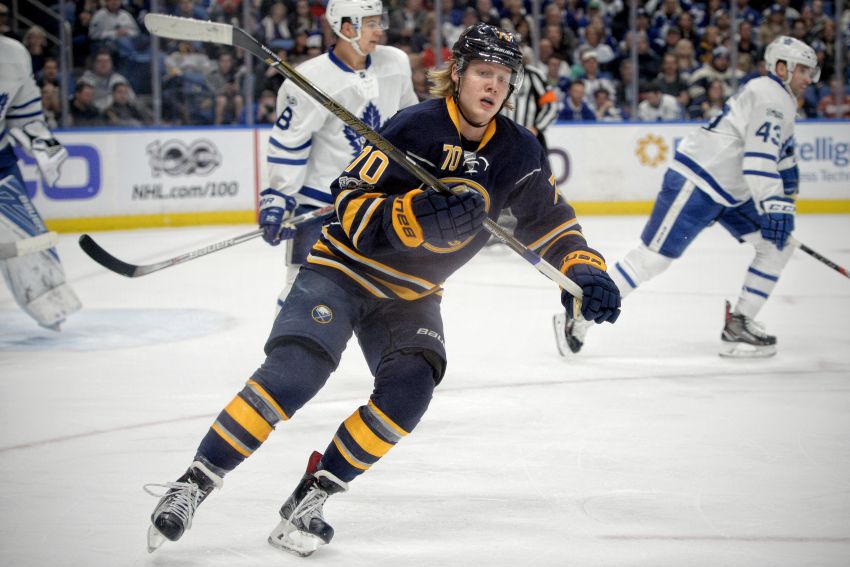 Alexander Nylander has turned around his season. ©2018, Micheline Veluvolu

“It was tough coming back from an injury, but I feel a lot better now, more confident with the puck and stuff like that,” said Nylander, who played four NHL games late last season. “I need to … bring what I did down there.”

The Sabres, who will clinch 31st place if they lose in regulation tonight, recalled Nylander on Tuesday.

“He had a tough start to his season, getting injured, and he got off to slow start,” Sabres coach Phil Housley said. “I think he’s played really well in the last 20 games, I think he’s got eight points in his last eight games, it’s one of the reasons he got rewarded to come up here.

“I just want to see him (do) what he’s done in Rochester recently. I think he’s gone to the hard areas, he’s going to the net much harder and using his skill.”

As Housley said, physicality has helped buoy the 6-foot-1, 192-pound Nylander. The youngster has been occupying the front of the net during power plays in Rochester, a place Housley plans to put him tonight.

“We’re going to try to get him there and in different areas on our power play and see what he can do in those positions,” Housley said. “I like … he was going harder to the net. He was paying a price to score goals. That’s good to see.”

The line, of course, possesses lots of skill.

“I just want them to go play and get a feel for the NHL game and try some stuff, try to make some plays,” Okposo said. “I’ll try to cover up when I can for these guys and just play hard. I think that’s the biggest thing, as long as we’re working … their skill’s going to come out.”

“He can make plays all over the ice,” said Mittelstadt, who made his NHL debut last week. “He’s obviously especially good in the offensive zone. Anytime you get to play with a guy like that it’s definitely exciting.”

The Sabres will close the home portion of a season widely regarded as the worst franchise history. Incredibly, they’ve won only 11 games at KeyBank Center.

This morning, Housley thanked the fans for their support.

“I know it’s been a tough year for them,” he said. “Nobody envisioned us being this poor at home, but I just wanted to reach out to them. I know they realize you got to remain patient and they’re looking for results. So in that respect, I’d like to thank them for their support that they’ve given us this year.”

In other news, Sabres winger Zemgus Girgensons underwent facial surgery today and is out for the season, Housley said.