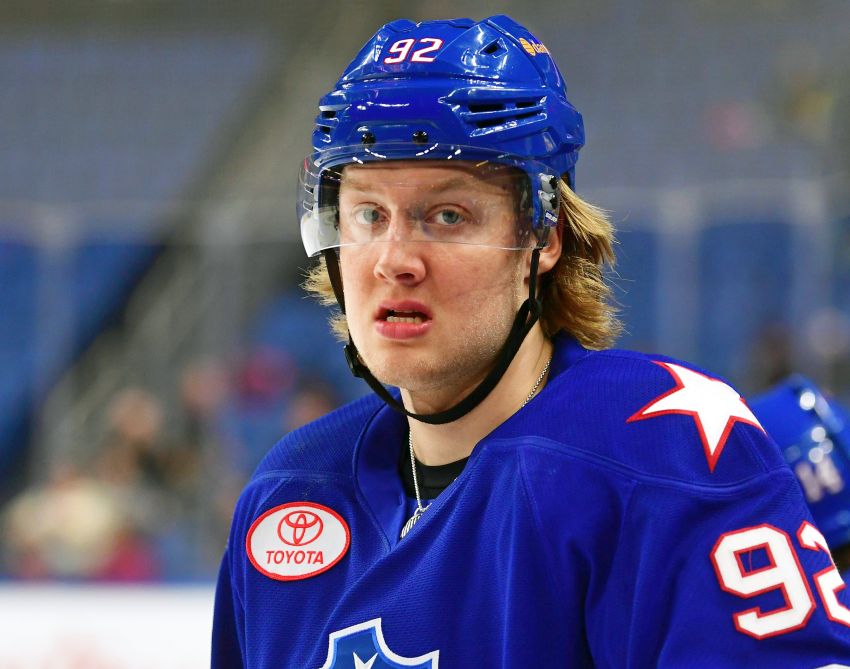 BUFFALO – Chris Taylor prefaced his comments with a reminder Sabres prospect Alexander Nylander is still a teenager, one of the AHL’s youngest players, and coming off a lower-body injury that cost him all of training camp and six weeks of the season.

“We always forget how young he is and he went through a major injury this year, too,” the Rochester Americans coach said prior to Wednesday’s 2-1 loss to the Syracuse Crunch inside KeyBank Center. “He didn’t skate, I think, for almost like three months, and it’s tough to come back, get your timing and getting everything done. He worked hard this summer.”

Right now, like a lot of Amerks, Nylander is struggling. Other than a two-goal, four-point effort in a recent 12-3 walloping of the Wilkes-Barre/Scranton Penguins, the Swedish winger has mustered zero goals and three assists in his last 18 outings.

Nylander, the eighth overall pick in 2016, had compiled four goals and 13 points in 32 games this season entering Friday’s home tilt against the Toronto Marlies.

So half of his goals and nearly one-third of his points came in one game.

The Sabres sent Nylander, who turns 20 years old on March 2, to Team Sweden for the World Junior Championship Buffalo hosted in December. The tournament, Taylor said, “was good for him.”

“Especially when we were winning regularly, he came back in our lineup and added a different spark to it, and then he kind faltered a little bit,” said Taylor, whose Amerks had won only two of their last last 15 games entering Friday. “But he’s young, he’s learning, he’s learning how to play hard every night, every shift.”

“He’s learning that,” he said. “I’m demanding on him because I know he’s got a lot more and I want more from him and I think that’ll bring the best out of him, too. We can’t lay off him. I think he’s the type of guy, he can be a game-changer. That’s what we want. We don’t want him just to fit in on our team; we want him to be a game-changer on our team.

“That’s what I look at for every guy, especially with a guy like that with his talent, he’s getting better every day.”

The Sabres’ old regime, which drafted Nylander, promoted him for four late-season games a year ago. An appearance with the big club seems unlikely this year, however.