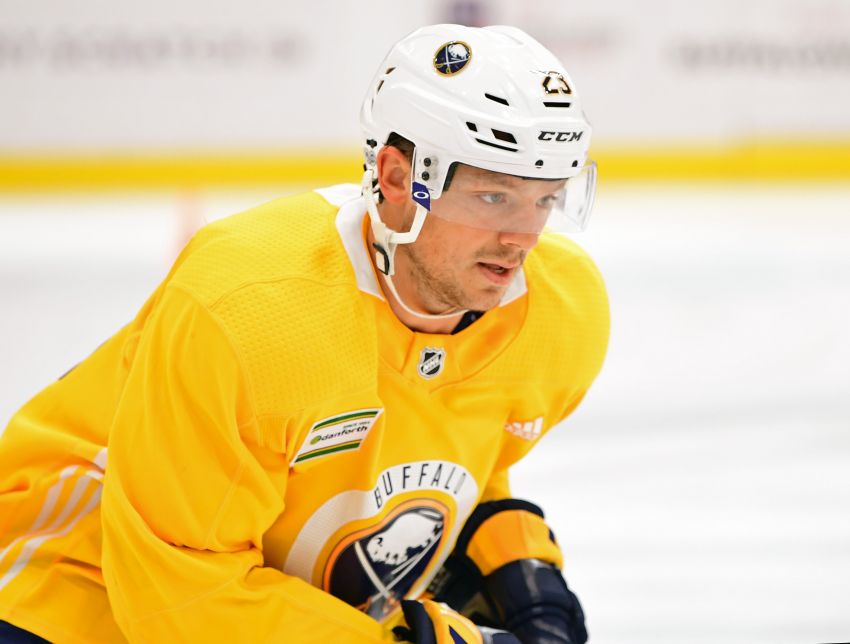 BUFFALO – Sam Reinhart’s gig at right wing never felt permanent. Sure, the youngster often thrived during his two seasons playing the position, scoring 40 goals and 90 points while developing into one of the Sabres’ top threats.

But the Sabres drafted Reinhart, 21, second overall in 2014 as a center, a glamour position. Centers are a precious commodity.

So the Sabres have a good problem. Jack Eichel and Ryan O’Reilly are entrenched in the middle. The team’s old regime wanted Reinhart to play on the top two lines, so converting him to a winger was the easiest move.

Even as he scored 23 goals as a rookie two seasons ago, former coach Dan Bylsma said he envisioned Reinhart’s future at center.

Fast forward to today, and Reinhart is the Sabres’ No. 3 center. New coach Phil Housley isn’t worried about Reinhart’s minutes, which will likely dip if he stays at his natural position.

Basically, if you have a center as talented as Reinhart you drafted that high, you eventually need to play him there.

“He plays (the) power play, he’s going to get those minutes,” Housley said Sunday inside HarborCenter. “I … know the minutes will be spread out differently, and at times maybe he will play wing.

For two seasons, Reinhart occasionally played center when he was slumping or the Sabres had injuries. From the get-go this year, however, it appeared he would stay in the middle. Housley put him there for the duration of training camp.

“It elevates my game, it forces me to move,” Reinhart said of playing center.

Naturally, Reinhart spent the preseason acclimating to the position.

“I started off well with it, there was a lull right in the middle,” he said. “I worked on some video, talked to the coaches a little bit. They’ve really helped work around that lull and get better at it. I’ve felt very comfortable the last two games at it.”

How did the coaches help Reinhart?

“They switched my approach and mentality a little bit about how to pick up speed coming back into my own end and reading the play a little bit earlier,” he said.

Following a strong rookie season – in a year without a slew of talented freshmen, he likely would’ve received strong Calder Trophy consideration – Reinhart scored 17 goals while upping his assist total to 30, 11 more than his first campaign.

Still, despite some solid numbers, Reinhart struggled at times as the Sabres finished last in the Atlantic Division. He didn’t score until the seventh game. At one point, he scored one even-strength goal in a 39-game stretch. He scored nine power-play goals.

Not surprisingly, general manager Jason Botterill has said the Sabres won’t negotiate a new contract with Reinhart, who has one year left on his entry-level deal, until after the current season.

Reinhart said the long summer – he had no hockey commitments for the first time since he was 15 – helped him reflect on his first two seasons and focus.

“I’ve been able to learn a lot, to train a lot … smarter than I ever have,” he said.

While it was hard to number lines at times in camp, on Tuesday Reinhart pivoted Zemgus Girgensons and Seth Griffith. That’s clearly the third trio. Without Eichel and O’Reilly’s dynamic skills next to him, Reinhart’s own talents must drive his line.

“I’m going to let my play do the talking and earn my own opportunity that’s given to me, and if that opportunity’s at center, then great,” Reinhart said. “I’m going to work with it, I’m going to roll with it and hopefully succeed with it.”

One thought on “Moving Sam Reinhart to center inevitable for Sabres”