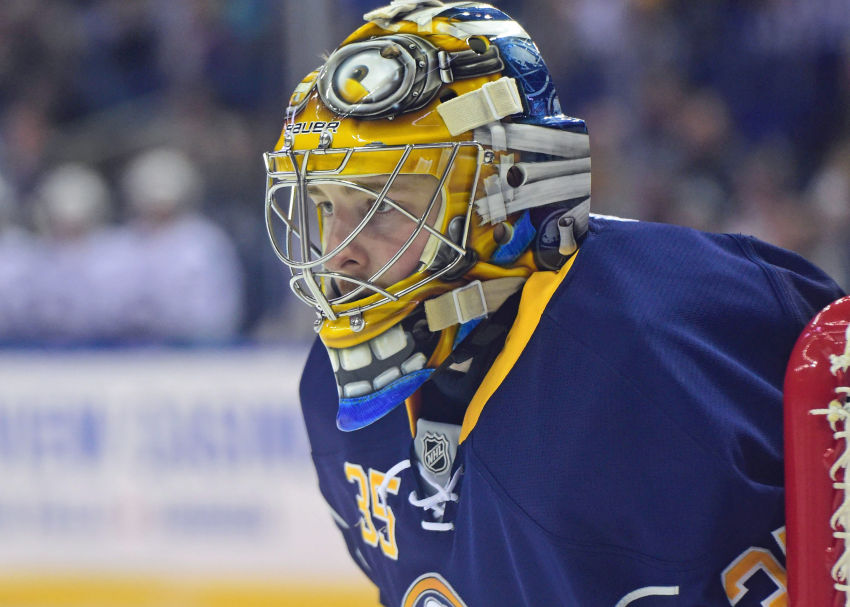 “I knew it was offside before the puck went in,” Bylsma said about the goal 13:53 into the third period following the Sabres’ 3-1 loss to the Dallas Stars inside the First Niagara Center.

For the third time in 18 games this season, an offside call reversed a Sabres goal. For the second time, it negated a late two-goal comeback at home. An Evander Kane goal was wiped out opening night.

Reinhart’s score from the left circle was taken back following a quick review. Seconds earlier, before Tyler Ennis set up a screen for Reinhart in front of Stars goalie Antti Niemi, he went offside entering the Dallas zone.

“It cost us the game,” said a visibly frustrated Ennis.

Incredibly, Ennis also had his own goal reversed when he went offside in Thursday’s 3-2 win in Florida.

What does he think about the rule?

“My opinion hasn’t changed in (five) days,” Ennis said. “It’s in place. Offside has been around a long time. So I got to get to know that rule a little better.”

Despite being burned by it, Bylsma’s OK with the coach’s challenge reviews, something the NHL added this season.

“It hurts not to get the goals that we’ve put in the back of the net, but it’s the right call,” he said. “I like that the fact that we’re getting it right. It goes against you. There’s probably another three times or four times in the game where we say, ‘That’s offside, check it,’ and if it goes in our net, we get it back.”

Still, the Sabres, who ignited the crowd when Ryan O’Reilly’s power-play goal made it 2-1 at 13:03, had time left on the man advantage but couldn’t convert.

With Sabres goalie Linus Ullmark on the bench, Tyler Seguin’s goal sealed at 18:33.

After winning three consecutive games to climb to .500 on Thursday for the first time in almost three years, the Sabres have lost two straight while scoring only two goals.

In both losses, the Sabres fell behind early. On Tuesday, Valeri Nichushkin scored 51 second in. In Saturday’s 2-1 overtime loss to San Jose, the Sharks scored at 1:48.

“I think the start’s a big thing for us,” said O’Reilly, who has both Sabres goals. “Again, we didn’t come out, engage. We didn’t do it physically, mentally, commit to winning the blue line, getting pucks deep.”

When Jason Spezza made it 2-0 13:03 into the third period, the Sabres appeared finished.

The Sabres finally got going when Stars captain Jamie Benn cross-checked Josh Gorges in the face and O’Reilly scored.

“They grabbed a little sniff of wind there when we took a penalty, and it’s a penalty we don’t need to take and it almost cost us,” said former Sabres coach Lindy Ruff, whose Stars have won six of the last seven games. “But you’ve got to give them credit. Their power play’s been going good, they sensed an opportunity to get back in it and they damn near did.”

Meanwhile, Sabres defenseman Zach Bogosian, out since suffering a lower-body injury three days into training camp, made his season debut, skating 21 minutes, three seconds in his first game since April 11.

“We know we’d see a good-skating defenseman and a big body back there,” Bylsma said. “He was a factor all over the ice.”