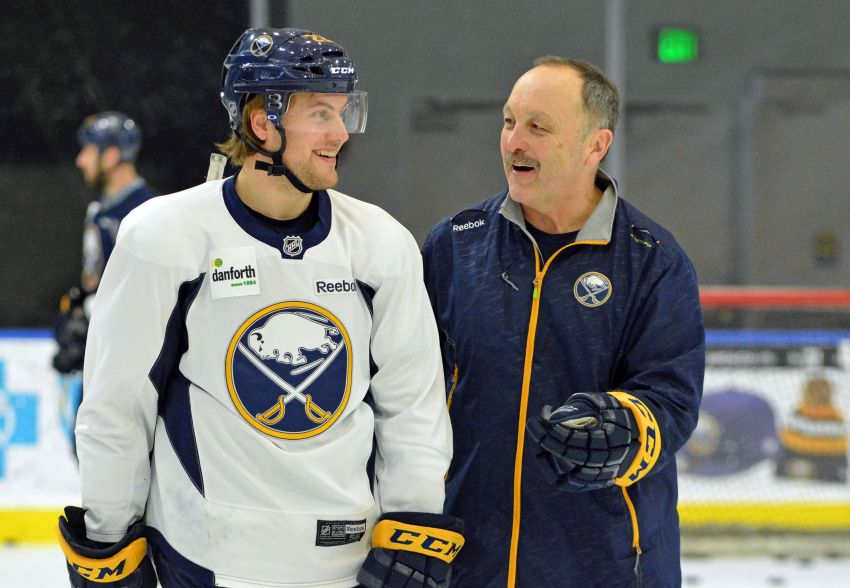 TORONTO – Johan Larsson’s new assignment really hit him when he lined up for a faceoff Saturday against Washington Capitals star Nicklas Backstrom, the NHL’s best playmaker and a fellow Swede.

Larsson, the Buffalo Sabres’ new No. 1 center, has only three goals and 11 points in 53 NHL games. After scoring a goal and two assists in Wednesday’s 4-3 shootout loss to the Maple Leafs – his first-ever three-point outing – the 22-year-old has seven points this season.

Backstrom, a former 101-point scorer, has 69 points this season, putting him in the mix for his first scoring title.

The Sabres’ dearth of offensive talent has forced coach Ted Nolan to fill holes and try prospects in different spots. Larsson centered the second line briefly last week before getting promoted between Matt Moulson and Tyler Ennis on Saturday, when he scored the only goal in a 6-1 loss.

“You never know if you (can) ever do that, so it’s really nice,” Larsson said inside the Air Canada Centre about his promotion before the game. “I’m just going to enjoy it.”

Larsson wanted this opportunity badly. He complained about skating on the fourth line following his demotion to Rochester in January, drawing Nolan’s ire. When Larsson returned Feb. 15, Nolan told him to just worry about playing.

“He’s been a lot different,” Nolan said about Larsson’s latest recall. “I think he’s really just been concentrating on playing. I think sometimes when you’re young, (you worry about) how many minutes you get, who you’re playing with and all those type of things. Then, all of a sudden, you go through it one more time, you’re a little bit more mature on it.”

This could be Larsson’s last chance. He’s a restricted free agent following the season. The Sabres’ old regime acquired him from Minnesota late in 2012-13 in the Jason Pominville trade, so general manager Tim Murray isn’t that invested in him.

“I think he’s determined,” Ennis said. “He realizes this is his opportunity. He’s trying to take advantage of it.”

The 5-foot-11, 208-pound Larsson has been a slick AHL scorer for two seasons, compiling 29 goals and 78 points in 92 games with the Americans. But he hadn’t showcased much during his NHL recalls before Wednesday.

Still, his skill set is evident.

“It’s just a matter of getting him engaged from the start of the shift to the end of the shift.”

Sabres center Phil Varone didn’t want to leave the ACC ice Wednesday afternoon. The native of nearby Vaughn, Ontario, a town about 30 minutes north of here, wanted to soak everything in prior to his first game against the Leafs.

Wednesday was a special experience for the 24-year-old. About 50 or 60 family or friends attended his 22nd NHL game.

Sabres prospect Mark Pysyk, who was briefly hospitalized Feb. 28 after collapsing during a pickup basketball game in Rochester, skated with the Amerks on Wednesday.

Despite a battery of tests, the cause hasn’t been determined, according to the Rochester Democrat and Chronicle.

“All the testing I’ve done since it happened, they didn’t find anything,” Pysyk told the paper. “So there’s nothing to really worry about now, I don’t think.”

The 23-year-old will be able to participate in a full-contact practice next week, according to the paper. He could play again March 20.

When asked by a Toronto reporter if he expects to be back next season, Nolan replied, “I’m expecting to be here today.”

“I only look one day,” he said. “You never know, a bus goes off the road, who knows? You can’t predict the future. … The only thing you have is today. So that’s always been my philosophy in life.”

Notes: The Sabres made one lineup changing inserting defenseman Nikita Zadorov for Andre Benoit. … The Sabres have kept Cody Hodgson, a center most of his career, on the wing with top pivot Zemgus Girgensons injured. “I don’t question that stuff,” Hodgson said. “I just focus on what I can do.” … Prior to the game, Leafs president Brendan Shanahan suspended center Nazem Kadri two games for missing a team meeting Sunday morning. The 24-year Kadri is one of the Leafs’ most talented players.