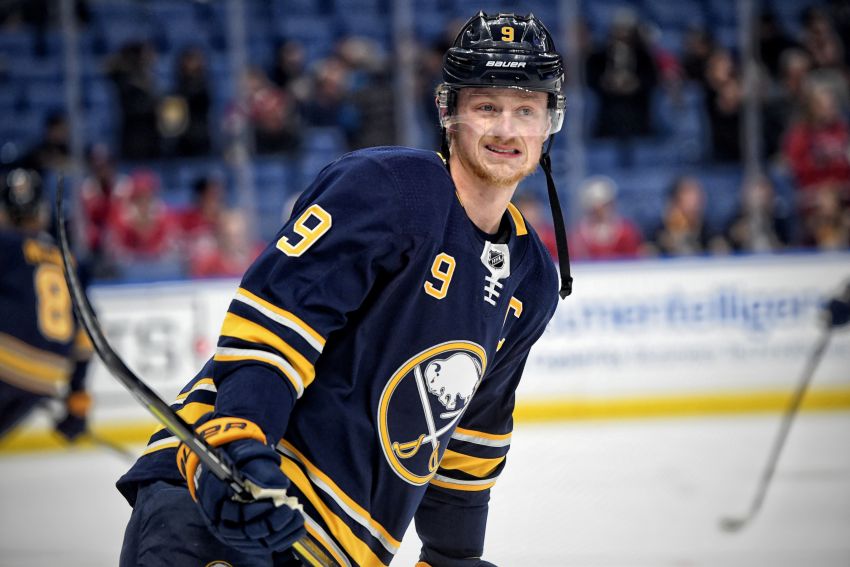 Jack Eichel has been on a tear. ©2018, Micheline Veluvolu

BUFFALO – Thirty-four games into his fourth NHL campaign, Sabres captain Jack Eichel is enjoying more than just a career year; the ultra-talented center is putting together one of the greatest seasons in franchise history.

Fresh off a four-goal, nine-point week, Eichel is up to 14 goals and 45 points entering tonight’s tilt against the Florida Panthers inside KeyBank Center. At his current pace, he would compile 34 goals and a whopping 109 points over a full season.

The Sabres haven’t had a 100-point scorer since the rollicking 1992-93 season, when Pat LaFontaine (53 goals and 148 points) and Alexander Mogilny (76 goals and 127 points) both surpassed the prestigious mark.

That, of course, was a different era. The NHL averaged 7.26 goals a game that season, according to hockey-reference.com. Today’s game is much tighter – 6.22 goals a game – which makes Eichel’s work that much more remarkable.

A slew of factors have helped elevate Eichel, who averaged 24 goals and 59 points over his first three seasons, to a superstar level.

Naturally, experience and maturity are huge. Having played 243 NHL games, Eichel has been around longer than most players his age.

Earning the captaincy probably changed Eichel, perhaps bringing him a greater focus. It was evident last season he was starting to act and talk more like a leader.

But the Sabres’ overall improvements might be the biggest reason behind Eichel’s MVP-caliber campaign. Right now, having earned 45 points, they rank second in the Atlantic Division. They’re 20-9-5. They won 25 games all of last season.

Skinner’s late addition – he was acquired from the Carolina Hurricanes on Aug. 2, an odd time for a star to be dealt – has helped push the Sabres and Eichel to a new level.

Eichel and Skinner have become arguably the NHL’s best duo and form two-thirds of perhaps the league’s best line with Sam Reinhart.

Skinner’s 24 goals ranked second in the league entering Monday’s games, putting him on pace for 58. The Sabres haven’t had a 50-goal scorer since 1992-93.

While they have played less than half a season together, Eichel and Skinner have quickly morphed into the Sabres’ most dynamic duo since LaFontaine and Mogilny.

Eichel assisted on both of Skinner’s goals Sunday, slickly feeding the sniper from behind the net twice.

“Skinny’s so strong on his in front of the net,” said Eichel, who has compiled 13 points during his six-game point streak.

Eichel’s empty-net goal then sealed the win, his fourth tally in two days. He also scored twice in Saturday’s 4-3 shootout road loss to the Washington Capitals before briefly putting the Sabres up in the third period Sunday.

“He’s just brought his game to another level, especially under the circumstances tonight, too,” Sabres coach Phil Housley told reporters in Boston. “Like, he played 24, 25 minutes (Saturday). (He) comes back and plays almost 20 minutes tonight and he plays at both ends. He’s attacking the game with speed offensively. He’s reloading with meaningful strides coming back into our zone. He’s just playing a 200-foot game, a very complete game right now.”

Two weeks ago, Eichel was having a huge playmaking season. His goal total, however, was unusually low. His shooting percentage was well below his career average.

Now, after scoring nine goals in the last six games, he’s shooting 9.5 percent for the season. His career average is 9.9.

It’s no coincidence Eichel has been shooting the puck more often. He has pumped 33 shots on goal in the last six games, a 27.3 percent shooting percentage.

Notes: Reinhart has five goals and 16 points during his 10-game point streak. … Eichel’s 17 multi-point games had him tied for the league lead entering Monday’s game. He has seven multi-point contests in the last nine outings and is just one shy of his career high. The Sabres sent defenseman Matt Tennyson to the Rochester Americans on Monday. … The Sabres had Monday off.