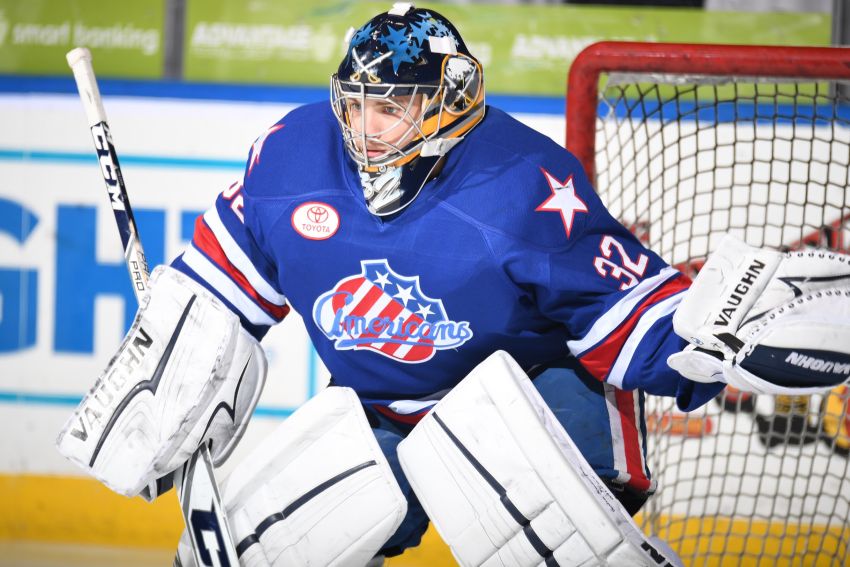 “Minnesota didn’t have a team, so I always rooted for Hasek and the Sabres,” the loquacious Wilcox said today after the Sabres recalled him from the AHL.

Wilcox, 25, spent time in the NHL last season, dressing as a backup five times with the Tampa Bay Lightning and Florida Panthers, according to NHLbackups.com.

“This is my third time and it still feels like the first time,” said Wilcox, who couldn’t stop smiling.

The Sabres summoned Wilcox because Lehner tweaked a lower-body injury Thursday and took himself out of the 6-3 loss to the Detroit Red Wings, Housley said. Ullmark suffered a concussion Monday, hours before his scheduled start against the Toronto Maple Leafs.

The Sabres have five games left. Housley said goalie Chad Johnson will start Saturday’s tilt against the Predators. But perhaps Wilcox could receive his first NHL action next week.

Housley wouldn’t say if he would play.

The 6-foot, 189-pound Wilcox signed a one-year, two-way contract with the Sabres on July 1.

“It was pretty cool to sign with the team that I always dreamed of playing on,” he said. “But I thought it would be a good fit for me. I’m really glad I signed here.”

“I’m honored to be up with the Sabres here, even if it is the final week, it’s just really cool,” Wilcox said. “I’ve had a smile on my face the whole time.”

Check back later for more on Wilcox, who had to lead his new teammates in a stretch on the KeyBank Center ice and say a few words today.

In other news, based on today’s lines, winger Jordan Nolan will be scratched Saturday. Winger Benoit Pouliot, the odd man out Thursday, skated with center Johan Larsson and Nick Baptiste.

Defensemen Nathan Beaulieu and Josh Gorges appeared to be the fourth pair today.