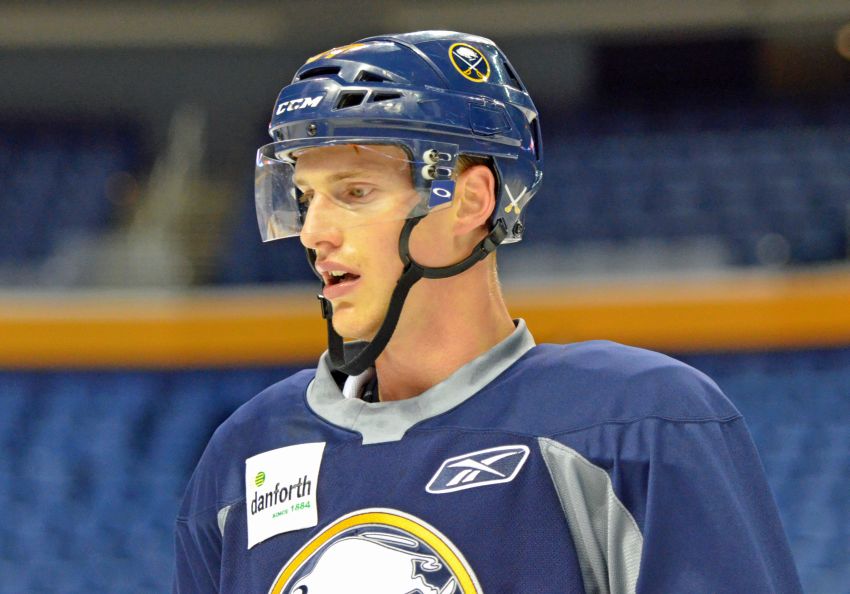 Tyler Myers is out for the season. ©2016, Dan Hickling, Olean Times Herald

BUFFALO – Tyler Myers’ first game back here will have to wait until another season. The Winnipeg Jets defenseman underwent knee surgery Thursday and will miss the rest of the year.

The Jets make their yearly visit to the First Niagara Center on Saturday afternoon.

After Myers’ knee is stabilized and the season ends, he will undergo major hip surgery that requires 16 to 20 weeks of recovery, according to the Winnipeg Free Press.

“He needs his knee to rehab the hip,” Jets coach Paul Maurice told reporters Thursday. “If we had waited to the end of the season and did the knee, it would have pushed the hip closer to May, which now gets closer to October and closer to the regular season before he’s back on the ice playing.”

His knee doesn’t need long-term rehab, according to the paper.

The Sabres dealt Myers, 26, to Winnipeg on Feb. 11, 2015 in the blockbuster trade that brought defenseman Zach Bogosian and winger Evander Kane to the Sabres.

Wingers Joel Armia and Drew Stafford, two other pieces of the trade, are still with the Jets.

Myers’ career faltered after a terrific 2009-10 rookie season in which he earned the Calder Trophy. Still, the smooth-skating defender slowly made his way back, just about regaining his old aggressive form before getting dealt.

The 6-foot-8 Myers had nine goals, 27 points and a career-high 72 penalty minutes this season.

“Coming into his own in Winnipeg,” Sabres coach Dan Bylsma said. “I’ve seen him be a guy who’s shown he’s a very good skater, very good mobility up ice, (an) offensive guy.”

When the Sabres defeated the Jets 4-2 on Jan. 10 in Winnipeg, Bylsma noticed Myers defending and showcasing an edge.

“That was something I hadn’t seen from him prior,” he said.

Some injury updates from Bylsma:

– Goalie Robin Lehner (ankle) has been rehabbing and working out off the ice and will see the team doctors Saturday.

– Winger Tyler Ennis, out with a concussion since Dec. 30, skated on his own and worked out today. He’s doing better and could possibly practice with his teammates “sooner than later.”

How’s this for a record-setting victory? Rochester coach Randy Cunneyworth earned his franchise-record 338th win when the Americans roared back from a 5-1 third-period deficit to beat the St. John’s IceCaps 6-5 in regulation Wednesday.