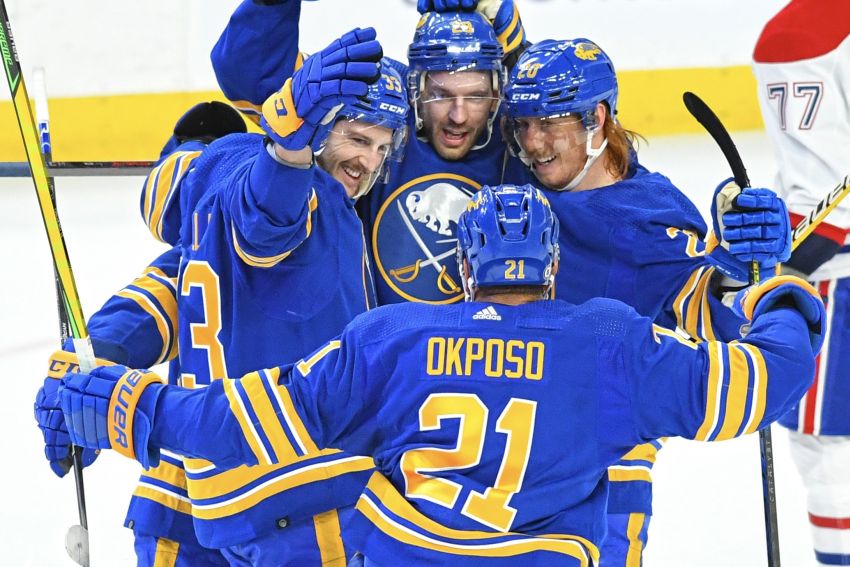 BUFFALO – After Thursday’s dismantling of the Montreal Canadiens in the season opener, veteran goalie Craig Anderson explained what might make the Sabres, a rebuilding team many have pegged to finish dead last again, such an intriguing group.

“First and foremost, it’s not what you don’t have,” Anderson following the Sabres’ 5-1 victory inside a noisy KeyBank Center. “It’s what you do have. And that starts with our leadership.”

In his first weeks with the Sabres, Anderson, 40, has seen coach Don Granato put together a plan that works for a roster mostly comprised of young players and veterans looking for another chance to prove themselves.

“We are a team that are young, can skate fast and are going to make mistakes,” Anderson said. “But they’re going to do it out of passion. And I think we’ve got a little bit naiveness right now, too, where we’re just going out there and playing what we’re told to do and reading and reacting.”

Granato, who was hired as the permanent coach in June, has installed a system that allows his players to handle the puck and make plays without the fear of making a mistake.

“And that starts with Donny giving them the confidence to do that and not bench them and not yell at them,” Anderson said. “It’s like, ‘Hey, you tried, it didn’t work. Let’s make a better play next time.’ And you know that that’s a recipe for success.”

That often translates to a team playing a loose, aggressive style like the Sabres showcased throughout the most exciting season opener in a long time.

Make what you will of the roster, but this new group of Sabres clearly enjoys playing for each other and has bought into Granato’s plan.

The Sabres looked hellbent on proving all their doubters wrong from the get-go Thursday, pumping seven of the eight first shots on goal.

Okposo, who spoke last week about the belief and enthusiasm the Sabres possess, celebrated more enthusiastically than usual after scoring.

“It meant a lot,” Okposo said of the goal. “I was fired up when I scored. Just the people right there, I mean, you don’t have those tarps anymore and people are right there and you can see their faces and the energy they had. Yeah, I was fired up.”

While KeyBank Center was opened to full capacity for the first time in nearly two years, only 8,467 fans attended Thursday’s game. Still, the crowd grew louder and more excited as the Sabres’ lead grew, breaking into the “Shout Song” and doing the wave.

“Everybody was fired up tonight to play in front of a normal building,” Okposo said. “Obviously, not to full capacity, but the energy in there, like the chants in the third and the wave. … We were just talking about it in the locker room, how fun it was to play in front of the fans.”

Zemgus Girgensons was so fired up before the game had trouble trying to take his normal pregame nap. The Sabres forward hadn’t played a regular-season game since March 9, 2020, a 584-day stretch. He knew fans would be coming back.

It made for a restless afternoon.

“You kept thinking about the game,” said Girgensons, who missed all of last season recovering from hamstring surgery. “I was kind of like a kid again going to hockey practice.”

Girgensons, 27, enjoyed one of the most memorable nights of his career, scoring the Sabres’ second goal and creating winger Anders Bjork’s goal by blocking a shot.

Granato, who named Girgensons and Okposo alternate captains earlier this week, knew how much the game meant to the popular veterans.

Okposo, 33, battled injuries last season, struggling to find a groove for months. When he finally found some consistency, an errant puck broke his cheekbone.

“Zemgus and Okie, you can tell,” Granato said. “Just in their conversations with me, this mattered to them significantly. For Zemgus, he hasn’t been able to play. He missed the whole last season. … He’s so committed to being here. This means so much to him.”

Okposo looked rejuvenated, banging bodies and creating offense throughout the contest. The opening period might’ve been his best with the Sabres.

“I felt good all camp,” Okposo said. “I think the way that we’re practicing, really up-tempo and just going. I mean, every day just trying to go as hard as I can and then the games are feeling easier. We’re doing a lot of different drills where pucks are in tight, there’s a lot of traffic, and it just seems to translate well in the game and things are happening slow out there for me. I’m just gonna try and keep going.”

Winger Victor Olofsson and center Tage Thompson scored the Sabres’ other goals, both power-play tallies. Anderson looked impressive throughout the contest, stopping 30 shots, including a breakaway save early.

Sabres center Casey Mittelstadt left the game in the second period. Granato did not have an update.

With Mittelstadt out, Girgensons took some shifts at center.