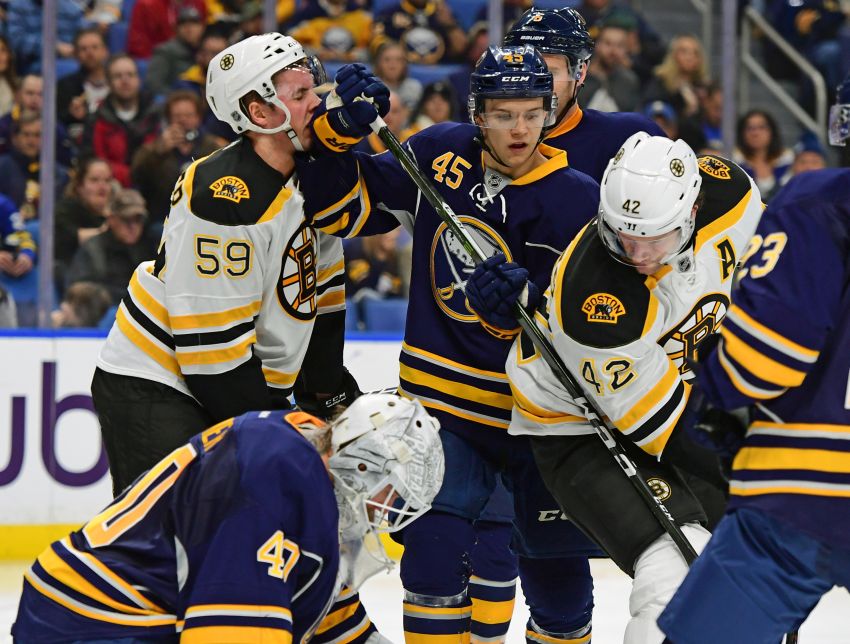 BUFFALO – In his first three NHL games, defenseman Brendan Guhle showcased consistency and poise, performing like a veteran, not a 19-year-old rookie the Sabres recalled from junior hockey on an emergency basis.

But defensemen Josh Gorges and Dmitry Kulikov returned from injuries for Friday’s 4-1 loss to the Washington Capitals, meaning Guhle had to be sent back to the Western Hockey League’s Prince George Cougars before the game.

The collective bargaining agreement dictates Guhle can’t play when the Sabres have enough healthy defensemen. So for this year, yes, Guhle is probably gone. They can’t keep him, even if they’re willing to burn the first season of his entry-level contract.

Guhle will likely be a regular with the Sabres next season, though.

“I’ve had a lot of fun and it’s been a good experience,” Guhle said Friday morning inside KeyBank Center.

Against some stiff competition, Guhle made a lasting impression.

“He was on the ice in Washington against Ovechkin numerous times and had to defend against (him),” Sabres coach Dan Bylsma said. “I think there was significant evidence and proof that he showed he can play at this level, showed he could play against those types of players.

Bylsma said Guhle reminds him of Olli Maatta, a young defenseman he coached with Pittsburgh. Maatta cracked the Penguins’ loaded lineup as a teenager in 2012.

Guhle was no stranger to the Sabres, having almost made the team out of training camp the last two seasons. He has five goals and seven points in 19 junior games this season.

Gorges, meanwhile, has been pain-free for three or four days, Bylsma said. After the veteran suffered a non-displaced fracture in his left foot last Thursday, the Sabres said he would miss “weeks.”

Kulikov missed 13 games with a lower-back bruise he suffered Sept. 30. He played 12 games with the injury, however. The Russian hadn’t played since Nov. 9.

In other injury news, winger Nick Deslauriers returned after a knee injury he suffered Oct. 29 sidelined him 19 games. Deslauriers replaced center Derek Grant, who missed the game with the flu, on the fourth line.

The Rochester Americans have signed Buffalo-born forward Justin Vaive, 27, to an AHL contract for the rest of the season.

Vaive, the son for former Sabres sniper Rick Vaive, played 21 games with the Amerks on a professional tryout.

The Sabres traded Weber, 28, to the Capitals in February. The Pittsburgh native last played in the minors in 2009-10.