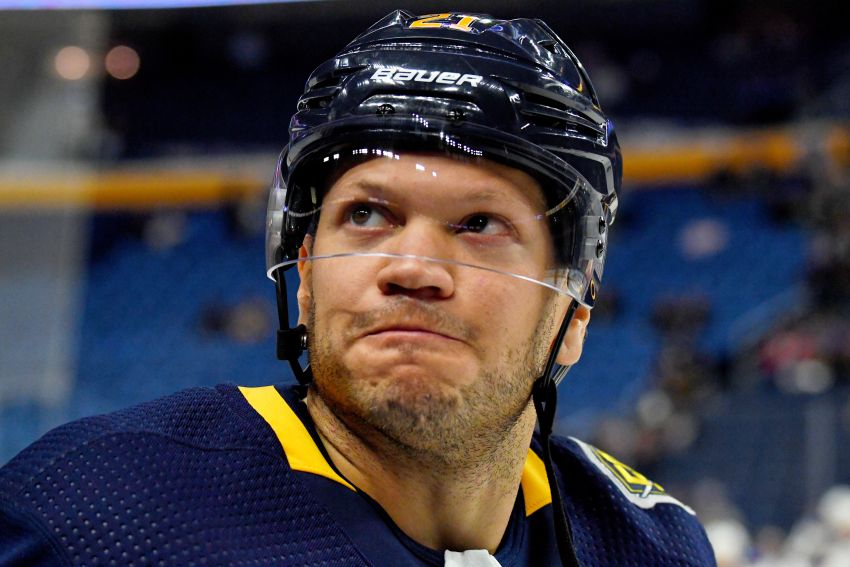 BUFFALO – It’s pretty easy to tell when Kyle Okposo’s thriving. At his best, the Sabres winger is in the thick of the action, bumping bodies and aggressively pursuing and moving the puck.

“I love the grind,” said Okposo, whose Sabres host the Boston Bruins tonight at KeyBank Center following a three-day Christmas break. “I love just being hard on pucks down low, taking pucks to the net, fighting for every inch, hunting pucks down, creating turnovers.

“I think that stuff, I thrive on that and I really enjoy doing that.”

In eight outings since returning from a concussion Dec. 7, Okposo, 31, has been one of the Sabres’ top and most active forwards, scoring three goals and pumping 20 shots on net.

Twelve years into his career, at an age when many scorers are graying or no longer assets, Okposo has embraced a new checking role and essentially reinvented himself this season.

“Highly paid veteran players accepting new roles is difficult transition for most players,” said one scout who has watched Okposo regularly over the years.

So what has helped Okposo, who’s in the fourth season of a seven-year, $42 million contract, adapt so well?

“He seems to be moving his feet and skating better,” the scout said. “This allows him to play with more pace which allows him to get in on the forecheck and pursue the puck. I think he was used to playing with good players that would go and get him the puck.”

After suffering a scary concussion in March 2017 – he was hospitalized in intensive care – Okposo often struggled for two seasons.

His offensive production dropped. His rating skyrocketed to a ghastly minus-34 in 2017-18. His ice time plummeted. He suffered at least two more concussions.

This season, Okposo returned hellbent on making an impact.

“I was ready to do whatever the team asked of me,” he said Sunday.

Not surprisingly, Krueger cast Okposo in a new role, putting him at right wing beside center Johan Larsson and Zemgus Girgensons.

“I … found some chemistry with Larry and Z right away,” Okposo said. “I think we’ve been pretty solid all season. Just whatever the team needs, that’s what I’m prepared to do.”

Krueger said: “Kyle has not asked for a shortcut to the role that he has right now. He, from Day One in training camp, has put in the work. He came ready, came in great shape and he has 100% embraced the habits we are looking for as coaches.”

From the get-go, Okposo’s trio has been perhaps the Sabres’ most consistent and soundest defensively, remaining together nearly all season.

Girgensons, Larsson and Okposo have the sixth-lowest goals-against per 60 minutes – just 1.47 – of any line or defense tandem in the NHL, according to MoneyPuck.com.

Okposo, having scored 18 or more goals in a season six times, is the only player with a significant offensive history in the big leagues.

Still, the line has generated offense and loads of zone time. At 53.7%, Okposo has the highest Corsi For – the percentage of shot attempts by his team while he’s on the ice five-on-five – on the Sabres, according to NaturalStatTrick.com.

Larsson (52.1%) ranks fourth on the team in Corsi For and second among Sabres forwards. Meanwhile, Girgensons (51%) stands eighth overall and fourth among forwards.

Okposo said he enjoys the simplicity the line showcases.

“We make some plays at times, but a lot of the times it’s little 10-foot plays, little support plays in the offensive zone,” said Okposo, who has compiled four goals, eight points and an even rating this season.

Okposo, who’s used to playing on the first or second line, said his new role is “definitely a bit different.” While he said he possesses the same mentality, he’s playing fewer minutes than in the past.

Earlier in his career, he usually played around 18 or 19 minutes a game.

“It’s something that was an adjustment,” he said. “There’s times in a game where maybe you’re not going as frequently, and then you have to be ready for that next shift and just to be prepared to play a sound game, whether it’s offensively or defensively.”

Of course, concern was high when Okposo suffered another concussion Nov. 16. But after missing 10 games, he has returned at a level arguably higher than his early-season form.

In Okposo’s last two appearances – the flu sidelined him for Monday’s 3-1 road loss to the Ottawa Senators – he played 16:52 and 15:22, his highest totals this season.

“Kyle’s just building an exciting season,” Krueger said. “After his injury, he’s become a bigger offensive threat. We have a lot of confidence in him without the puck.”