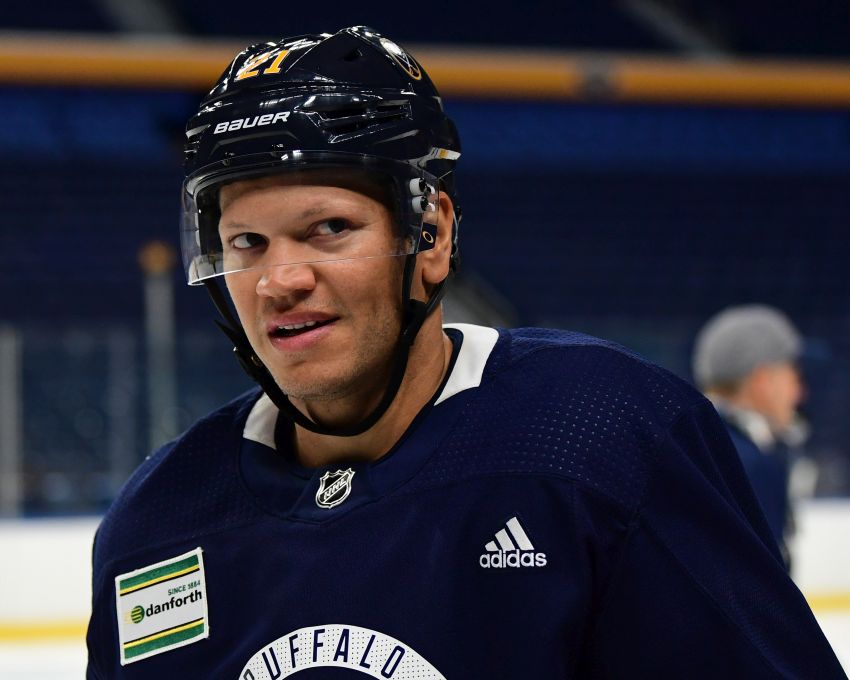 BUFFALO – Long after perhaps the worst season of Kyle Okposo’s 12-year NHL career mercifully ended, everything about it – the Sabres’ freefall down the standings, his meager production – kept weighing on the veteran winger.

“It stayed with me for a long time,” a candid Okposo told the Times Herald following Monday’s session of training camp inside KeyBank Center.

Instead of returning to Minnesota following the season, Okposo and his family stayed in Clarence and enjoyed their first full summer in the Buffalo area. He likes new coach Ralph Krueger, someone he said “has a very clear, concise plan.”

But it took Okposo time to get over an arduous 2018-19 campaign.

Just like the Sabres, Okposo started off well, scoring clutch goals and producing at a 50-point pace into November.

Then, of course, the Sabres experienced a stunning collapse following their 10-game winning streak, falling from first overall to out of the playoffs.

Okposo, meanwhile, endured a 21-game goal drought, suffered at least his third concussion in less than two years and played fewer minutes (just 13:47 a game) than he ever had.

“It just weighed on me,” Okposo said. “I felt like I couldn’t dig myself out of it no matter how I tried to do it mentally. It just got tough. I just tried to do my best to fight through it with the tools that I had.”

Okposo mustered only 14 goals and 29 points in 78 outings, career-low offensive totals for a full season.

“I kind of said, ‘OK, stop living in the past. Let’s look to how we move forward. You can’t change anything about it,’” said Okposo, who’s beginning the fourth season of a seven-year, $42 million contract.

So Okposo said he decided to “rededicate” himself.

It often sounds like cliché when someone talks about his “great offseason.” Still, the affable Okposo seems energized by his productive summer and Krueger’s presence.

“I felt like I have new tools to try to use to keep in a good frame of mind and that I need to be the player that I know that I am,” said Okposo, who wouldn’t reveal what “tools” he has developed.

He added: “I’m really, really looking forward to playing and I’m just excited about the year.”

Krueger, who was hired to replace Phil Housley on May 15, has something to do with Okposo’s excitement.

He knew very little about Krueger, whose NHL head coaching career consisted of one lockout-shortened season with the Edmonton Oilers in 2012-13. So he said he called three people who had played for Krueger – Andrew Cogliano, Sam Gagner and former Sabres star Thomas Vanek – and heard “very positive things.”

Through less than one week of training camp, Okposo said he has learned Krueger, 60, is “the leader.”

“Everybody falls in behind him,” he said. “That’s probably not what his intent is. He’s probably not going out and saying, ‘Everyone needs to follow me.’ But you know that he’s in charge and you do what he says.

“I think that’s a very great quality to have just by your presence. When you can have a presence where people naturally follow you, I think that’s something special.”

Staying put for a full summer was special for Okposo. Since the oldest of their three children is now in school, Okposo, and his wife, Danielle, sold their home in Minnesota and made Clarence their year-round residence.

“We loved it,” Okposo said.

On weekends during the summer, the family would often explore.

“It was like, ‘OK, what should we try today?’” he said. “There’s tons of like festivals for kids and just tons of stuff to do on weekends.”

Okposo likes the Buffalo area so much he and his family would consider staying whenever he retires.

“Oh yeah, love it,” he said. “The kids are starting to get kind of ingrained in the community.”

The Sabres, who have today off, could pare down the roster soon.

“We don’t feel a big need to cut the numbers down quickly here,” Krueger said Tuesday morning in Buffalo. “We do feel that the group is learning a lot together.”

Krueger, who plans to meet with general manager Jason Botterill today, said he has divided camp into three phases.