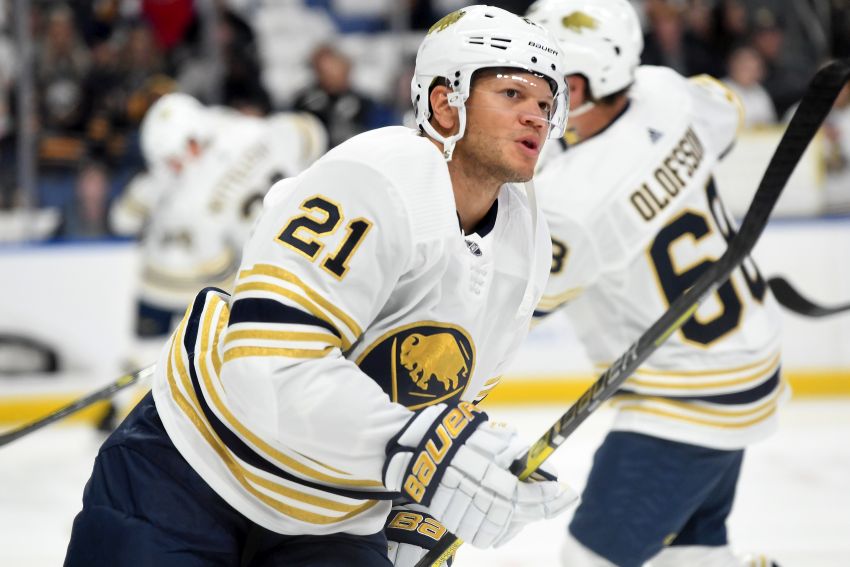 BUFFALO – Right away, Kyle Okposo knew something was wrong. Having suffered at least three concussions earlier in his Sabres career, the winger understands the symptoms well.

“I just knew right away that the neck wasn’t good,” said Okposo, who suffered his fourth concussion Nov. 16 when he collided with Ottawa Senators defenseman Ron Hainsey leaving the bench.

Right now, Okposo feels good again. The affable veteran smiled and was upbeat Monday morning after skating inside KeyBank Center, his first time back with his teammates. He would like to return during the team’s upcoming three-game road trip to western Canada, which starts Thursday against the Calgary Flames.

“I’d love to play tonight,” he joked prior to the Sabres’ 7-1 win over the New Jersey Devils.

Sabres coach Ralph Krueger said Okposo is still “a ways away from any type of contact.”

“We still don’t expect him back here for a while,” he said. “This is a process we need to be careful with.”

Barely two weeks ago, Okposo, 31, wondered if his 12-year NHL career could be over.

“That’s the first thing that kind of pops into my head, as I’m sure it did with a lot of other people that know my history,” Okposo said of retirement. “When these things happen repeatedly, I just want answers, I want to make sure that I’m going to be OK later.”

Okposo’s Sabres career has been riddled with concussions.

The American was hospitalized in intensive care after suffering one in March 2017. He sustained another concussion in 2017-18 and one during a fight last season.

On Nov. 16, Okposo said a linesman blocked him from seeing Hainsey as he tried to bolt up the ice.

“It’s not a fun place to be and (I was) super emotional after the game,” he said. “After that game against Ottawa, I just went home and really thought about a lot of things. I’ve been through some dark times with it, obviously. The thought of going back there, it’s not fun. It’s a very uneasy feeling.”

So Okposo sought answers to learn if he was well enough to play.

He added: “I’m fortunate enough I have the right people around me now and have enough support to lean on people to know I’m going to get better.”

Okposo said the outpouring of support he has received is “a humbling thing.”

“It makes you realize that there’s a lot of people that care about you, and I think that in this business, a lot of times us as professional athletes are looked at as not always as a human being first,” he said. “We’re looked at more (as) people that love what they do and people you should look up to and kind of stay silent and almost look at it as just a little bit different.

“The outpouring of support that I got was really special, and to know that that many people cared and want to see me healthy was a special thing.”

The Sabres have gone 2-4-2 without Okposo, who played well earlier this season in a third- or fourth-line role beside center Johan Larsson and Zemgus Girgensons.

When Okposo and veteran forwards Marcus Johansson (upper body) and winger Vladimir Sobotka (right knee) were all injured last month, the Sabres had about 1,000 games of NHL experience sidelined.

“As a person, you all know the value of (Okposo) in the room and the loss of experience that we had back-to-back-to-back there with Johansson, Sobotka, Okposo going out,” Krueger said. “We felt a difference in the team.”

Sabres defenseman Rasmus Dahlin, out the last four games with a concussion, watched Monday’s morning skate from the bench.

Krueger said the Swede’s recovery is “still in the step-by-step (phase).” Dahlin is doing off-ice workouts.

“We need to be really careful and take little baby steps at a time,” Krueger said.

Tennyson signed a two-year, two-way contract worth $1.4 million in the NHL on July 1.

“All you’re looking for in free agency is a chance, an opportunity to go play and stay in the lineup,” he said. “I think this was obviously the best fit at the time, and so far so good here.”

Tennyson, 29, played 19 games with the Sabres and 97 contests with the Rochester Americans.

“My time here, I have no regrets, no complaints,” he said.

Notes: The Sabres dressed 11 forwards and seven defensemen again, meaning they scratched forwards Jean-Sebastien Dea and Curtis Lazar. … Sabres defenseman Henri Jokiharju played on the top power play Monday. “We just like the way he solves pressure,” Krueger said of using the Finn. The Sabres converted only one of 37 chances on the man advantage in November. … Sabres center prospect Dylan Cozens, the seventh overall pick in June, has been named to Team Canada’s training camp roster for the upcoming World Junior Championship.