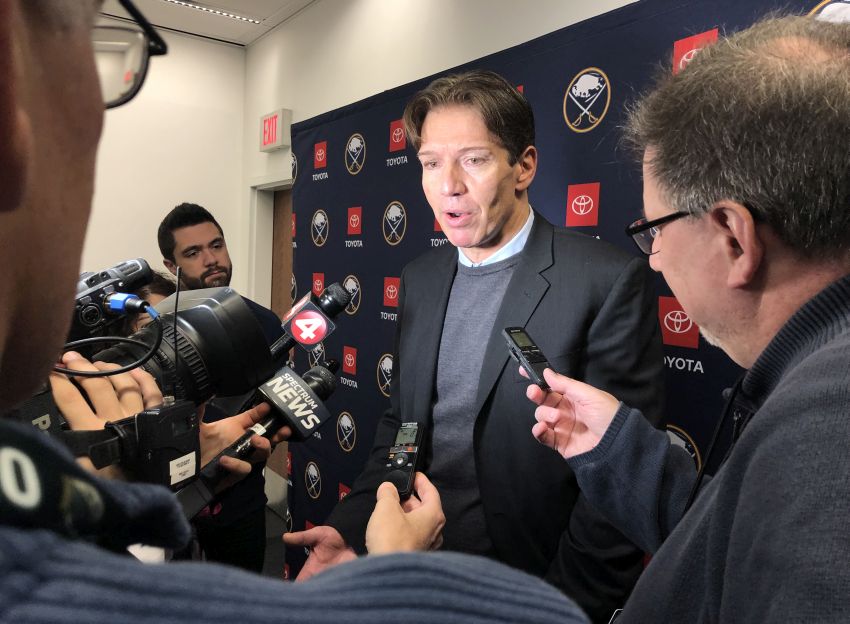 BUFFALO – Their relationship started in 1986. Uwe Krupp was a teenager who had just joined the West Germans for the World Championship in Moscow. Ralph Krueger was the team’s veteran star.

“I was a really young player on a very experienced German team,” said Krupp, a 6-foot-6 defenseman who played 327 games with the Sabres in the late 1980s and early 1990s. “Ralph was one of the older players. There wasn’t so much talking to the lanky, too tall, skinny kid from Cologne. But Ralph was there every day, he took a moment to say hi, see how it goes.

“It’s been a relationship since then, really. Then your paths cross again after hockey.”

Krupp often coached against Krueger, who led the Swiss, at the World Championship and Olympics. Krupp also had Krueger’s son, Justin, on two junior teams.

Krueger respects and trusts Krupp, so before the Sabres hired him as coach in May, he called his friend to ask his opinions of the team and Buffalo.

“He always spoke proudly of his time here in Buffalo,” Krueger said.

Krupp told Krueger he was “going to love it” in Buffalo.

“The hockey aspect of it, you’ll go to a great setup, everything’s going to be on a very high level,” Krupp said. “But I think the part (that) was important for me to tell him, because knowing him, he’s a real-people oriented person, is that he’s going to love the people.

It’s a place that still holds a special place close to Krupp’s heart.

On Dec. 12, Krupp, who now coaches HC Sparta Praha in the Czech Republic, helped the Sabres celebrate the 1980s and their first home, Memorial Auditorium, on “Aud Night.”

Up to that point, Krupp said he had only lived with his parents. In Buffalo, he was learning English and trying to establish himself in the world’s top hockey league.

“A wide spectrum of adjustments,” he said. “But … coming to Buffalo, it was special in a way that the environment that was set up in the Sabre organization and just the people of Western New York, it was a real safety net for me. It was a special time.”

Krupp joined the Sabres at a difficult time in the franchise’s history. The legendary Scotty Bowman, who drafted Krupp in the 11th round in 1984, had been fired. The Sabres would finish dead last in 1986-87.

“It was just so much over my head it just didn’t sink in for a long time on a lot of levels,” Krupp said of what was transpiring. “But Scotty always was a huge factor in me coming over, and him leaving the Sabres, you just didn’t know what was happening.”

But Krupp would develop into a terrific defenseman with some help. He said his support network included Mike Foligno, Craig Ramsay, Mike Ramsey and Lindy Ruff.

“They were exceptional people,” he said. “They took care of me.”

Krupp played for some talented-laden Sabres teams that always seemed to underachieve. In 1989-90, for example, they finished third in the 21-team NHL, yet fell to the Montreal Canadiens in the Adams Division semifinal.

He never won a single playoff round with the Sabres.

“We were missing that one piece of the puzzle that gave us the edge to move it on to the next next round,” Krupp said. “There were great teams, they were good players. You look at when the guys left, they’ve all had a measure of success and won Cups and gained a measure of respect around the league.

“So it’s a little sad in that way that we didn’t.”

In October 1991, the Sabres traded Krupp to the New York Islanders in the blockbuster deal that included Pat LaFontaine and Pierre Turgeon.

“It’s brought up from time to time,” Krupp said of the memorable goal, “but … I don’t really live that moment very often.”