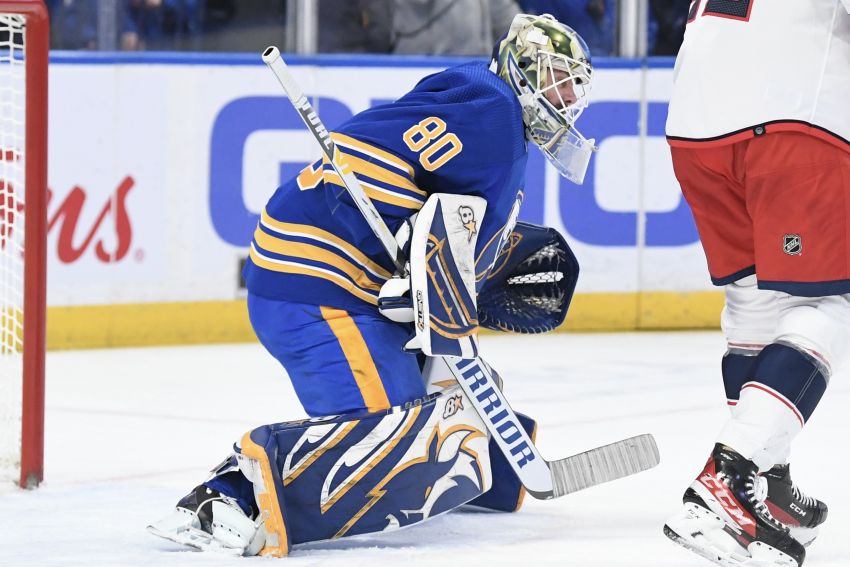 The three-game suspension the NHL handed goalie Aaron Dell on Wednesday for his illegal hit that injured winger Drake Batherson has created a major problem for the Buffalo Sabres.

Right now, the Sabres have just two healthy goalies in the organization with NHL contracts: Dell and Michael Houser, who has played just six NHL games in his 10-year career.

Anderson, 40, started practicing again last week in a non-contact role and is pushing to return before Tuesday’s road game against the Vegas Golden Knights, Buffalo’s final outing before the NHL All-Star break. But the veteran, who hasn’t played since Nov. 2, must first ramp up his practice activity and see how he responds.

Perhaps Anderson can at least back up Houser. But what do the Sabres do if he can’t? Would they acquire another goalie? Stay tuned.

The Sabres, who had Wednesday off, continue their four-game road trip Saturday against the Arizona Coyotes before playing Sunday against the Colorado Avalanche.

After Subban was injured Jan. 11, the Sabres signed Houser, who was playing with the Rochester Americans, to an NHL contract the next day.

The NHL announced Dell’s suspension early Wednesday night after he had a hearing with the NHL Department of Player Safety earlier in the day.

Batherson suffered a high ankle sprain in Tuesday’s 5-0 win over the Sabres, according to The Ottawa Sun, when Dell interfered and hit him into the end boards. He won’t be able to play in his first NHL All-Star Game on Feb. 5.

With about a minute left in the first period Tuesday, after he stopped the puck for defenseman Mattias Samuelsson beside the net, Dell put his left shoulder into Batherson as Ottawa’s leading scorer pursued Samuelsson. Batherson’s feet hit the ends boards awkwardly and he had to be helped off the ice.

“It is important to note this is a body check, not merely a collision,” the department said in a video explaining the suspension. “Dell is looking up ice and is aware of the path Batherson is taking in order to avoid contact with Dell. … Dell takes an active step into Batherson, shifting his weight and delivering a hit to an unsuspecting player that causes a dangerous fall into the boards.”

Dell’s hit, of course, was interference.

“Batherson does not have the puck and is therefore not eligible to checked on this play in any manner,” the department said. “Batherson does not and should not expect a shoulder check from Dell in this situation, much less a high, hard shoulder delivered as Batherson travels towards the boards with speed.”

Dell lowers the shoulder on Batherson and he took a bad fall into the boards. #LetsGoBuffalo #GoSensGo pic.twitter.com/FtC3ILEIlJ

The NHL on Wednesday named Senators captain Brady Tkachuk as Batherson’s replacement for the game in Las Vegas.

Dell said following the game he was trying to buy time for Samuelsson and step into Batherson’s lane.

“I hope he’s all right,” Dell said. “I wasn’t trying to hurt anybody.”

Incredibly, Dell, 32, is the first goalie the NHL has suspended for an on-ice incident since the Calgary Flames’ Jamie McLennan was banned five games for slashing Detroit Red Wings forward Johan Franzen in the 2007 playoffs.

Dell has struggled this season, compiling an awful 1-8-1 record in 12 games. Among goalies who have played 10 or more times, his 4.03 goals-against average ranks last and his .893 save percentage is the fifth-lowest number.