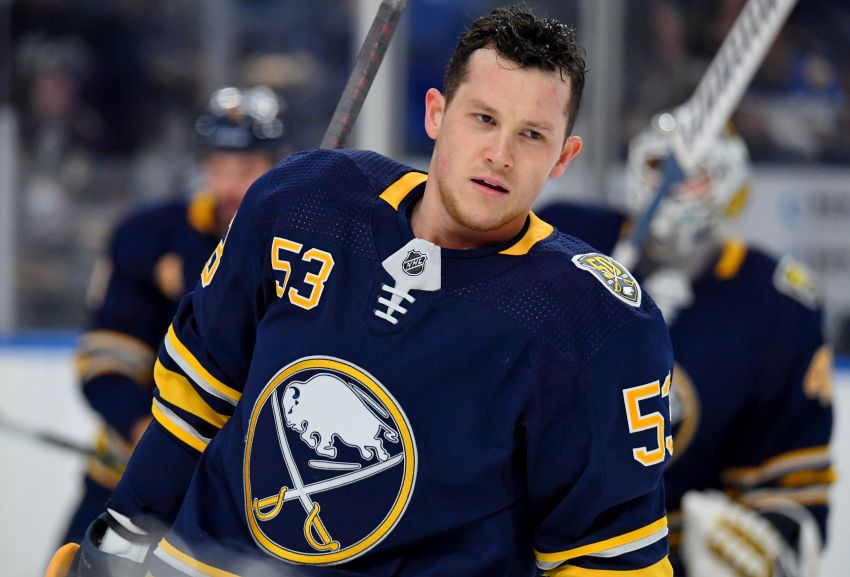 Jeff Skinner could be sidelined around a month. ©2019, Hickling Images

BUFFALO – Forget that Jeff Skinner hadn’t scored in 11 games before suffering an upper-body injury Friday. Forget that after enjoying his first 40-goal campaign, the Sabres winger has only produced 11 goals in 39 contests this season.

Skinner, who will be sidelined three to four weeks, the Sabres announced Saturday, can be a lethal scorer. In his last few outings, he channeled his 2018-19 form, showcasing the tenacious style that helped make him an NHL All-Star.

The struggling Sabres, a team that has scored just five goals in their last four games entering tonight’s road contest against the Boston Bruins, sorely need him. They don’t exactly possess a lot of forward depth.

“It’s definitely a setback,” Sabres coach Ralph Krueger said of Skinner’s absence. “He was definitely feeling good of late, too, and it looked like he was on the verge of breaking out. We all know he’s streaky and we could’ve used that streakiness right now.

“But it’s gone and we need to fill the hole. Of course, that’s what we’re focusing on now, how to potentially mix the lineup up to get two lines at least scoring.”

Not surprisingly, Krueger overhauled his lines for Saturday’s practice inside LECOM Harborcenter, promoting Kyle Okposo to right wing on the top line with center Jack Eichel and rookie Victor Olofsson.

“Those two guys have been driving our engine all year, especially Jack,” Okposo said inside KeyBank Center.

Winger Sam Reinhart, meanwhile, moved from his usual spot beside Eichel to the second line with center Johan Larsson and Marcus Johansson.

“That’s a really interesting and good line for us,” Johansson said. “Larry’s been playing very well all year for us, both offensively and defensively. (He) takes big responsibilities out there both ways, and I think that can make a lot of room for me and Sam to do our thing.”

While Johansson has played center all season, he has spent most of his NHL career as a winger.

“It’s harder going the other way,” Johansson said of moving to center. “Wing is kind of almost like there’s a little less to think about. When you play wing you still end up playing the center position at times in your own end.”

Krueger, as he often does, wouldn’t commit to using the new combinations in a game.

“If we do decide to break them up, you can put them together any time during the game, too,” Krueger replied when asked if it was tough to change the top line. “We’ve done that before. I think when you go through the history of a season and the way you build a season, sometimes it’s also refreshing to just have different linemates and different partners.”

In moving Larsson, who has missed the last three games with an upper-body bruise, and Okposo, Krueger broke up one of the NHL’s most consistent trios.

From the get-go this season, Larsson, Okposo and Zemgus Girgensons have formed the Sabres’ most reliable line, limiting scoring chances and buzzing around the offensive zone.

Krueger believes moving them to other lines – Girgensons practiced with center Curtis Lazar and Evan Rodrigues – could be beneficial.

“That line, how it’s been, maybe spreading them out and taking their habits into other lines might just deepen the way we present ourselves,” Krueger said.

Even before Skinner, 27, left favoring his right shoulder after Bruins star David Pastrnak hit him about four minutes into Friday’s 3-0 loss, Krueger was considering breaking up his trios. But following a three-day Christmas break, he felt Friday wasn’t the right time.

“We were definitely on the verge,” he said.

While Krueger didn’t get into specifics, that could’ve included putting Skinner back beside Eichel.

Last season, Skinner and Eichel formed one of the NHL’s most dynamic duos. On this date a year ago, Skinner had already scored 26 goals in 39 games.

Krueger, however, likes balancing his lines. So Skinner has spent most of this season skating at left wing beside Johansson.

“We felt his game, he was really getting a good combination of giving us defensively what we needed and also adding to the offense.”

Larsson, who also skated before Friday’s game, could return tonight.

“See how I feel and hopefully I can go,” he said.

Krueger also said the Sabres could recall a player.

In other lineup news, defenseman Marco Scandella, who missed Friday’s game because he was sick, practiced Saturday.