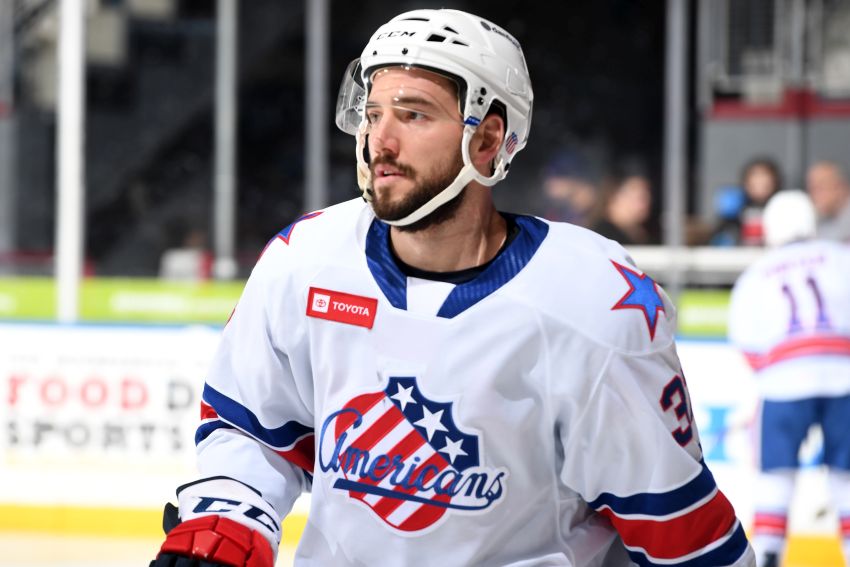 Dalton Smith is in his third year with the Amerks. ©2019, Micheline Veluvolu, Rochester Americans

The Buffalo Sabres have signed forward Dalton Smith to a one-year, two-way contract worth $700,000, the team announced this morning.

Smith, 27, has been playing on an AHL deal with the Rochester Americans.

Update: Smith is on the ice with Sabres for this afternoon’s practice. The Sabres host the Tampa Bay Lightning, a team that has pushed them around this season, Tuesday.

The 6-foot-2, 210-pound Smith possesses an agitating style and regularly fights. In seven AHL seasons, he has compiled 26 goals, 54 points and 646 penalty minutes in 340 games.

Smith has surpassed 100 penalty minutes four times as a pro, including in each of his first two seasons with the Amerks.

This year, he has compiled one goal, three points and 27 penalty minutes in 21 appearances.

The Columbus Blue Jackets drafted Smith in the second round in 2010, 34th overall. His father, Derrick, played 537 NHL games.

In other news, the Sabres announced today Saturday’s home game against the Florida Panthers will start at 1 p.m. instead of 7 p.m. The Bills, of course, play a wild card playoff game against the Houston Texans at 4:30 p.m.