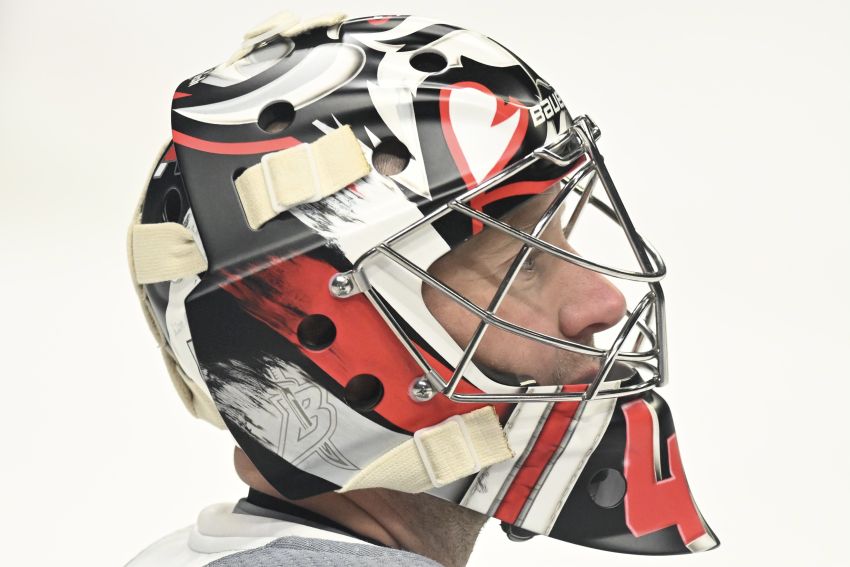 Take, for example, the 20-year veteran’s splendid 40-save performance in Tuesday’s 6-0 shellacking of the Los Angeles Kings, the 43rd shutout of his decorated career.

Anderson was the Sabres’ backbone as they struggled to generate offense early, making 16-first period stops and 30 saves through 40 minutes as the game remain tied at 0.

“The guy looks younger out there every day,” said winger Alex Tuch, who scored a power-play goal during the Sabres’ wild six-goal third-period outburst. “He played unbelievable. He was seeing everything, he was reading the play well. He was in full control out there. There was no panic in his game and it really gives the guys confidence.”

Anderson looked sharp all night, sometimes barely moving to stop the puck as the Kings peppered shot after shot on him before the crowd of 12,873 fans at KeyBank Center.

“He reads the plays so well, which allows him to anticipate where the next shot’s coming from,” said center Tage Thompson, who scored two power-play goals and added an assist. “And, I mean, he’s been around for a while so he’s got experience, so sometimes it does look really easy for him.”

Anderson’s stellar goaltending, coach Don Granato said, allowed the Sabres “to get to the game that needed to be played.”

The Sabres, the NHL’s highest-scoring team, registered just three shots on Kings goalie Pheonix Copley in the first period. More than halfway through the contest, they had six shots.

Then, incredibly, they scored six goals in one period for the second time in a week. They also scored six times in the first period of last Wednesday’s 9-4 road victory over the Columbus Blue Jackets.

Anderson, who registered his first shutout since March 26, 2019, which, coincidentally, was against Buffalo, said the Sabres and Kings played “a little cat and mouse game.”

“They had our number early,” he said. “We just weren’t generating much and that can be frustrating. But the shot clock’s deceptive sometimes. I think they were getting some chances, they got a couple quality chances, but for the most part they were getting a lot of point shots through that weren’t super dangerous. …

“They play a heavy game and it was just a matter of time if we stuck with it, stuck with our game plan, that one team had to break. Tonight, it was them.”

Granato believes the Sabres’ ability to block out any frustration and stay in a close game illustrates progress. He said opponents have recently focused on defending hard and stymieing them.

Thompson’s wicked one-timer opened the scoring 1:21 into the third period. Winger Victor Olofsson made it 2-0 at 9:56, one-timing linemate Rasmus Asplund’s pass from behind the net.

Then the Sabres began annihilating the Kings.

Tuch scored at 14:31, putting the game out of reach. Thompson scored again at 16:27 before center Peyton Krebs scored his third goal in the last four outings at 18:33.

Sabres center Dylan Cozens recorded three assists, his fourth three-point game in the last six contests. He has registered 22 points in his last 18 games. Thompson, who has scored a team-high 23 goals, has compiled a whopping 41 points in his last 22 games.

While the Sabres’ biggest stars will receive most of the attention, Granato took time to single out his third and fourth lines.

Zemgus Girgensons, the left wing beside Krebs and captain Kyle Okposo, drew three penalties. Meanwhile, Granato said the line of Asplund, Olofsson and center Tyson Jost “led us with a deeper sense of objective of how we needed to play this game.”

“Aspy was a big part of that,” Granato said.

A simple chip in behind the Kings’ net created Olofsson’s goal.

“Right away, Asplund jumps in, change sides behind the net, Victor Olofsson’s open,” Granato explained. “And so we pushed depth, we changed sides, which causes coverage change, find a pocket. And that was a very, very big goal in how it happened. That was something we weren’t willing to do enough early on.”