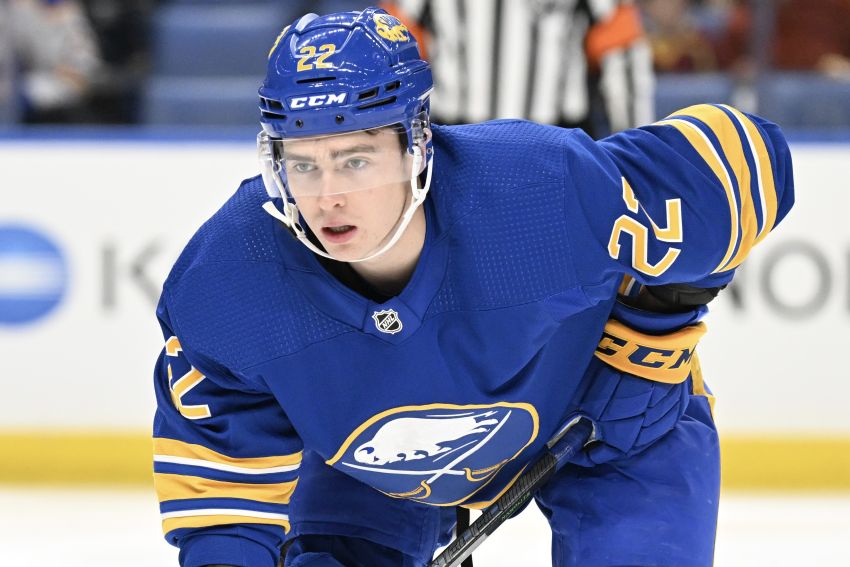 BUFFALO – For a day or two, rookie Jack Quinn is technically a member of the Rochester Americans again. In a paper move on Thursday morning, the Sabres loaned the winger to their AHL affiliate to create room to recall goalie Ukko-Pekka Luukkonen.

Quinn, 21, isn’t going anywhere. The Sabres needed a roster spot and he can be assigned to the minors without waivers.

General manager Kevyn Adams said on Monday the Sabres would have to make daily moves to keep three goalies – Luukkonen, Craig Anderson and Eric Comrie – in the fold.

Earlier this this week, the Sabres decided to scratch Quinn and rookie winger JJ Peterka, who turns 21 on Saturday, to help them deal with their struggles.

Quinn wasn’t going to play in Thursday’s 4-2 loss to the Winnipeg Jets at KeyBank Center, so it made sense to take him off the roster. Peterka was a healthy scratch again Thursday.

Update: Quinn has been recalled. In another paper move, center Peyton Krebs has been sent to Rochester.

The Sabres want Quinn and Peterka, both of whom sat out Tuesday’s contest, to take a step back and regroup.

“It’s beneficial for players at times (to sit), and most of the times it fits in the category of a young guy, to step back for more than one game,” he said. “I think the first game you have a different set of emotions past the first game and you can pick up different things and we can work with them on different things through the course of a couple days.”

Granato acknowledged that Quinn and Peterka have hit a wall halfway through their first season. Quinn has recorded zero points in his last nine outings, while Peterka has registered two assists during that stretch.

“If I date back to two games ago, they were still generating, they were still showing the skill, there were opportunities to make a play or whatever, they just didn’t do it, they just didn’t finish,” Granato said. “So the real positive side of it is you could see that the opposing team was still having lots of trouble based on their skill level. I think based on potential for fatigue, their ability to execute, just finish it off, hit the net instead of miss their scoring area, I think that’s where you saw that the fatigue.”

Adams has been managing his 23-man roster all week. On Wednesday, he lost defenseman Casey Fitzgerald on waivers, a move he made to activate defenseman Henri Jokiharju from injured reserve.

Naturally, Adams must make some difficult decisions. Yes, Quinn could simply be sent down. But, for example, he could feel like he got demoted. He has a two-way contract, so his salary dips from $832,500 to $80,000.

“What you rely on now is relationships you’ve built with him, primarily the understanding and feel he has that we are very engaged with his development,” Granato said of communicating with Quinn. “We believe in him, his abilities right now and his potential day by day. This fits, it’s OK.”

“Again, we’re juggling roster spots. We have a need to it. We lost Fitzgerald on waivers yesterday, obviously no one wants to lose players but you also have to manage, you only have 23 spots. So today the management of that fits with Jack being put on that transaction.”

In another paper move on Monday, the Sabres loaned Luukkonen to Rochester to make room for Comrie. The Finn was supposed to start Tuesday against the Seattle Kraken but came down with a “food poisoning kind of thing.”

Comrie, who replaced Luukkonen on Tuesday, backed him up against the Jets. Anderson was the odd goalie out.

Meanwhile, after sitting out as a healthy scratch on Tuesday, defenseman Jacob Bryson replaced Kale Clague.

“It’s important to get Jacob back in,” Granato said. “He’s had some ups and downs during the year, but, again, he’s a young guy, not a lot of NHL experience. He’s gotten in a rut at times. It can be prolonged because he doesn’t have the experience to know how to push out of it. And he’s gonna do it, he’s going to push out of it, he’s going to be better because of the challenges he’s had.”