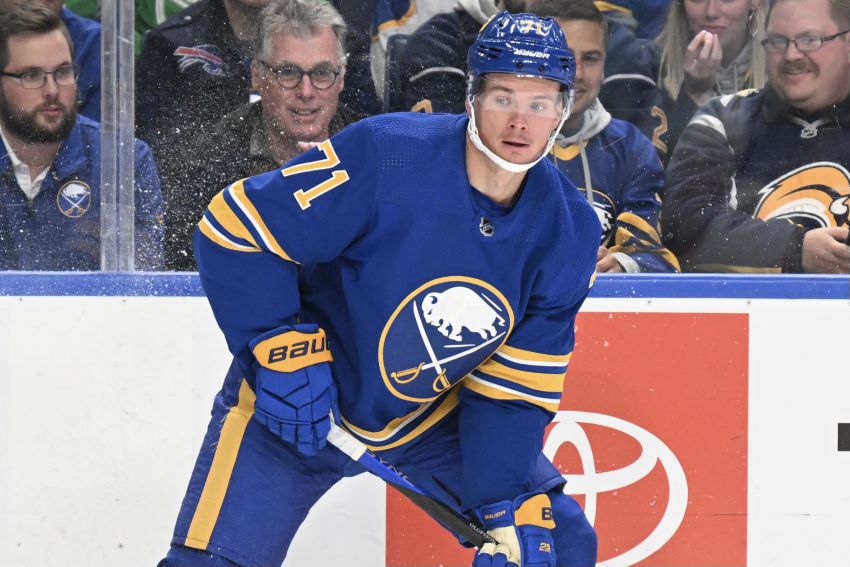 BUFFALO – At 6-foot-4 and 207 pounds, Connor Hellebuyck can be an imposing presence in net. The Winnipeg Jets goalie, the 2019-20 Vezina Trophy winner, plays even bigger than his hulking size might indicate.

“Hellebuyck looked like a sumo wrestler with athleticism,” Granato said following Hellebuyck’s stellar 39-save effort in Thursday’s 4-2 loss to the Jets. “He was good. He was big and solid.”

Following two losses in which they scored three total goals, the Sabres recaptured their slick form on Thursday, showcasing an aggressive style before the crowd of 15,208 fans at KeyBank Center.

“A really important factor for us tonight was to get back to our game, play a higher tempo, higher-paced game,” Granato said.

The Sabres, whose 153 goals rank second in the NHL, created plenty of offense against the stingy Jets. Hellebuyck just stymied most of their chances.

“They played with a lot of intent to try to deny that, deny that high-paced game even though they’re a very high-paced team,” Granato said. “They were aggressive defensively, they clogged the neutral zone up very well. We had to work hard to get our ice and create our ice.

“I thought our guys did a nice job to do that and got some volume of opportunity that Hellebuyck could – he was good, he rose. He was their best player tonight.”

Still, they stayed in the game, nearly grabbing the lead shortly before Winnipeg star Kyle Connor scored the go-ahead goal 7:19 into the third period.

“We did have enough opportunity right down to the last one when they got their game-winning goal,” Granato said.

“It looked like we had a perfect chance to go up 3-2,” Granato said. “And in 10 seconds, you know how that happens sometimes and it happened tonight.”

“I couldn’t kind of get the shot away so I was just whacking at it, but his stick was there so I couldn’t get a shot away,” Jost said. “… It stings but I think you’ve got to look at some of the positives that we did. We did get rolling there and we had a lot of opportunities and a lot of chances. We’ve just got to bear down and capitalize.”

“We actually talked about that this morning, being more aggressive and having a bit of our swagger back,” Sabres winger Casey Mittelstadt said. “I thought especially throughout the game it started to come back and we started making the plays we’ve been making all year.

“We’re going to hit a couple stretches like this,” Mittelstadt said. “What makes me excited is we have such a tight group and we’re going to stick together through anything.”

Granato will likely keep sticking with the Jost, Mittelstadt and Olofsson trio, the Sabres’ best line against the Jets.

Olofsson tied the game at 1 12:02 into the second period, his third goal in the last four contests following a seven-game drought. Jost’s goal 2:50 into the third period knotted the game at 2.

The line generated a gaudy, team-high 80 percent Corsi For against the Jets, according to NaturalStatTrick.com.

“They worked hard to break through and actually find ways to feel good about their game,” Granato said of the line. “You can see now there’s a whole other level of confidence to them, which means they’re feeling much better. They’re in sync. They constantly communicate, the three of those guys, every rush or rep in practice, every shift back on the bench.”

Olofsson said: “We’ve been talking a lot, too, to just create scoring chances as soon as we win the puck, and I think we’ve been way better in the last couple games of doing that.”

Luukkonen made 23 saves in his first loss in seven starts. Samberg and defenseman Josh Morrisey scored the Jets’ other goals.

Samberg and defenseman Josh Morrisey scored the Jets’ other goals before Karson Kuhlman added an empty-netter.