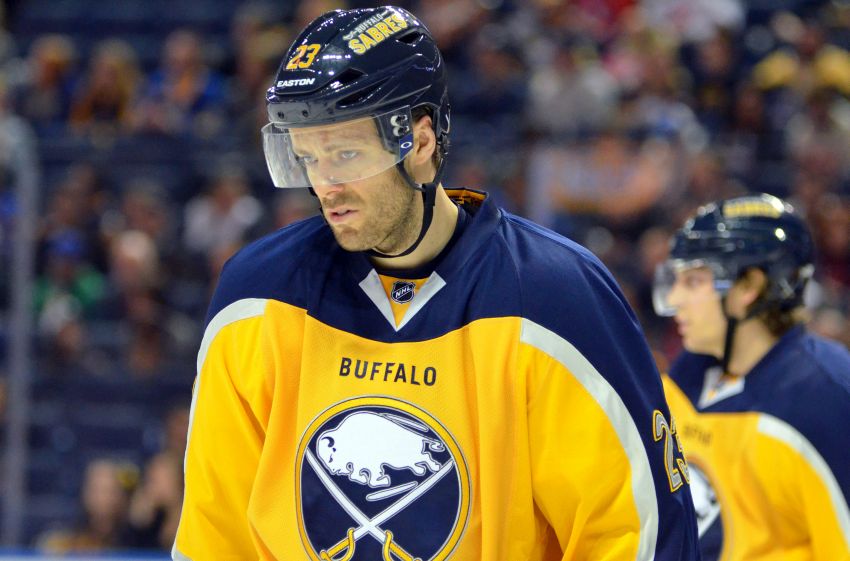 BUFFALO – As expected, the Sabres placed Ville Leino on unconditional waivers Tuesday and will be using a compliance buyout on the final three seasons of the Finn’s six-year, $27 million deal, ridding themselves of perhaps the worst contract in NHL history.

When he wasn’t battling a series of injuries, the 30-year-old forward produced only 10 goals and 46 points in 137 games with the Sabres, including zero goals in 58 appearances during a wretched 2013-14 campaign.

“It wasn’t unexpected, let’s put it that way,” Markus Lehto, Leino’s agent, said about the buyout by phone Tuesday.

The Sabres owe Leino two-thirds of the $11 million remaining on the final three years of his contract. Leino’s $4.5 million salary cap hit is gone.

The buyout is the sixth-largest in NHL history, according to capgeek.com, ranking behind only Vincent Lecavlier, Rick DiPietro, Ilya Bryzgalov, Alexei Yashin and Mikhail Grabovski.

Given Leino’s meager production, his NHL career could be over. There’s zero chance a team will claim him. One rumor has him returning to his native Finland to play for Jokerit Helsinki, which begins play in the KHL next season. Leino played his last European season with that club in 2007-08.

Lehto said Leino wants to stay in the NHL.

After struggling to stay in the lineup with Detroit and Philadelphia in 2009-10, Leino had seven goals and 21 points in 19 playoff games as the Flyers reached the Stanley Cup final later that season. Leino then had 19 goals and 53 points in 2010-11, his first full NHL season. He also scored the overtime winner in Buffalo in Game 6 of the Eastern Conference quarterfinal.

So with Brad Richards the only name center on the market that summer, former GM Darcy Regier got creative, overpaying for Leino, who had only played wing during his brief NHL career. The Sabres said Leino, a center in Europe before coming to North America, wanted to go back to the middle.

Sabres coach Ted Nolan immediately upped Leino’s ice time when he replaced Ron Rolston in November. But Leino blew his fresh opportunity, becoming a healthy scratch within weeks, a sign his days in Buffalo would be ending.

Right now, the Sabres have just $35,930,555 committed to 15 players for next season, according to capgeek.com, $18,080,834 under the salary floor. The Sabres still have one compliance buyout, a tool teams have been using to get under the cap since it was lowered last year.

In this case, the Sabres used a buyout for a different purpose.