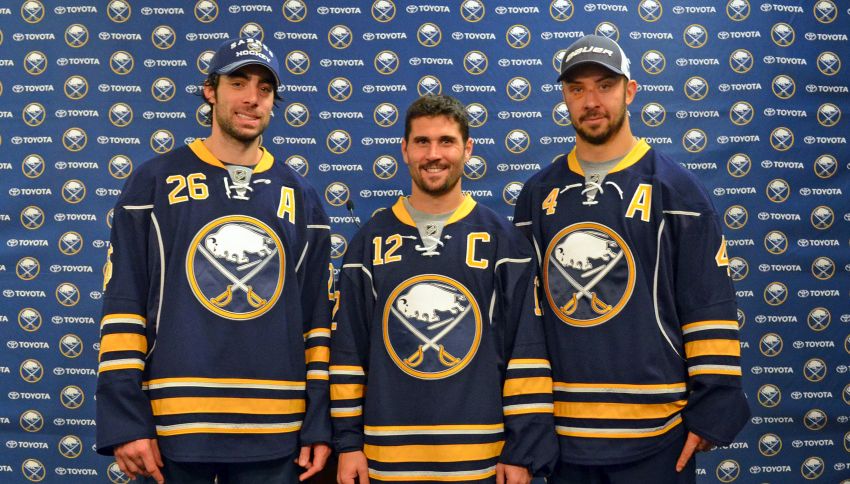 BUFFALO – For the first time in years, the Sabres have stability in their leadership group.

Captains Brian Gionta and alternates Josh Gorges and Matt Moulson have a combined 12 years left on their contracts. Each veteran chose to join the rebuilding Sabres this offseason.

“Coming in, going in a new direction, I just thought new leadership, a new approach – new everything,” Nolan said this afternoon inside the First Niagara Center following the captain announcement. “We’ll have a nice, fresh start for everyone. These three guys, you watch them in practice, you watch them in the room. We were watching them from the first day we met on how they interact with other people. To me, that really shows the type of people they are, the type of leaders they will be.”

Having served as the captain of the storied Montreal Canadiens for four seasons, Gionta’s a proven leader.

When the Sabres signed the 35-year-old winger July 1, many figured he would be the Sabres’ next captain.

“It was just one of those obvious choices when Brian signed here in the offseason,” Nolan said.

Nolan joked: “I bet you didn’t see that one coming.”

Gionta, a Greece native, never expected the captaincy, however.

“It speaks to the direction ownership, management, coaching staff, the players, the direction we want to go,” he said. “Everybody’s on board.”

Check back later for a full story on the new leadership group.

In other news, the Sabres must make some roster moves before 5 p.m. to reach the 23-man limit.

For the time being at least, 19-year-old defenseman Nikita Zadorov has a roster spot.