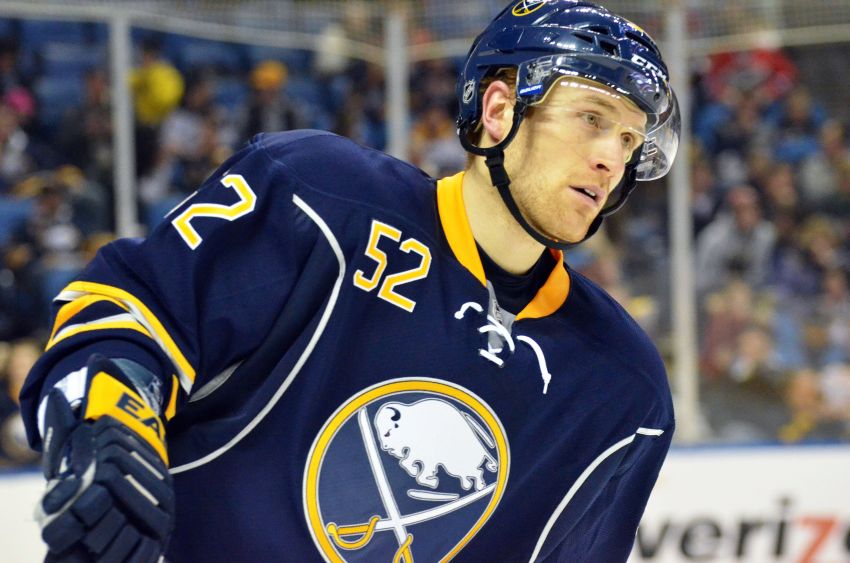 BUFFALO – When defenseman Alexander Sulzer caught his skate in a rut and twisted his knee early in the Sabres’ 4-0 loss to the New York Islanders on Feb. 23, the defenseman immediately knew something wasn’t right.

“I felt that something happened,” Sulzer said prior to the Sabres’ 5-4 shootout win over the Toronto Maple Leafs on Thursday inside the First Niagara Center. “It was really painful. I didn’t know how bad it was. But I could tell it didn’t feel right.”

After the swelling went down, doctors determined Sulzer had torn his ACL. He recently underwent successful surgery and is out for the rest of the campaign.

“Obviously, it was pretty tough,” Sulzer said about hearing his season was finished. “I finally got to play here and found my spot, and then to have that happen to me doesn’t help me.”

The 28-year-old German faces a four-to-six month recovery period. He believes he’ll be ready for training camp. He has hurt his shoulder badly three times in the past, so he’s used to a long and rigorous rehab.

Right now, he’s sporting a cast around his right leg and getting around on crutches.

“It’s not bad. It’s not really pleasant,” Sulzer said about how he feels. “I still have some waves of pain. I can get around OK. … It’s getting better every day.”

The timing couldn’t have been any worse for Sulzer, who had finally established himself as an NHL regular with the Sabres after playing sparingly with three other organizations over four years.

“Obviously, it was pretty tough,” Sulzer said. “I finally got to play here and found my spot, and then to have that happen to me doesn’t help me.”

He added: “I would say it was probably the high in my NHL career so far.”

Sulzer, acquired from Vancouver for Marc-Andre Gragnani late last season in a swap of extra defenders, surprised the Sabres, carving out a regular spot beside Christian Ehrhoff almost immediately.

The Sabres re-signed Sulzer to a one-year deal in May. He had three goals – still tied for tops among Sabres defensemen – four points and plus-3 rating while averaging 16:31 of ice time during 17 appearances.

Sulzer wants to return to the Sabres next season.

“I like being here,” he said. “I like playing for the Buffalo Sabres. All I can do now is do my rehab and get healthy, see what the team thinks about it.”

Rolston hopes Vanek, who has a team-best 14 goals and 31 points, will skate today. He could play Saturday in Montreal. Vanek has missed four games this season.

Meanwhile, winger Nathan Gerbe, who has only three goals and six points, was benched a second straight game.

“It was a situation where I think he’s working hard but we have to make some tough decisions right now in our lineup,” Rolston said about Gerbe’s first scratch. “We can only have 12 forwards in there. He was a player that … didn’t give us a reason to keep him right now, and that’s what he has to work for.”

Following goalie Jhonas Enroth’s strong 34-save performance in the Sabres’ 3-2 overtime triumph Tuesday in Montreal, Rolston and his staff considered giving the backup another start.

“We like what Jhonas is doing and how he’s building his game and building confidence, and certainly he’s given us two big wins here recently,” Rolston said. “But we wanted to get Millsie back in.”

With Enroth playing well again, Miller should keep receiving some regular breaks. He had last started Sunday. Prior to that, he had a four-day break after Enroth played last Tuesday.

The Sabres completed a stretch of four games in six days Thursday.

The Leafs played without high-scoring winger Joffrey Lupul, who was suspended two games for hitting Tampa Bay’s Victor Hedman in the head Wednesday.

One thought on “Sulzer disappointed season over, hoping to re-sign with Sabres”