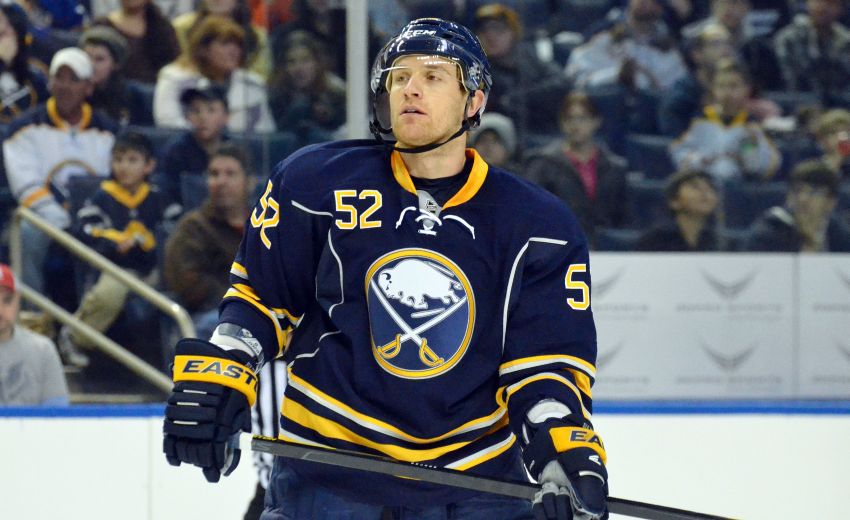 BUFFALO – When was the last time Alexander Sulzer started an NHL season confident he could be a regular?

Having a roster spot isn’t new for Sulzer. He’s spent parts of the past four seasons in the NHL, including the last two from beginning to end. It’s just that he rarely played prior to his Feb. 27 arrival from Vancouver.

From the start of 2010-11 until he began regular duty with the Sabres on March 7, the German sat 65 percent of his team’s games, making only 53 appearances. The Canucks scratched him 51 times last season.

Right now, the Sabres possess a glut of defensemen. Nine are battling for seven or eight spots. Only six will dress. Barring a practice injury, one will almost certainly get traded or waived before opening day Sunday.

So far, no one’s talking about the 28-year-old Sulzer, who’s back skating beside countryman Christian Ehrhoff, leaving or even being scratched.

“Yeah, it’s really good,” Sulzer said about his situation. “I mean, for now (I’m practicing) with Christian and I hope I’m going to play with him, too. I haven’t gotten the confirmation that I’m actually in the top six. But, yeah, (I’m) excited to get a chance again to prove (myself).”

Sulzer began proving himself shortly after the Sabres swapped seventh defensemen – Marc-Andre Gragnani went to the Canucks – in what was thought to be a minor footnote to the Cody Hodgson trade.

Ehrhoff and Sulzer instantly began showcasing strong chemistry, playing like they had been partners for years. Ehrhoff’s the slick puck-rusher. Sulzer’s the defensive guy, although he moves well and isn’t afraid to pinch.

Why did they work so well together?

“It’s tough to point a finger, it’s tough to say,” Ehrhoff said. “It clicked. It’s tough to explain. We’re from the same country. It’s not necessarily the reason for that but it just seemed to click.”

Sulzer said: “I think we just trust each other out there and we reap off each other, just try to keep it as simple as possible and move pucks quick. I think the biggest part is just reading off each other.”

“It seemed that they fit together,” Ruff said. “Obviously, we were in need of defensive defensemen. It was sort of an automatic fit. Everything went right for him, and you can hope that he can build off that.”

Despite his journeyman status, Sulzer never seriously considered ditching the NHL and going back to Europe, where he had played five seasons before coming to North America in 2007.

“I mean, it crosses your mind there’s that option,” said Sulzer, who spent the lockout playing in Germany. “But I was never at that point where I’m like, ‘OK, that’s it. I’m going to give up and go back.’ For us Europeans, it’s probably a good thing to know and have in your head. It’s not the end of the world playing in Europe.

“But obviously your dream is playing in the NHL. That’s what you work for as hard as you can every day.”

Ehrhoff, meanwhile, is trying to rebound from a solid but somewhat disappointing campaign in which he battled injuries. In the first season of his 10-year, $40 million contract, the 30-year-old had only five goals, 32 points and a minus-2 rating in 66 games. He had averaged 14 goals, 47 points and plus-28 rating the previous two seasons.

After accumulating 51 power-play points in two years, he dropped to just 11 last season as teams keyed on his wicked shot from the point.

“I thought I had an impact here,” Ehrhoff said. “Obviously, one stat that wasn’t that good was the power play points. I think we can do a lot better on the power play. … It was a little inconsistent last year.”

The season-ending knee injury Ehrhoff suffered March 27 in Washington didn’t fully heal until around the middle of the summer, he said.