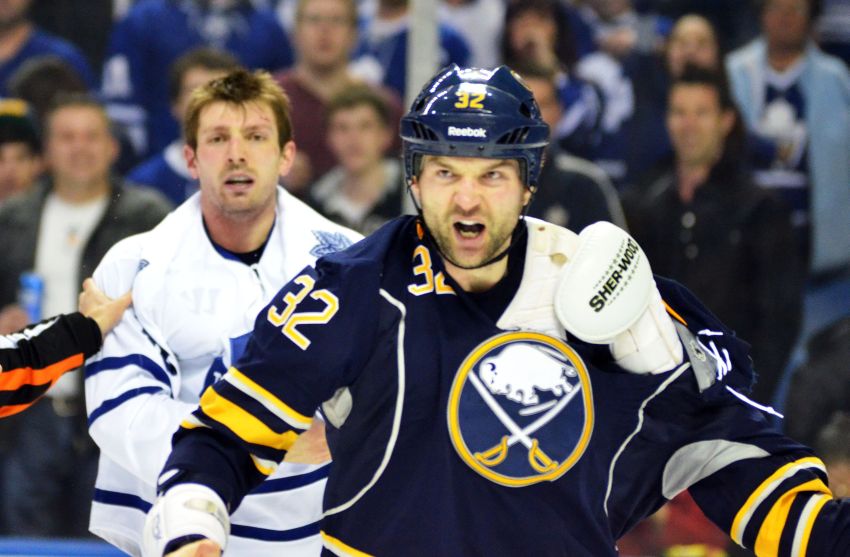 BUFFALO –For 65 wildly entertaining minutes Thursday, the Sabres and Toronto Maple Leafs fought, traded goals and battled for every inch as they zoomed up and down the ice before a noisy bipartisan crowd of 19,070 fans inside the First Niagara Center.

The Sabres’ 5-4 shootout victory was NHL hockey at its fiercest and most exciting.

“They got their money’s worth tonight,” interim Sabres coach Ron Rolston said about the capacity crowd.

Fittingly, Sabres agitator Steve Ott, who buzzed around all night thumping Leafs during the ultra-intense tilt, scored the winner in the top of the sixth, roaring in and backhanding a shot past Leafs goalie James Reimer.

“He’s been playing great for us,” said winger Patrick Kaleta, the Sabres’ other agitator. “As we like to call him, ‘Daddy’ came through. He did a great job all night. I’m happy he’s on my side.”

Wait, the Sabres call Ott what?

“You’re going to have to ask him that,” Kaleta said. “I think he likes to call himself ‘Daddy’ a little bit, too.”

In erasing two two-goal deficits, the Sabres crept up from 13th to 11th place in the Eastern Conference. Believe it or not, they’re only four points (32-28) behind eighth-place Carolina, which has a game in hand.

The Sabres showed they wanted the game badly early on. This one was crazy from the get-go.

Mayhem ensued after Kaleta hit a Leafs player about two minutes into the contest.

John Scott, the Sabres’ hulking tough guy, chirped with enforcer Frazer McLaren prior to the next faceoff. As soon the puck dropped, the heavyweights scrapped.

Kaleta and Orr then fought as Scott and McLaren tussled.

“Myself and my brother had a couple scraps when I was younger, so I’m used to taking punches like that,” Kaleta said. “So it all worked out. I’m pretty happy because I like getting stitches and stuff like that. It makes me look and feel a little bit manly.”

When Scott’s bout ended, he waived his arms up, bringing a roar from the crowd.

Orr earned the instigator and a game misconduct.

“I guess you’re not allowed to blow guys kisses on the ice,” Ott said. “I’ll stick those kisses back in my mouth.”

Too bad it was the teams’ fourth and final meeting this season.

Tyler Bozak scored on the ensuing power play at 8:48.

“That’s easy energy you can take from the crowd,” Ott said. “Being a type of energy player that draws from those type of situations, at times, obviously, I was a little too emotional, costing my team a little bit there.”

“It’s a rivalry, and we want to make sure we’re matching,” Sabres winger Marcus Foligno said. “We had to come out with a tempo. They got two quick goals, but I still think we had a lot of momentum. The fights and the way we were hitting helped out a lot.”

Goals from Foligno and Jason Pominville tied it before the second period ended. Then Christian Ehrhoff’s wicked power-play blast gave the Sabres their first lead 22 seconds into the third period.

A few weeks ago, the reeling Sabres might’ve lost a game like Thursday’s.

“The bench is a lot better now,” Rolston said. “You can feel the confidence coming in when you get down we can battle back if we stay with things.”

Ott added: “They’re a physical team. But we matched size for size, hit for hit. That’s why it was a 4-4 game and a shootout at the end of it all. Those are the fun ones to get the win.”

The Sabres can thank Ott, who also scored the overtime winner in Tuesday’s 3-2 triumph in Montreal.

“He’s playing great right now,” Foligno said. “You can’t say enough about him. He’s a wrecking ball, and we all knew in the shootout he was going to do that move.”