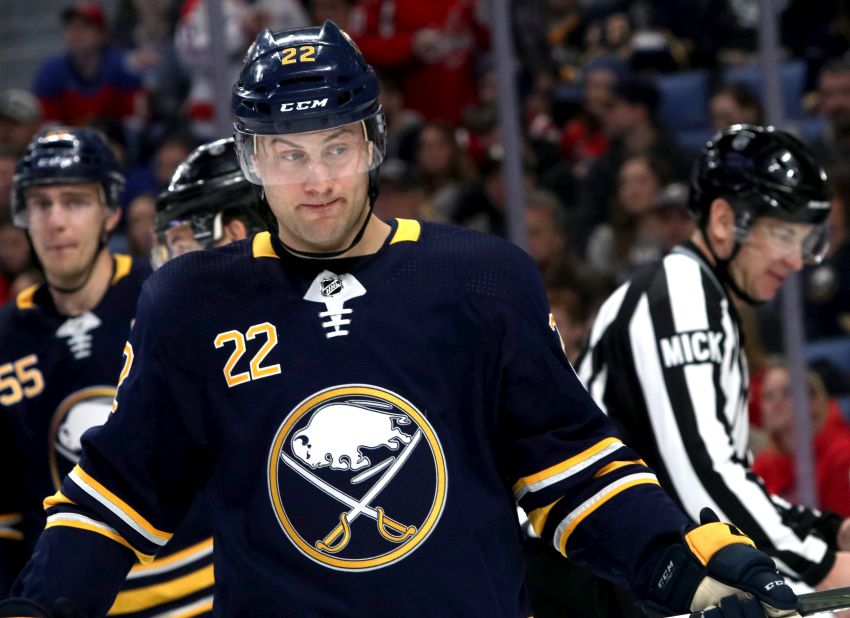 Johan Larsson has been one of the Sabres’ mainstays. ©2019, Janet Schultz

Earlier in training camp, there was speculation Larsson’s long tenure with the Sabres could be ending.

The Sabres have boosted their depth. They have Ralph Krueger, another new coach.

But it sure sounds like Larsson, a mainstay throughout all the losing and upheaval, has possibly secured a roster spot to start his seventh season.

“We see Johan as a stabilizing type of player that’s consistent within what we need to do, especially without the puck and on the puck,” Krueger said.

The Sabres still have 18 forwards in camp. That high number, of course, will be whittled down in the coming days.

Krueger, who wants to give everyone a clean slate, said earlier this week the Sabres could carry 14 forwards.

“We have a lot of competition, a lot of good guys,” Larsson said of the forward group. “I think we have four good lines.”

On Friday inside Harborcenter, Larsson, 27, centered the fifth or sixth line between Zemgus Girgensons and Curtis Lazar.

The 5-foot-11, 204-pound Larsson will likely play in this afternoon’s preseason finale in Pittsburgh. He missed about a week after suffering an upper-body injury early in camp, so Krueger probably wants to examine him against the Penguins.

Krueger said the lineup will mostly feature depth players and others battling for spots.

In past years, Larsson’s spot was usually pretty secure. At his best, the Swede can be a tenacious checker capable of chipping in some clutch offense. In 2015-16, five of his career-high 10 goals were game-winners.

But about halfway through 2016-17, Larsson dislocated his elbow and wrist. He struggled after returning the next season, compiling a ghastly minus-30 rating.

While Larsson enjoyed a better year in 2018-19 – general manager Jason Botterill and former coach Phil Housley challenged him to change – he didn’t like his role.

“It was too much maybe defensive last year,” said Larsson, who signed a one-year, $1.55 million contract on July 12. “I think it got too much. I think I kind of want to be an offensive guy, too. It kind of took away from me.”

Larsson started only 15.6 % of his even-strength faceoffs in the offensive zone, according to hockey-reference.com. He scored six goals and 14 points in 73 games.

Still, Larsson said he never spoke to Housley about changing his role.

Krueger acknowledged he’s still “getting to know” Larsson as a player. But from what he has seen, he believes Larsson can add more offense.

“Every line should be a threat to score. We expect Johan has that ability to take it to another level when you look at his skill set.”

Does Larsson believe he can showcase more offense?

“It’s hard for me to say,” he said. “I’ve always been a guy (who) worked for my ice time, I work for my opportunity. It’s not going to change.

Larsson is one of three Sabres left from the 2013-14 squad that finished dead last in the NHL. Girgensons and defenseman Rasmus Ristolainen are the others.

Don’t expect either team to show much this afternoon. They meet again for the season opener Thursday in Pittsburgh.

“I’m pretty sure it’s going to be a game where it’s lines rolled and different looks taken,” Krueger said. “There’s no need to reveal any card. Now Pittsburgh has a lot less to hide because they’ve got a very similar core group, coaching staff, management. …

“So it’s us that will maybe just roll and play and … hopefully save some secrets.”