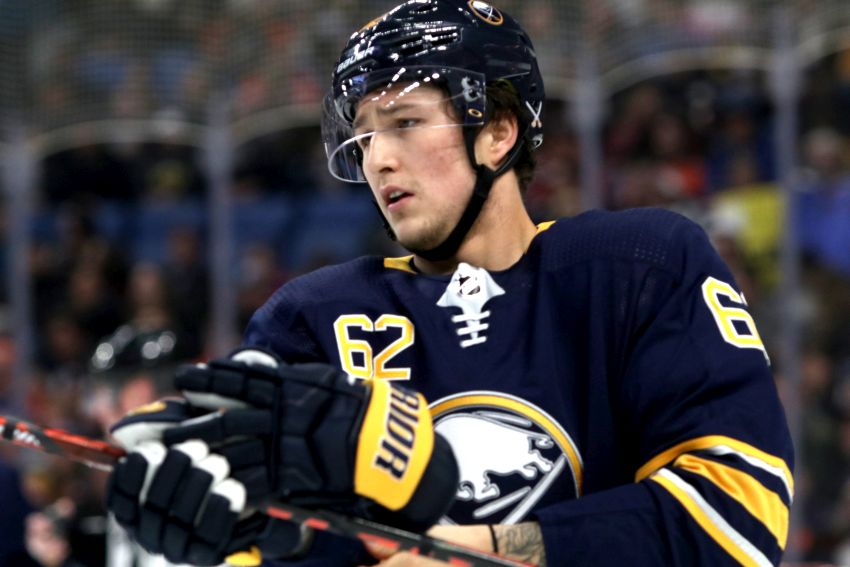 BUFFALO – The good news for the Sabres is defenseman Brandon Montour’s hand injury probably won’t sideline him too long.

While Montour will miss the rest of the preseason, Sabres coach Ralph Krueger said he should be ready “pretty soon” after the season opener Oct. 3.

The Sabres, who began training camp down three defensemen, could ill afford to lose another one, especially a point-producer capable of eating up minutes.

“He’s a very big deal,” defenseman Rasmus Dahlin said after the Sabres prepared for tonight’s road game against the Toronto Maple Leafs, the start of a home-and-home series. “He’s done a lot for our team.”

Krueger, who wouldn’t say if Montour’s hand is broken, usually finds a silver lining in any difficult situation, and he was no different Thursday.

The Sabres possess much more defense depth than in recent seasons, and Krueger wants to see it in action.

“We’re deep,” Sabres defenseman Casey Nelson said inside KeyBank Center. “We got a lot of guys … that can step in and play a role.”

So over the final four exhibition games, expect some defensemen competing for roster spots – Nelson, Will Borgen, John Gilmour, Henri Jokiharju and others – to earn more minutes.

“You wouldn’t want it to creep in this quickly, but it gives us opportunities, so we feel confident that we can start with a solid D corps group,” Krueger said of the depth. “But to tell you the truth, we weren’t too sure on the mix.

“There’s a few players that we all know would be in that top six, but there was some question marks. This gives us an opportunity to get to know the six that will be eventually starting. …

“It is an opportunity, but we’d like to stop it here with the testing of our depth.”

Even Krueger can only handle so much.

Hunwick is out for the season. Bogosian and Pilut, meanwhile, are expected to miss at least the early portion of the campaign after undergoing surgery during the offseason.

The Sabres believe Montour can be a major contributor. They paid a hefty price – defense prospect Brendan Guhle and a first-round pick – to acquire him from the Anaheim Ducks on Feb. 24.

In 20 games with the Sabres last season, Montour compiled three goals and 10 points and averaged nearly 22 minutes an outing.

Following the season, Montour hurt his knee playing for the Team Canada at the World Championship.

“He can keep his lower body moving, which is important,” Krueger said. “He’s worked so hard off the knee injury to get up to speed, so if there is a positive in this, it’s that.”

Jokiharju, 20, might have a spot to lose now. The Sabres dealt winger Alexander Nylander to the Chicago Blackhawks for the Finn on July 8, a swap of former first-round picks.

So far, Jokiharju, who scored in Monday’s 5-4 overtime win over the Pittsburgh Penguins, has impressed Krueger.

“He’s definitely a player who’s got a presence,” Krueger said. “I think with the puck he’s quite confident but without the puck, we like his presence and his ability to be able to see his job and get it done and try to finish it.

“So there’s an aggressive side to him that we can definitely work with. There’s quite a complete player there.”

Jokiharju, a right-handed shot, has been playing on the left side. Playing on their off side can be difficult for defensemen.

“I prefer the right side better, but if I have to play the left side, I’m fine with that,” Jokiharju said.

Krueger said Jokiharju will likely be moved back to the right. Still, a surfeit of righty defenders – the Sabres have seven in camp on NHL contracts – could force some to play on the left.

“He’s a pretty big D (6-foot-4) and he’s played in the league for a lot of years, so I got a lot to learn from him,” Dahlin said. “We know each other pretty well off the ice, too. On the ice, we’re comparing to each other very well, actually.”