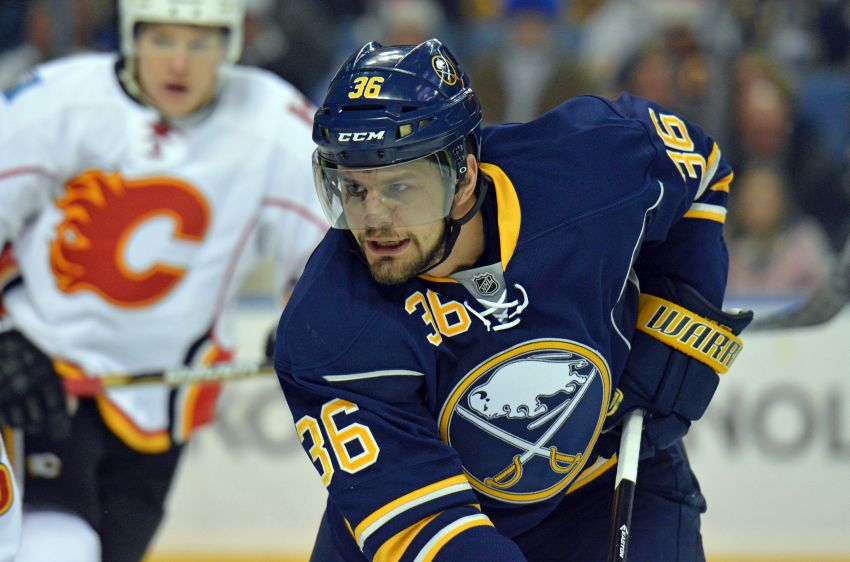 BUFFALO – Yes, 30 games into the season, the Sabres still possess the NHL’s worst offense. At their current pace, they would score 142 goals, eight fewer than last year, when they set the NHL’s all-time low mark for a full campaign.

But the Sabres’ offense is no longer feeble. At times, it can even be downright dangerous.

They have eight goals in their last two outings, as many as they scored in their first eight games. Six different players have scored in the last two contests.

The Sabres have rallied from a third-period deficit in four of their last five wins, including Saturday’s 4-3 overtime triumph against Florida.

Every line contributed versus the Panthers. Cody Hodgson, Marcus Foligno and Brian Gionta scored in regulation before Tyler Ennis’ slick pass set up defenseman Nikita Zadorov for the winner. Eleven different players recorded a point in the game. Every skater on the roster finally has a point.

A balanced attack has helped buoy the Sabres, who host the Ottawa Senators tonight at the First Niagara Center.

“That’s exactly what we talked about,” Sabres coach Ted Nolan said Saturday. “We’re trying to build a team. A team usually doesn’t rely on one line. That’s where I made reference to Cody Hodgson. It’s not just Cody, it’s his wingers, it’s people that are playing with him that can help make him better. We’re the type of team that need all 20.”

In his return from a one-game benching, Hodgson played one of his best games this season, scoring his first goal since Oct. 25 just 2:06 into the tilt.

Hodgson, a scorer his entire career, pressed so much recently he began playing out of character and trying to do too much. Nolan told him to concentrate on what he does best.

“I talked with Ted on the ice about that exactly,” Hodgson said after his 19-game goal drought ended. “I was trying to do everything, try to be a real complete player – blocking shots, hitting guys, first on the forecheck.

“We have some very talented guys that are really talented at that. Let them do that. They can create a lot of loose pucks. I think (Patrick) Kaleta’s awesome at that, same thing with (Chris Stewart). They got in there and turned pucks over and allowed me to move into the slot and get some opportunities.”

The season-long struggles have been tough on Hodgson. But watching one game up top from the press box taught the 24-year-old he has more time on the ice.

“You’re doing the right thing and bounces aren’t happening,” Hodgson said about his slump. “It’s off by half a centimeter, but I think watching it up top you can tell that half a centimeter makes a big difference. So if you take your time, settle the puck down, you have more time than you actually think to shoot or make a play.”

Kaleta made a nice play on Hodgson’s goal, a nifty backhand pass from the left corner, his first point since scoring a goal April 7, 2013, a 20-game stretch. He hadn’t recorded an assist since March 7, 2012, a 60-game stretch.

Injuries – a torn ACL and a broken face – have limited Kaleta to just 14 NHL games in the last two seasons.

“It’s always a bonus, but I’ll be honest with you, I’m not worried about points whatsoever, especially with me coming back from the injuries that I’ve had,” Kaleta said. “It’s getting back and playing smart defensively, getting my PK going and just getting my routes and everything down.

“Once I get going here, the points are a bonus, and when the time comes, hopefully I’ll adapt more of the offensive side of my game.”

Kaleta believes teammates “owe” the No. 1 line of Ennis, Zemgus Girgensons and Matt Moulson some goals.

“It’s our job to go out there and help them out with that sort of scoring and things like that,” Kaleta said.

Nine games into his season, Kaleta’s body hasn’t returned to normal yet.

“It takes a while to be fully in the swing,” he said. “I got home and I sit on my couch and I can’t move that well. Just body-wise, it’s getting used to playing the back-to-backs, three games in four nights, getting my body used to that. On the ice, it’s starting to slow down for me, which is good. Hopefully, that’ll be slowing down even more for me through the progression of games.”

Tonight’s game was originally scheduled for Feb. 20, 2015. The Nov. 21 game against the New York Rangers, postponed because of Winter Storm Knife, was moved to that date.

One thought on “Strong, balanced offense has buoyed Sabres during hot streak”