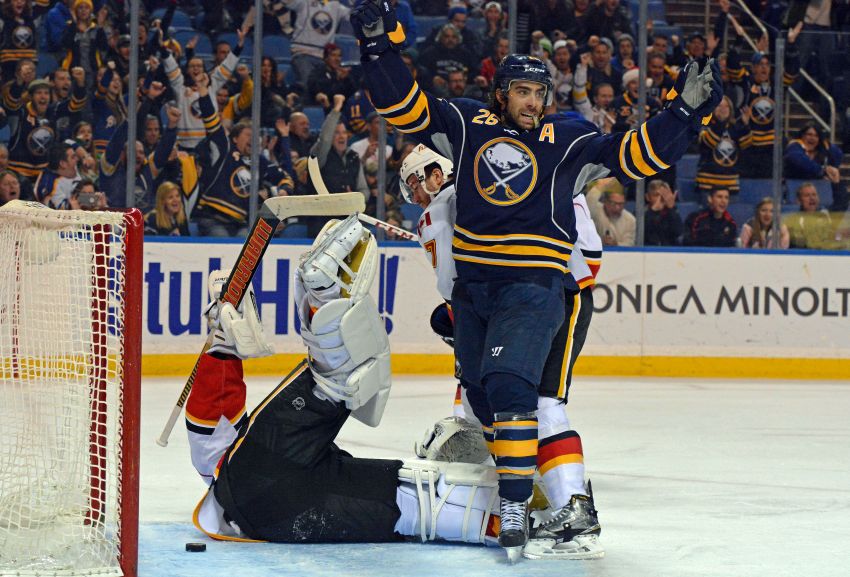 Whatever the case, Moulson was downright terrible earlier this season. At one point during his 14-game goal drought, his wife, Alicia, gave him a little pep talk.

“I remember my wife saying at the start of the year, ‘You’re going to score again. It’s not like you’re going to have zero goals,’” Moulson said Friday inside the First Niagara Center.

These days, having compiled six goals and 12 points in the last 15 games, he’s back on track entering tonight’s game against the Florida Panthers.

The 31-year-old enjoyed arguably his best game with the Sabres in Thursday’s 4-3 win against Calgary, scoring twice and giving the Flames fits on the left wing beside center Zemgus Girgensons and Tyler Ennis.

Moulson, who’s at his best around the net, scored the opening goal and the winner in close. He was also positioned in front ready to score on Girgensons’ goal and slickly undressed Calgary’s T.J. Brodie earlier in the game.

Playing with Girgensons and Ennis on the No. 1 line the past month has ignited Moulson’s confidence. Moulson has been “getting back to things I was doing before,” he said.

“I kind of expected the game to come to me, maybe at the start of the season wasn’t working as much as I should’ve on the ice,” Moulson said. “During the game sometimes you get in slumps and you find yourself standing around a little more often.

“So when you have that confidence, it gives you that little extra jump out there.”

Ennis added: “Multiple 30-goal scorer. He’s such a smart player. I’m fortunate to be able to play with him. It’s a fun line. I know he’s going to be open. I just got to find him.”

Moulson acknowledged earlier this year he was putting too much pressure on himself.

“It’s something that compounds itself,” he said. “You want to do well and you want the team to succeed. … Sometimes it’s a tough thing to get out of because the more pressure you put on yourself, the more you want to do well, the worse you play. So I think that was definitely the case with me.”

“A lot of these guys, they are expected to do certain things, and when they don’t, pressure starts adding and they start squeezing their sticks a little more,” he said. “They want to do so much, and sometimes when you want to do so much, you don’t do too much at all. …

“You got some speed, you got some playmaking,” Nolan said. “Speed and playmaking with a goal scorer usually adds up to good success. Matty has a good nose for the net. He knows how to go to it.”

Of course, it’s no coincidence the Sabres heated up around the same time as Moulson. They have won two straight games and eight of the last 11.

Moulson believes he’s beginning to see the vision he had when he re-signed July 1. He played 44 games here last season during some of the franchise’s darkest days. But he liked Nolan, the team and the Sabres’ plan for the future, so he returned following a 30-game stint in Minnesota.

“We’re starting to go,” Moulson said. “We have a long way to go. But we’re starting to build something. I think we’re believing in ourselves … that’s the biggest thing. That was probably lacking early on. You start off a little rocky and that belief you probably had coming into the season kind of fades a bit.”