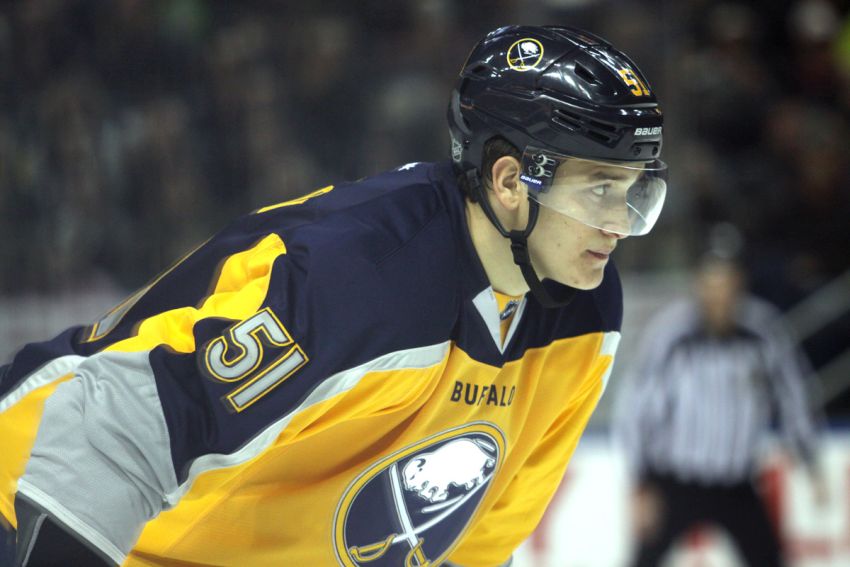 BUFFALO – For much of the Sabres’ exciting 4-3 overtime victory against the Florida Panthers on Saturday, the young defense tandem of Rasmus Ristolainen, 20, and Nikita Zadorov, 19, struggled badly.

Up 2-0 early in the second period, Ristolainen coughed up the puck and the Panthers scored off of Zadorov’s skate. They tied it minutes later with the youngsters on the ice again.

“You don’t belittle, and you don’t blame them,” Sabres coach Ted Nolan said. “You nurture them.”

Zadorov made amends, scoring the winner 29 seconds into overtime, his second NHL goal.

“Finally I did it and it’s a great feeling, especially in overtime in the National Hockey League,” an excited Zadorov said about one-timing Tyler Ennis’ pass in the left circle. “I probably never had that big a goal in my life. It’s a great feeling and I’m going to try to do it again.”

Ennis said he predicted before Zadorov would score.

“I said, ‘I think he’s getting one tonight,’” Ennis said. “I don’t want to say that I called it, but I called it. He did a good job slipping in and I just tried to be patient.”

The Sabres have won nine of their last 12 contests and seven of eight at home. Incredibly, they have trailed in the third period in four of their last five wins.

“We have character,” Zadorov said. “We’re just fighting through.”

A club given up for dead early last month is closer to the final playoff spot (six points) than last place (seven points).

It appeared the Sabres might cruise to an easy win Saturday before 18,450 fans inside the First Niagara Center.

The rested Sabres appeared in complete control against the weary Panthers, who won a shootout Friday in Detroit.

The Sabres had ace goalie Jhonas Enroth and contributions from two unlikely sources to boost what has recently become a strong lineup.

The Panthers roared back, tying it in the second period before Jussi Jokinen put them up 57 seconds into the third period.

Sabres captain Brian Gionta knotted it at 8:57, taking a slick pass from Tyler Myers and beating Panthers goalie Al Montoya as he zoomed in.

“I think tonight (is) another case of not quitting and perseverance,” Nolan said.

The win was costly, however. The Sabres lost two defensemen, Josh Gorges and Andrej Meszaros.

In his return from an apparent concussion, a puck hit Meszaros on the chin. He could be concussed. Gorges, meanwhile, was hurt blocking a shot.

Both are likely out Monday. The Sabres will recall a defenseman from Rochester, Nolan said.

“We’ll cross out fingers and hope for the best,” Nolan said.

Ristolainen and Zadorov are rapidly developing into a strong duo.

“It’s fun to watch,” Ennis said. “You can kind of see them growing up right before our eyes. We all know it’s a rebuild, but you look at the minutes Zadorov and Ristolainen are putting in and they’re putting in really good minutes.”