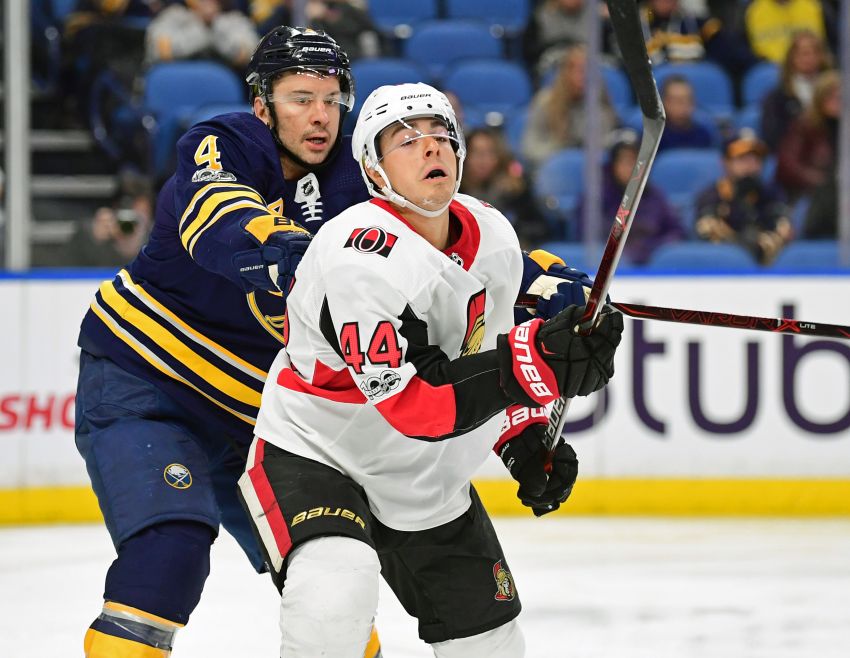 For the 26th time in 45 games this season, the Sabres let an opponent score first.

A lot of ugliness has contributed to the Sabres’ awful campaign. Their wretched starts should be at the top of the list.

Incredibly, the Sabres have finished the first period holding a lead only eight times entering this afternoon’s tilt against the Dallas Stars inside KeyBank Center.

They constantly fall behind early and chase games. They’ve scored an NHL-low 19 first-period goals this season and allowed 41. No other team has scored fewer than 27. They’re 2-15-2 when trailing after 20 minutes.

Why do the Sabres keep falling behind early?

“There’s no real good explanation for it because there’s no excuse for it,” Sabres defenseman Josh Gorges said Friday. “I think at times we’re coming into games waiting to see what the game’s going to be like and what are we up against, what’s coming at us, and you just can’t play that way.”

Gorges said the Sabres must possess a mindset they’re going to dictate the game.

“Play our game, play the way we want to play,” he said. “Let’s push the pace and let’s do what we want to do, force the other team to try to adjust to us. It’s not always going to happen that way, the other team’s going to think the exact same thing we are.”

The Sabres might get a mulligan for allowing an early goal Thursday. They hadn’t played in a week following their bye. To their credit, they tied the game later in the opening period, one of three times they erased a deficit against the Rangers.

“Maybe five days being away from the game your mind is not working the way it should,” Sabres coach Phil Housley said. “I know just at the start of the game our battle level was just a little low. But as we got our feet underneath us I thought we played really well. …

“In the past we’ve had good starts. We just have to warrant against getting scored on early because it sort of puts us back on our heels.”

Sabres center Ryan O’Reilly said: “There’s going to be games where we don’t have our legs right away, and whether it’s simplifying or making better decisions, coming off the bye week, that first 10 minutes was rough. You could see it in us, the jump wasn’t there. But we held our own, we responded well after that.”

After a rough or quiet start, the Sabres often settle in and get back in the contest. While opponents have outscored them a whopping 154-102 this season, they’re only being outscored 48-44 in the third period.

Still, playing from behind in today’s ultra-tight NHL is a recipe for disaster.

“You can’t play that way, you just can’t,” Gorges said. “Once in a while you’re going to have a comeback and you’re going to get a push, but when you’re playing from behind, it’s a tough way to play.”

So what gets the Sabres back in games late? Well, teams sometimes take their foot off the pedal when they’re up big. But the Sabres often start playing more aggressively late, a style Gorges said they need to start showcasing earlier.

“If it comes into the third period and we’re down a goal, you kind of come in with that mindset of, ‘What have we got to lose here?’” he said. “We don’t have a choice, we got to make a push. Then we start doing things where we’re skating a little harder, we’re putting pucks in behind them, we’re getting in the forecheck.

“We’re doing all those simple details for the game that make us successful, and that’s usually the reason we’re behind early, is we step away from that, we try to be too cute, make plays when plays aren’t available, commit turnovers, and we’re chasing – not even the score – you’re chasing the game in general.”