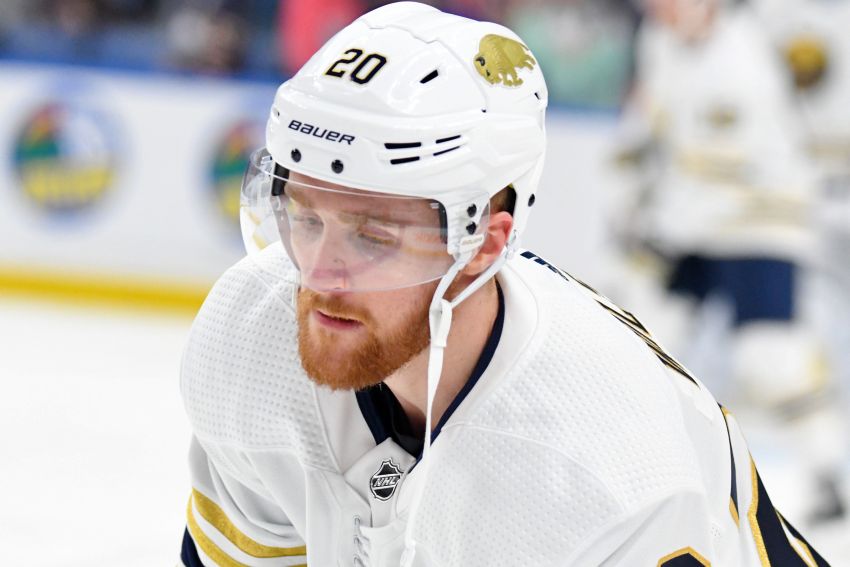 BUFFALO – Earlier in his career, Sabres winger Scott Wilson said he would often run around on the ice, a style that sapped his energy and took him out of plays.

Wilson, 27, realized he needed to embrace a simpler way.

“Being physical when I can but not running around like an idiot,” Wilson said after the turnover he helped create led to center Johan Larsson’s goal in Sunday afternoon’s 3-2 loss to the Anaheim Ducks.

Wilson’s straightforward game has helped him mesh well with his linemates, Larsson and Zemgus Girgensons, since the Sabres recalled him again last week.

Larsson, Girgensons and Kyle Okposo, who’s close to returning from an upper-body injury, have formed perhaps the Sabres’ most consistent trio all season.

“Just simple stuff,” Wilson said of why the line works. “I think with Gussy and Larry, it makes it easy on me. You know what they’re doing almost. We talk about a lot of stuff on the bench.”

“Scott’s just completely embraced what we want to see here,” he said.

“Sometimes when you get called up, you’re not sure of the message from the coaches, but they’ve done a really good job, made it easy on me letting me know what they need,” he said. “I’ve just tried to show that simplicity and work hard for them.”

When the Sabres summoned Wilson in for the first time this season in early January, he played two games and sat out five as a healthy scratch. After returning to the Rochester Americans, he scored three goals and four points in five outings.

“Get a couple goals down there, boost the confidence a little bit with the shot,” Wilson said. “I think just getting down, playing some more games, playing lots, too … makes a difference.”

Wilson scored in his first game back, Thursday’s 4-3 overtime loss to the Detroit Red Wings, his first NHL goal since March 8, 2018.