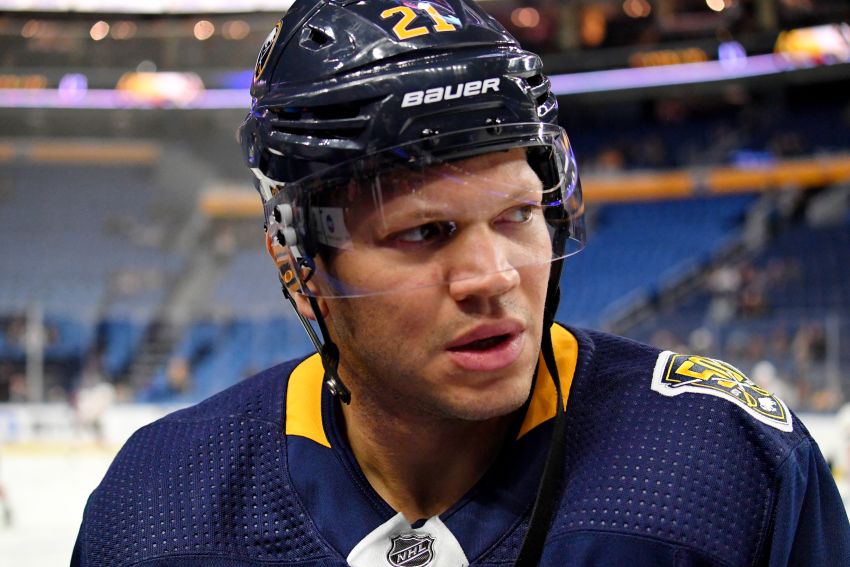 BUFFALO – On Feb. 1, winger Kyle Okposo was cross-checked during his first shift in the Sabres’ 2-1 overtime win against the Columbus Blue Jackets.

“Something broke,” Okposo said after skating with his teammates this morning for the first time since leaving the lineup.

Still, Okposo, 31, tried gutting out what he called “a freak injury” for the rest of the period.

“I knew it wasn’t good,” he said of the upper-body injury. “I tried to make a sauce pass and I couldn’t do it, so I knew it was time to go in.”

Okposo has missed the last five games and will sit out tonight’s contest against the Detroit Red Wings at KeyBank Center.

But the American said returning Thursday or Sunday “are possibilities.” He said he is about a week ahead of schedule. Officially, the Sabres list him as week-to-week.

“We’ll see kind of how I do in a real practice,” he said. “Just a pregame skate today. I’d like to get a good practice in tomorrow and go from there.”

Okposo said the “painful” injury kept him off the ice about a week.

“Any time that you’re out it’s not fun, especially when guys are struggling a bit, so I want to be there for the guys,” he said. “Unfortunately, I wasn’t able to. I’m thankful that it wasn’t more time and I can get back in the lineup pretty soon.”

A lower-body injury has sidelined Olofsson the last 14 games.